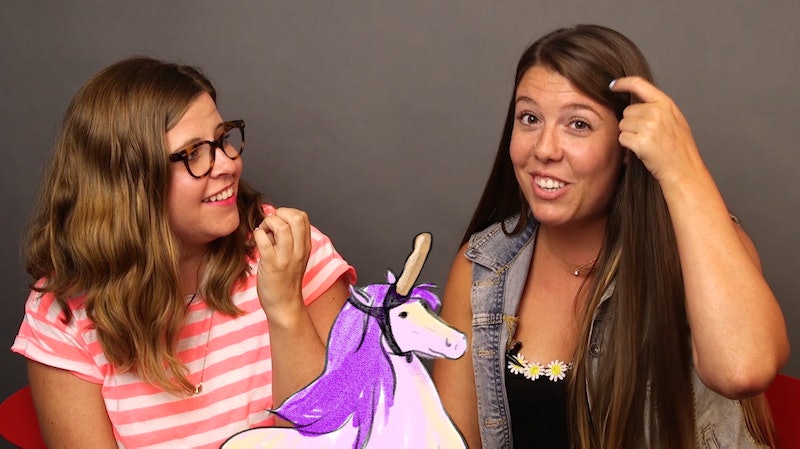 How good is your gay slang? Well, I assumed everyone picked up at least some gay slang through teenage viewings of The L Word, but it turns out not everyone was as obsessed with boob shots as I was. We made a video to find out if straight people know what different gay slang words really mean and it turns out that, on the whole, they do not. They emphatically do not. But the guesses are pretty incredible. (I mean, every group has a term for insects on your genitals, right?) I do feel for them though, sex terminology always varies between different groups of people and it can be hard to pick up on. Fun fact: in England "fanny" does not mean butt. It absolutely does not mean your bottom. I wouldn't say I learned that the hard way, but I would say I learned it the awkward, embarrassing, and hilarious way.

But this video can save you from some of that embarrassment. And it will give you the joy of watching some silly, imaginative stabs in the dark. Maybe you'll learn something — I was happy to discover that I am a unicorn! Well, depending on the... umm... horses involved.

Here are my favorite guesses:

Come on guys, it's a gay words quiz! Focus!

Best Guess: "Like all the people they had sex with could go in a U-Haul."

Couldn't the amount of people anyone's had sex with fit in a U-Haul?

Best Guess: "Does it have to do with pee?"

Another guess is the "the gayest of all gays," which I felt deserved honorable mention.

OK, I admit I did not know this one.

Best Guess: "Someone who only care about size."

We all knew this one.

I maintain that "giggling starfish" should be used across women of all orientations, but pillow princess works.

Best Guess: "Maybe two gals who are pals who also have sex with each other."

This has happened to me while I had my tongue in a girl's mouth.

Best Guess: "It's a somersault."

Hey, it could involve somersaults.

Best Guess: "Otters like to swim on their backs. Is it something to do with that?"

That drawing is too cute not to be included in this.