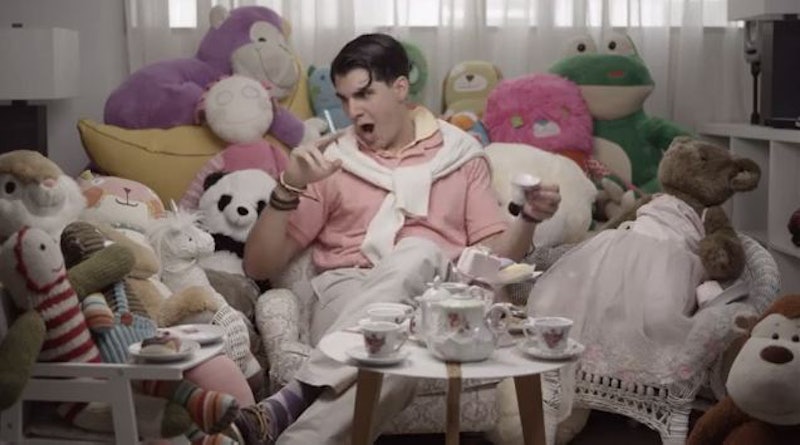 Obvious PSA: social smoking, hookah, and smoking flavored cigars all still constitute smoking. The Truth Initiative, which hopes to put an end to teen smoking and college smoking once and for all, has teamed up with Vine stars for a "Big Tobacco Be Like" video series. The series will show how smoking "only on the weekends" or when you're at a party doesn't do away with the harmful health effects that are associated with traditional cigarettes. Because when teens light up, even if it's just occasionally, big tobacco is still making money off of them as they increase the risk that they'll become addicted, regular customers.

Since the Truth Initiative's launch in 2000, teen smoking has dropped from 23 percent to 8 percent. But because of new products like hookah and flavored cigars, teens are picking up smoking again as an occasional habit, and half of teens who try cigarettes in college are still smoking four years later, according to the campaign. But Truth doesn't want to preach to teens about this fact. Instead, it's using Vine stars so it can show just how hilarious and absurd it is to say that social smoking is cool or more healthy because you don't do it everyday. In the initiative's "It's A Trap" video, which premiered at the MTV Video Music Awards and has more than four million views on YouTube, strange animals interject when college students say things like, I'm not a smoker because "I've never even bought my own pack."

Truth is going for a similar vibe in the "Big Tobacco Be Like" videos, which are part of the initiative's Finish It campaign and will debut during the Oct. 4 season finale of Fear The Walking Dead and the season premiere of The Walking Dead on Oct. 11. The videos will feature Vine stars Logan Paul, Christian DelGrosso, Allicattt, and Jerry Purpdrank, according to Truth.

Allicattt told Truth that through the funny videos, she hopes that teens won't buy into the idea that smoking "just once" isn't harmful:

I've seen firsthand the dangerous effects of tobacco ... and I know that a lot of young people still think smoking is a casual and harmless activity. I wish teens understood that even alternative and seemingly "harmless" forms of tobacco—like hookah or flavored cigars—are still bad for you. There are so many marketing ploys out there to make us believe that these are ok for us to consume, but in reality, it's still smoking, and all smoking is harmful.

DelGrosso is featured in the first segment, where he plays "that one homie" who says, "I never smoke alone. Only with the squad!"

Most of the time, "I'll quit when I graduate" just doesn't turn out to be true. Truth found that teens who smoked two cigarettes a week at the age of 12 are 174 times more likely to be heavy smokers as adults. These are the kinds of issues that "Big Tobacco Be Like" hopes to reveal, because — all jokes aside — a choice to "only smoke on the weekends" is still helping the tobacco industry thrive and hurting the smoker's health.