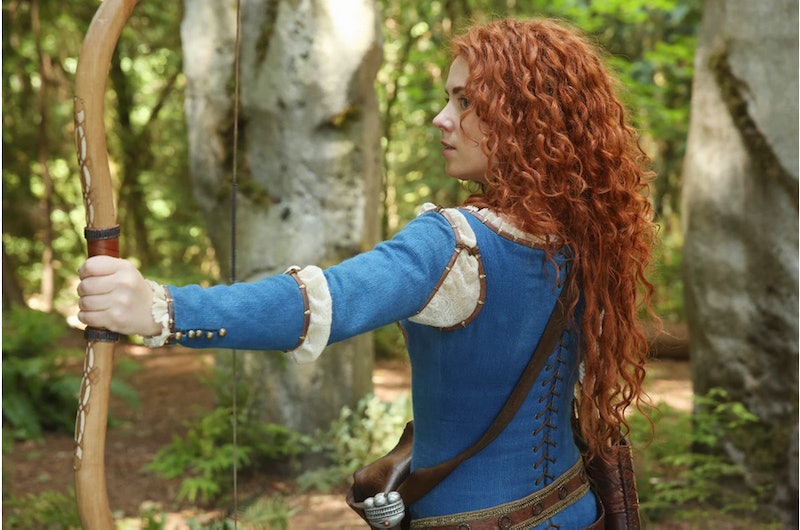 Once Upon A Time recently premiered its fifth season, introducing new characters and a new realm — Camelot. Just when you thought you’ve met all of the princesses from the ABC series’ Disney-based universe, we meet Merida from Pixar’s Brave. In this OUAT world, Merida is on a quest to save her brothers. But, what happened to Merida's brothers in Brave? Will their fate be the same on OUAT?

In Disney’s 2012 movie Brave, Merida introduces her redheaded triplet siblings as, “The princes. Hamish, Hubert, and Harris. Wee devils, more like. They get away with murder. I can never get away with anything.” The boys spend the film finding trouble and causing trouble, often as comedic relief.

However, in the ABC series, Merida is now queen and the rival clans aren’t happy about it. Merida tells Emma, “In my land, people, well men, don't think a woman can lead.” To which Emma replies, “Not just in your land.” Preach, sister. So, in an act of aggression, Merida’s brothers were kidnapped by a rival clan and she is on a journey to save them. And, there isn’t a lot of information from OUAT on what she will find at the end of her journey. On the Once Upon A Time wiki page for Merida, her family tree only lists “three brothers.” So, not a lot of details yet, but we hope these three boys are just as fun as their Pixar counterparts if we ever do meet them.

Since we’re seeing Merida a little older, more mature, and as queen on OUAT, the princes could have grown up a little too. But, first, here’s a refresher about Merida’s mischievous brothers in Brave.

Gives a new meaning to the term triple threat.

Talk about an exciting dinner conversation.

They Have Merida's Spunk

And an eye on the pies.

They Have A Sweet Tooth

Seriously, these boys are food motivated.

Which Sort Of Leads To The Whole Bear Thing

Yes, there's a bear thing. See, Merida received an enchanted cake that could change her fate, but her brothers ate it too and turned into bear cubs. (Don't worry, they eventually turned back.)

So, that's what happened in Brave. But, I guess we'll have to wait, watch, and see if Hamish, Hubert, and Harris make an appearance on Once Upon A Time to find out what exactly happened to them in this new world.