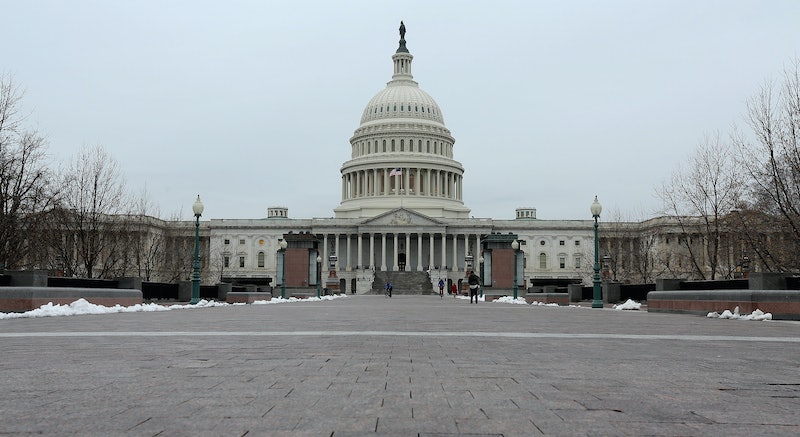 The oft-forgotten Hyde Amendment, which prevents federal money from funding abortions, is 39 years old today. The anti-abortion legislation restricts low-income women's access to abortion by preventing Medicaid from covering the procedure. Since the amendment was passed, more federal laws have followed in its footsteps. Of the four reproductive rights laws passed since the Hyde Amendment, only one protects women's rights.

Originally passed by the House of Representatives on Sept. 30, 1976, the Hyde Amendment isn't a permanent bill, but is rather attached to appropriations bills each year to set what the Department of Health and Human Services' funds can and can't be used for. The initial version banned the use of federal money for any abortions, but President Bill Clinton signed a 1993 appropriations bill that created exemptions for cases of rape, incest, and danger to a mother's life. These exemptions have lasted through 2015.

Although the amendment, which mostly affects Medicaid, was passed in 1976 (just three years after the landmark Roe v. Wade case), it didn't actually take effect until 1980, when the Supreme Court ruled that it was constitutional. The court wrote in its decision that the government can legally distinguish between abortion and "other medical procedures, because no other procedure involves the purposeful termination of a potential life."

Abortion restrictions are usually dictated by individual states, but there have been a few other federal laws related to reproductive rights since 1976.

At the turn of the millennium, Congress's reproduction-related laws became much more Hyde-esque. The Born-Alive Infants Protection Act, signed by President George W. Bush in 2002, created legal protections for babies born after failed abortion attempts. The law defines "born alive" as "the complete expulsion or extraction from his or her mother" of an infant who "breathes or has a beating heart, pulsation of the umbilical cord, or definite movement of voluntary muscles." Since it's been proven that a doctor delivering and then killing a living fetus doesn't happen often — if ever — the law fuels anti-choice rhetoric that abortions are gruesome and morally wrong.

In 2003, President Bush also signed the Partial-Birth Abortion Ban, which prohibits the intact dilation and extraction method of abortion (referred to as "partial-birth abortion" in the law) once used for second-trimester abortions. The Supreme Court upheld the law's constitutionality in 2007, but Justice Ruth Bader Ginsburg's dissent noted: "The safety advantages of [dilation and extraction] are marked for women with certain medical conditions, for example, uterine scarring, bleeding disorders, heart disease, or compromised immune systems." The Partial-Birth Abortion Ban not only limited doctor's options for performing abortion, but also set a dangerous precedent for states to impose other restrictive abortion laws, which they've done vigorously.

The Unborn Victims Of Violence Act

The Unborn Victims of Violence Act, signed also in 2004 by Bush, recognizes a fetus as a legal victim if it is injured or killed in certain violent crimes, such as murder. Although the law specifically says it does not apply to abortions, pro-abortion groups, including NARAL, Planned Parenthood, and the ACLU, strongly opposed the language used, as it gets alarmingly close to granting fetuses personhood — which would make it legally possible to completely outlaw abortion.