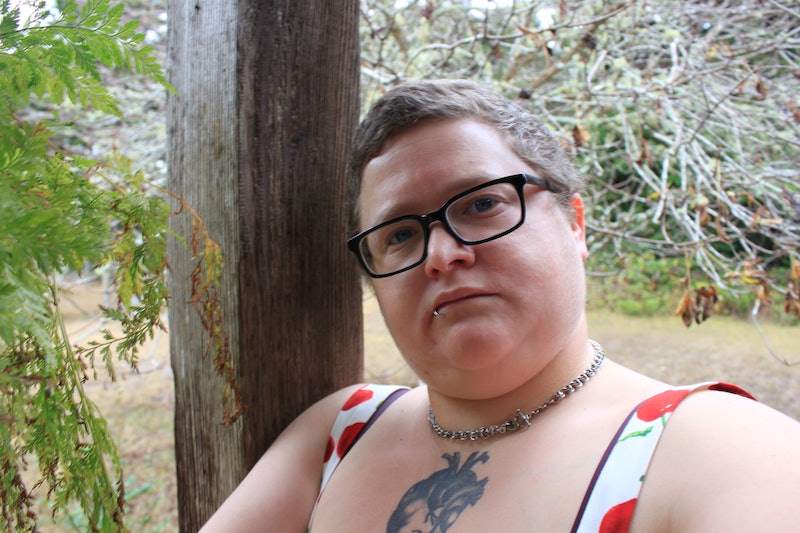 I was always terrified of growing breasts. When I saw them showing up on the girls around me, popping up like mushrooms one by one, I knew I was doomed — and I spent the next 17 years in a constant war with one of my most-hated body parts, living with constant dysphoria, avoiding myself in the mirror. These, I thought, can't possibly belong to me. Well, they did, but they won't for much longer: On November 3, I'm going under the knife for a subtotal mastectomy ("top surgery") to have them hacked off. Deboobulation, as it turns out, is quite costly, which is why I ended up swallowing my pride and turning to the Internet with an Indiegogo fundraiser. My "ta-ta to the tatas" effort is conflicting with my class anxieties in all kinds of ways, and it's teaching me a lot about myself.

I was raised in poverty — in fact, when I filed my FAFSA, they were so convinced that we were misstating my father's $7,000 annual income that they repeatedly called us and harassed him for verification. I've been working since I was 11 in various settings, and when I went to college at 15, I was effectively showered in money thanks to how poor I was — a novelty on the expensive, well-groomed environs of an East Coast liberal arts school. I have a vivid memory of walking up the green with a friend to pick up my semester's Poor People Money from the bursar's office, while he was bringing his tuition check.

The thing about being raised in poverty in the United States is that you are repeatedly bombarded with the bootstrapping mentality that if you work hard enough, and try hard enough, you'll be able to pull yourself tooth and nail through the lower classes and up into the aspirational life — a nice home to call your own with a picket fence, 2.5 children, a dog. Running water, floors that don't abruptly give way under your feet, roofs that don't blow off in the winter.

I could see firsthand that there were some significant holes in the American Dream.

It's why I fought so viciously and determinedly to go to college. I was privileged enough to end up in a school district where college was a foregone conclusion for most students, and where despite our financial straits at home, I had access to a good library, classes at the local junior college and waived fees for field trips. Going over to friends' houses was a bizarre exercise in surreality for me, and vice versa. I couldn't believe people actually lived like that; but people seemed equally taken aback when they entered through our side door, which was so far out of plumb that you had to yank it both up and out to get it open, and then had to sidestep the nasturtiums that were, despite our best efforts, growing in through the power outlets.

I could see firsthand that there were some significant holes in the American Dream — my father, a Navy brat who'd traveled the world as a child, had a BA from the University of Chicago and an MA from the University of Oregon, but was still tending bar in a small logging town. I grew up at the end of that bar, occasionally dipping behind to mix Shirley Temples, startling the out-of-towners when I tottered out with my bright red drinks. He was one of the first in his family to go to college, like you're supposed to if you want to succeed, and look where it got him.

I never felt poor or deprived as a child — my father went to great lengths to make sure that I had adequate food and clothing, and his education provided me with certain middle class privileges that weren't available to the handful of other poor kids in our school. We listened to NPR while we cooked meals at home, attended the music festival every year in exchange for editing its program, danced to jazz on long winter nights. I had free run of a collection of books ranging from Catullus to Cormac McCarthy, and my father's moderate acclaim as a poet meant that I knew my way around a sonnet.

But my body still betrayed me in the end.

Every transgender person has a different growing up story. There's never a single instant you realize that you're different from the other kids. It's more of a slow-blooming understanding that something has gone terribly sideways. Kids today, exposed to a culture in which transness plays an increasingly public role, have a better sense of their gender much earlier in life. I didn't even know that transness was a thing until I went to college, happened to glance at a friend's driver's license and saw an "F" where an "M" should have been.

As soon as we set a surgery date, I started lying up awake at night with anxiety — not over the surgery itself, but over the cost.

I was young and innocent, unaware that asking people intrusive questions about their gender wasn't really appropriate, and I remember spending a long afternoon on the lawn with him while he patiently explained his relationship with gender. I suddenly understood a lot of things about my own discomfort with myself. And I also learned a great deal about the costs — not just emotional and social, but economic — of transition. He showed me his binder, which he wore because he couldn't afford the roughly $6,000-$8,000 (in today's money) for top surgery, let alone tens of thousands for bottom surgery (a variety of procedures are used depending on the patient's preferences, available tissue to work with, the surgeon's training, and other factors). Like many transgender people, he used sex work to pay for hormones and other basic treatment, but it likely wouldn't be enough for gender confirmation surgeries.

A kid on a poor people scholarship definitely wouldn't be getting a dick, was what I took away from that conversation.

Like most low-income Americans, I was uninsured as a child and I remained that way through much of my 20s, only acquiring insurance when Obamacare opened up more options for me — and when my freelance income became stable enough to actually pay for those options. I may struggle to meet the premium on my Platinum coverage every month, but it means that a lot of health care that wasn't imaginable before is now available to me, which is why I was able to start transitioning this year, starting T in May and now, in just under five weeks (not that I'm counting) finally freeing myself of my hated breasts.

As soon as we set a surgery date, I started lying up awake at night with anxiety — not over the surgery itself, but over the cost. The co-pays, the time I'd need off work (because most freelancers don't have enough money in savings to even begin to manage a few weeks, alone close to a month, without working). The pile of debt bubbling quietly away behind me, the IRS sending me increasingly stern notices every month. ("Debbie" from the IRS was quite nice when I talked to her the other day, though.)

"You should have a fundraiser," friends said, and I recoiled. To ask for money went against everything I grew up with in this country — we don't deserve things, we're supposed to earn them. I can't go around, cap in hand, begging strangers for cash. It would come dangerously close to admitting defeat, saying that I'd failed both as an adult and as an American. It touched upon the live wire of my class anxieties, living as I do with the constant sensation of being a pretender in a world of people who, by and large, didn't grow up in the same conditions I did, and didn't have the same anxieties about gradually taking on the trappings of middle class life.

I agonized over it for weeks, going back and forth on the subject, talking with friends, including those who had grown up like me, those who remembered handwriting essays through high school because their families didn't have computers, who recalled staying on campus over Thanksgiving after they'd clawed their way into college because they couldn't afford to go home. I work, and live, in a supportive community, one in which social justice is paramount, and I see fundraisers all the time for a variety of things — for trans people like me who need help affording care, for funerals, for assistance moving out of abusive living situations, for unexpected health care costs.

A part of me has always viewed those people as brave for being willing to expose their vulnerabilities by asking for financial assistance; I wondered how they managed to work up the courage. I never scorned them, so I asked myself why I was so unwilling to ask for help.

We do all pull together — maybe not the one percent, or even the 10 percent, but the rest of us realize we're trapped in a terrible system and that the only way out of it is to help each other out.

I must have started and stopped working on a write-up for my Indiegogo account a dozen times before I finally saved it, but didn't make it go live. Every time I thought about it, my mouth would go dry and I'd think better of it, closing the tab, going for a walk, anything to avoid looking at it or thinking about it.

Finally, last week, I published it, terrified of the results — of my admission that I needed money, of having the audacity to ask the community for help, of who would see and judge me or mock me. What happened startled me: Despite my anxieties, donations large and small started appearing. Within 24 hours, I'd raised $500. A week later, I'd raised $1,300 — not nearly enough, but a huge step in the right direction. People had retweeted me and signalboosted me across the Internet, and while I recognized many of my donors, some were complete strangers. The kindness of the Internet gave me a strange sort of faith in an environment that's often extremely toxic and vitriolic, but it also served as a stark slap in the face to bootstrapping attitudes and the way our culture looks at class and money. We already know that the bootstrapping myth is a sociocultural conspiracy designed to oppress the working classes, but it can still be surprisingly hard to break free from it.

We do all pull together — maybe not the one percent, or even the 10 percent, but the rest of us realize we're trapped in a terrible system and that the only way out of it is to help each other out. I still firmly believe that relying on charity is not an effective way to provide comprehensive social services and a strong safety net, but this experience has oddly given me confidence in myself, and it makes me wish I could tell others in the same situation that, hey, it's OK to ask for help. Accepting a hand to get out of the mud doesn't mean you've failed at life.