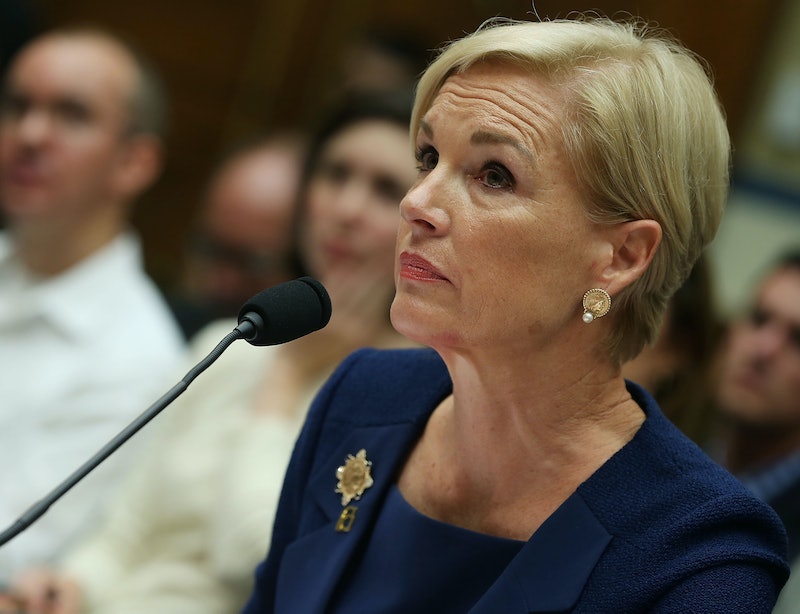 In their continued mission to strip Planned Parenthood of federal funding, Republicans called for the nonprofit's president to testify at a congressional hearing Tuesday. However, the whole ordeal was more reminiscent of a witch hunt than an official hearing. Speaking in front of the House Oversight and Government Reform Committee, Cecile Richards was interrupted repeatedly by Republicans' questioning, or in the words of Planned Parenthood's Senior Vice President Dawn Laguens, "haranguing." Rather than allowing Richards to provide comprehensive answers regarding allegations that the women's health organization harvests fetal organs for profit, the committee spoke over her and bombarded her with more questions before she had the chance to respond. Just how many times did they interrupt Richards? Forty-four.Richards' testimony comes after the Center for Medical Progress released a series of heavily-edited smear videos which suggested Planned Parenthood sold fetal parts for profit, an allegation the organization has vehemently denied. As part of its investigation, the House Oversight and Government Reform Committee brought in Richards to testify. She attempted to focus on the number of women who rely on Planned Parenthood for health services, which include preventative screenings, STD testing, and family planning. I say "attempted to focus" because nearly every time Richards tried to speak, she was rudely cut off by a Republican committee member.

Throughout the hearing, Richards struggled to get a word in edgewise. Not only is it incredibly counterproductive to hold a congressional hearing to obtain someone's testimony and then not hear that testimony, but it's also ultimately incredibly irresponsible and even dangerous for America's women.

In its little show of dominance, the committee missed the most important point that Richards tried in vain to get across: Millions of people, including men, rely on Planned Parenthood for their healthcare. Prior to her testimony, Richards penned an article for The Huffington Post in which she outlined what she hoped to convey to the committee. Since she was so rudely shut down at the hearing, here are the big takeaways you should know.