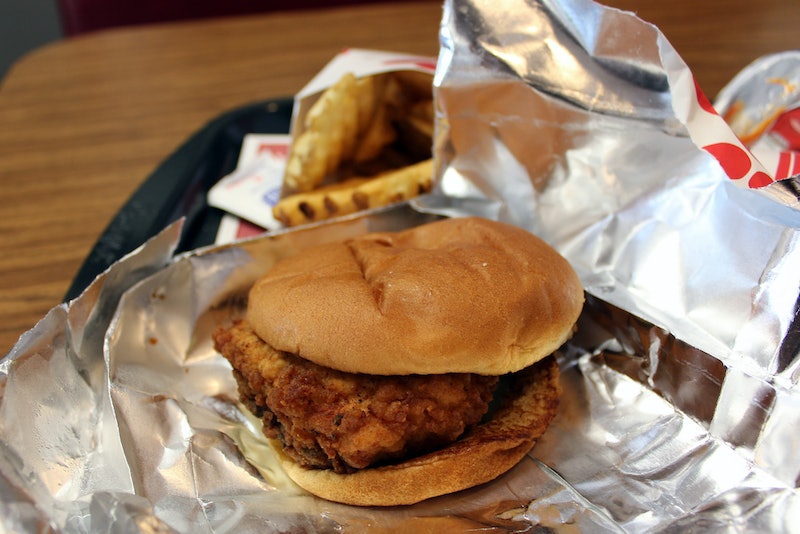 Hear ye, hear ye — I have an announcement of delicious proportions to make. Chick-fil-A will finally open its first full-service restaurant in New York City on Oct. 3, and you can win free Chick-fil-A for a year just for showing up to the grand opening. What's that? What do you mean, what's the catch? Fine, there's totally a catch. I mean, c'mon. You can't expect a purveyor of such culinary delights as Chick-n-Strips and the ambrosial nectar known as Polynesian sauce to go handing out the good stuff willy nilly, can you?

But first, a few details about the new digs. Designed to cater to the busy lifestyle of Manhattanites, the restaurant — which is situated at the corner of West 37th Street and 6th Avenue — will offer expediting ordering via iPads. Although, let's be real: Those Chick-fil-A people are ninjas of briskness any way you slice it.

In order to take part in the restaurant's grand opening promotion, you must be one of the first 100 adults in line at the three-story, 5,000 square-foot venue (the largest of its kind in the country, no less). Easy enough, right? Erm, easy enough-ish. Let's have a look-see at some of the rules, regulations and impending natural disasters standing between you and 365 days of living the life filled with chicken and waffle fries we all know you deserve.

Alas, don't think bringing your super cute kids along for the ride will net you a few extra entries. To be eligible for this tasty promotion, you must be 18 or over and be ready to present a valid U.S. Government-issued ID that says so when those hallowed doors open. Hey, I don't make the rules.

2. You Must Be Committed

This isn't a contest for the fair-weather consumer. Dubbed the First 100 event, the shenanigans officially kick off at 6 p.m. on Friday, Oct. 2. Never mind the flash flood warnings and torrential rain being called for! What's getting soaked, really, when a year's worth of weekly Chick-fil-A #1 Meals dripping in Polynesian Sauce glory are on the line? On the plus side, the restaurant provides camping chairs, blankets, two meals and overnight activities to the First 100 participants.

3. You Must Have the Right Zip Code

Sorry, out-of-towners! There'll be no roadtripping it into town and trying to pull cutsies with the locals in line (there goes my weekend). Since the event is aimed at building a customer base among the residents who frequent the area, you'll need to prove you live in an eligible zip code — you can find out if your borough makes the cut here.

4. You Must Be Lucky

If precisely 100 people show up to herald the grand opening of Chick-fil-A's NYC location, you're in, my friend. You just scored yourself 52 free Chick-fil-A sandwich meals. Alas, you aren't the only person in the world who loves chicken and lives by the mantra "Free is me." So, in the likely event that more than 100 people show up when the line officially forms, up to the first 300 people will be registered in the drawing. Chick-fil-A will then select 100 finalists to participate in the special First 100 event. Those 100 lucky souls will score a digital offer card loaded with the one-year supply of free chicken goodness.

While it's true that Chick-fil-A has previously come under fire for donating to anti-LGBT organizations, the company has since severed those ties. Also, check out Chicken Offsets — this nifty site allows for guilt-free noshing, knowing you're donating a dollar to equality promoting non-profits every time you actually pay for a Chick-fil-A meal. In any case, here's hoping, "Winner, winner, chicken dinner" soon has a whole new meaning for you.