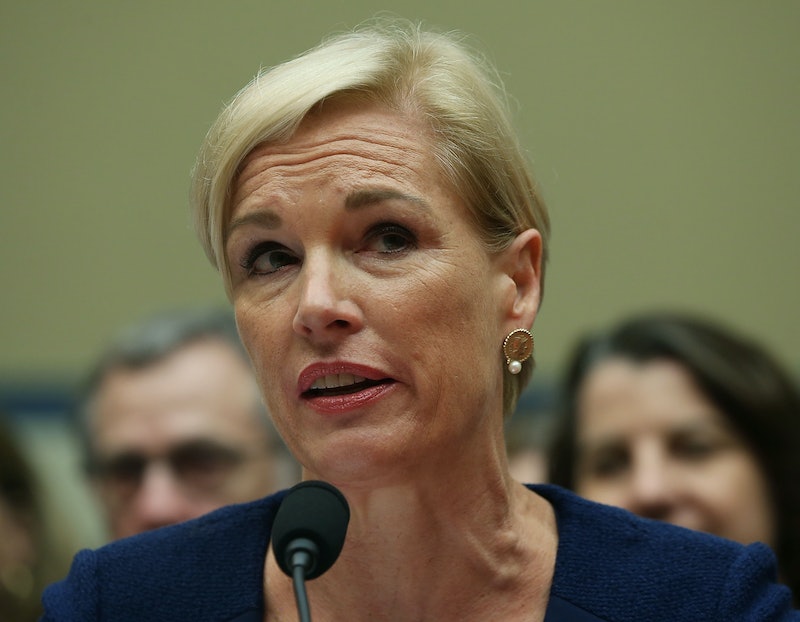 Planned Parenthood has to deal with a lot of insane questions and accusatory comments on a daily basis, and President Cecile Richards was finally able to defend her organization before Congress against allegations that its clinics illegally sell fetal tissue for profit. Richards was grilled by House Republicans for more than four hours in a congressional hearing Tuesday, telling Congress that the doctored hidden-camera videos of her staff were part of a "smear campaign," and that she's proud of Planned Parenthood's work supporting fetal tissue research. The congressional hearing wasn't the first time Richards and the sexual health organization have fielded absurd criticisms, and they often have perfect responses to the crazies.

As a nonprofit that's caught in the middle of a conservative war against women's reproductive rights, Planned Parenthood has experience defending its health services, its use of funds, and people's right to sexual healthcare. Planned Parenthood receives $450 million from the government every year — which legally can't be used for abortions except in cases of rape, incest, or danger to the mother's life — most of which is reimbursements for services covered by Medicaid. However, Richards spent much of the hearing Tuesday explaining why the organization needs federal funding to provide care to low-income women across the country.

Richards' responses to unnecessary questions during the hearing were just more examples of the nonprofit's ability to stand up for itself and women everywhere. Here are six perfect responses from Planned Parenthood to crazy accusations, questions, and comments.

During the hearing Tuesday, Representative Jason Chaffetz showed a chart that claimed abortions performed at Planned Parenthood had drastically increased, while breast exams had decreased, which Vox proved was misleading. Richards said: "You created this slide. I have no idea what it is." After Chaffetz said the numbers came "directly out of your corporate reports," Richards responded:

My lawyers have informed me that the source of this is Americans United for Life, which is an anti-abortion group, so I would check your source.

In five hours of badgering and haranguing, Committee leadership only managed to show how little they know about women, women’s health, or the government health care programs they oversee.

On The Hidden-Camera Videos

After the heavily edited hidden-camera videos purporting that Planned Parenthood profits from selling fetal tissue for research emerged, the president wrote a powerful op-ed in The Washington Post that said:

The extremists will not win this battle. The goal of these attacks is to get Planned Parenthood to stop providing care — and that will never happen. We have proudly provided reproductive health-care services for 99 years, and we are only getting started.

In 2013, Congress held hearings about whether or not women needed access to birth control in response to the Affordable Care Act's birth control benefits, and Richards wrote an op-ed for the Huffington Post that put anti-birth-control politicians in their place. She wrote:

Women's preventive care — including birth control — is basic health care. This shouldn't be a revolutionary idea, but unfortunately it is to some.

These relentless attacks continue after voters — both men and women — spoke loud and clear in the election, saying that they do not want politicians to interfere in women's personal health care decisions, one year after the memorable (and viral) image of the all-male birth control hearing and two years after the Tea Party leadership in the House tried to eliminate critical federal funding for Planned Parenthood health centers and take away preventive health care from millions of women — including birth control information and services.

Multiple new abortion and family planning restrictions threatened Texas clinics and women's access to reproductive health services in the state in 2013. The Center for Reproductive Rights filed a request for the Supreme Court to reevaluate a lower court's ruling that the restrictions are constitutional, and the Court has temporarily blocked some of the restrictions. Planned Parenthood has used Texas as an example of what will happen to the country if Republicans successfully limit women's reproductive rights. In an online statement, Richards said:

What does America look like without access to safe, legal abortion? Just look at Texas, if these laws are allowed to go into effect. It’s a world where, even though it’s legal, and even if the pregnancy puts her life at risk, or is the result of rape or incest, a woman has to drive hundreds of miles to access an abortion — very often taking time off of work and paying hundreds, if not thousands, of dollars out of her own pocket. These laws de-facto eliminate abortion in most of the state, making it unobtainable for too many women, and quite literally putting women’s lives at risk. If the Supreme Court allows these sham laws to stand, that wouldn’t just be the fate of women in Texas — it could be the fate of women across America.

After Fiorina described a gruesome scene which she claimed was in one of the hidden-camera videos in the last GOP debate, Planned Parenthood Vice President for Communications Eric Ferrero said in a statement:

There is no polite way to say this: Carly Fiorina is lying. There is no video showing anything like what she claims. It's just totally false, no matter how many times she repeats it.