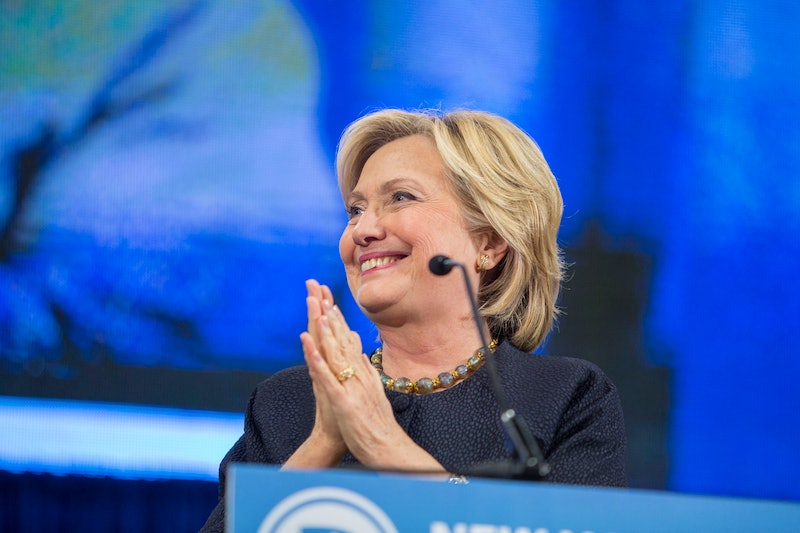 Thus far, the constant onslaught of former Secretary of State Hillary Clinton's emails have been more amusing than damning. But one recently released email shows Clinton's hesitation to use gender-neutral language on State Department passport forms. The email in question, from 2011, is in regard to the State Department's decision to stop using the terms "mother" and "father" on forms, and instead use "parent 1" and "parent 2." It was an inclusive, LGBT-friendly decision — and one that Clinton apparently didn't know about.

“Who made the decision that State will no longer use the term ‘mother and father,’ and instead substitute ‘parent one and two’?” Clinton asked in an email referencing a Washington Post article on the topic. “I’m not defending that decision, which I disagree w and knew nothing about, in front of this Congress.”

Clinton went on to explain her reasons for disagreeing with the decision. "I could live w letting people in nontraditional families choose another descriptor so long as we retained the presumption of mother and father. We need to address this today or we will be facing a huge Fox-generated media storm led by Palin et al." An email sent to Clinton the next day contained an Associated Press story stating that Clinton had requested that "mother" and "father" remained on the form, and simply added additional options.

The insinuations of this email do not look good for Clinton, who has made marriage equality a cornerstone of her campaign. Over the summer, the day that the Supreme Court announced that same-sex marriage was legal in all 50 states, Clinton's campaign decked out the H logo in rainbows. She has repeatedly appealed to LGBT voters, and positioned herself as the candidate for equality. In Clinton's campaign store, supporters can even purchase a "pride pack," which features rainbow-decorated H stickers, buttons, and a t-shirt saying, "gay rights are human rights, and human rights are gay rights."

But at the time of the email, Clinton was nowhere close to being the equality candidate. At the time, Clinton was against same-sex marriage, instead favoring civil unions, like many Democrats. During her first presidential campaign in 2007, Clinton said on a Human Rights Campaign questionnaire, "The question of marriage is one that historically has been left to the states. I opposed the so-called “Family Marriage Amendment” because this issue has no place in the Constitution."

In fact, it wasn't until 2013, two years after the damning email, that Clinton publicly changed her tune, announcing her support for marriage equality. Her statement came a year after President Obama formally endorsed marriage rights. In a video with the Human Rights Campaign, Clinton officially announced her support:

LGBT Americans are our colleagues, our teachers, our soldiers, our friends, our loved ones. And they are full and equal citizens, and they deserve the rights of citizenship. That includes marriage. That’s why I support marriage for lesbian and gay couples. I support it personally and as a matter of policy and law, embedded in a broader effort to advance equality and opportunity for LGBT Americans and all Americans.

It is quite possible that the email in question does not necessarily reflect Clinton's own concerns, but rather her reticence to deal with conservative backlash. Or maybe her views have truly evolved. But Clinton has already grappled with questions about why it took her so long to be in favor of marriage equality. Young voters and LGBT supporters who are unconcerned with Clinton's emails may be able to look past her constant communication with Sidney Blumenthal or find her technology problems humorous. But this reaction to gender-neutral language may be incredibly damaging to Clinton's youth voting bloc, and may signal danger down the line.