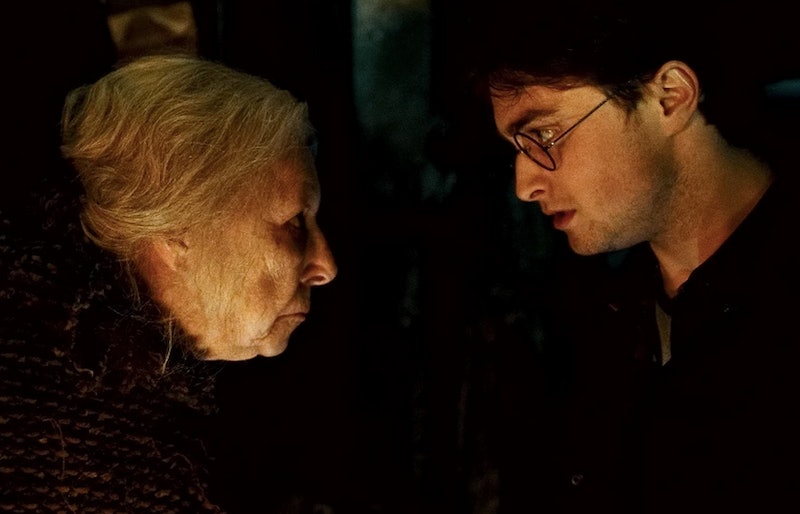 As Halloween crawls nearer, the weather becomes crisp and cold, the nights get dark earlier, and it becomes the perfect time to curl up with a truly creepy book. Maybe your first choice would be a thriller in the vein of Gone Girl, or a tried and true horror classic, or maybe a psychological book that will keep you awake at all hours of the night. There are plenty of wonderfully creepy books to choose from, but sometimes the creepiest scenes in books are actually hiding in your favorite series… and you don’t even realize it.

Yes, I’m talking about Harry Potter. Although most of us associate the series with happiness (because obviously), there were actually some pretty creepy moments in the books. You might be thinking, “Well, only in the later books…,” but I’m NOT just referring to books 4 through 7. As anyone who’s read through all seven books in the series knows, the tale of the chosen one certainly gets darker as you read, which allowed a lot of us to grow up with the characters. But there were also some pretty dark moments from the get-go. After all, you can’t have a classic good-versus-evil tale… without a little bit of evil.

When Voldemort Drinks The Unicorn's Blood

This. Scene. Was. Terrifying. Not only was a unicorn, the most innocent creature ever, slain — Voldemort was THERE, in the forest, DRINKING ITS BLOOD. Actually, the fact that Harry was sentenced to serve detention in the Forbidden Forest in the first place is pretty creepy. Who sends 11-year-olds into a forest that's supposed to be off limits to students, and happens to be crawling with the DARK LORD?

When Voldemort's Head Was On The Back Of Quirrell's Head

Harry had to deal with a lot for an 11-year-old, including going face-to-face-to-face with both Voldemort AND a crazy professor who let someone attach their head to the back of his. Talk about disturbing.

He's a giant spider, and he tries to eat Ron and Harry, despite the fact that Hagrid specifically asked him not to. Gross, AND creepy.

When Ginny Can't Remember Where She's Been

Harry has to go through a lot in his journey to defeat Voldemort, but don't forget: Ginny was actually possessed by Tom Riddle when she was only 11 years old, and couldn't remember what she'd been doing for large chunks of time. What is it about being 11 at Hogwarts? In Muggle schools you do normal things like math and writing papers about what you did over summer break. Apparently in wizarding schools you try to find out what demonic being has been murdering unicorns, or you become possessed by that being.

When Sirius Stands Over Ron With A Knife

Remember when we didn't know that Sirius was actually good? He broke into Gryffindor tower (using a list of passwords Neville lost) and stood over Ron's bed with a knife. Before we knew that he was just looking for Scabbers, this scene was incredibly terrifying.

Trelawney seems bumbling, but she actually predicts that Voldemort will rise again in an incredibly disturbing moment which Harry witnesses.

The fourth book pretty much divides the series between dark, and SUPER SUPER dark. From the opening scene with poor Frank Bryce's murder, to Wormtail chopping off his arm and taking blood from Harry to resurrect you-know-who, the whole thing is totally disturbing. Especially the arm part. As a kid reading the book, that part sent shivers down my spine, and it still does to this day.

When Barty Crouch Jr. Confesses Everything

Barty Crouch Jr.'s whole story is not only depressing, it's downright creepy. He poses as Mad-Eye Moody, which is already scary, but when he's forced to drink Veritaserum after being caught, his monotone confession is probably the creepiest part: he's so evil that he feels no remorse for the horrible acts he's committed.

Skeletal horses that you can only see if you've witnessed someone die? Creepy.

The creepiest part about this encounter is that Harry sees everything through Nagini's eyes: he feels as if he's responsible for the attack on Arthur Weasley, but also feels powerless to stop it. Scary stuff.

The Department Of Mysteries

I think the weirdest part of this department was when the death eater got his head trapped in a jar and it kept morphing from a baby into an adult. The Department of Mysteries is a mysterious (obviously) and incredibly creepy place.

As Snape says in Harry Potter and the Half-Blood Prince: “The Inferius is a corpse that has been reanimated by a Dark wizard’s spells. It is not alive, it is merely used like a puppet to do the wizard's bidding." Um, terrifying much? As someone who HATES zombies, the scene when 1) Dumbledore has to drink a horrible potion and relive awful memories, and 2) Inferi crawl out of the water and attack him and Harry, was probably, to me, the creepiest scene in the series.

Hearing Hermione's screams as Bellatrix tortures her is torture in and of itself.

When Nagini hides in Bathilda Bagshot's corpse and then attacks Harry and Hermione, it's one of the creepiest and most terrifying scenes of the series.

According to J.K. Rowling, the process of creating a Horcrux is so disgusting that her editor wanted to throw up after hearing about it. This, combined with all the disturbing flashbacks as Voldemort decides which objects will be his horcruxes (in addition to the disturbing scenes of his ancestors, the Gaunts), makes the whole concept incredibly creepy. Seems fitting that the darkest character should have the darkest plot line.