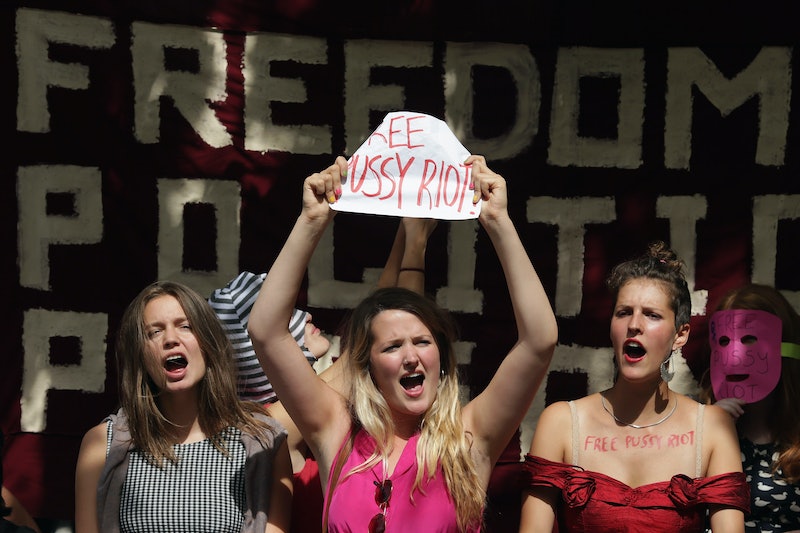 On Friday morning, two members of Pussy Riot held their first news conference since being released from prison. Maria Alyokhina, 25, and Nadezhda Tolokonnikova, 24, who were released two months early on amnesty Monday, met with reporters at Dozhd television headquarters, which, coincidently, is located close to the Cathedral of Christ the Savior, the site of their now-famous protest. (In March, the band was booked for "hooliganism" following an obscenity-filled song protesting the political connection between Russian President Vladimir Putin's policies and the Orthodox church.) During the conference, the women continued to speak out against Putin and voice their support for a chance in leadership. The third member, Yekaterina Samutsevich, who was freed on probation last year, was not present.

Tolokonnikov voiced her support for Mikhail Khodorkovsky, a billionaire and government critic imprisoned for a decade on charges of tax evasion after backing Putin's rival political parties, as president instead. Earlier, the women had written Khodorkovsky an open letter asking for his moral support for their activism — not, as they clarified, his financial help to sponsor it.

“There’s no talk of financial support. But he is important to us as a strong person, an incredible human being put through a more severe prison experience than we had,” Tolokonnikova said.

Khodorkovsky was the first benefactor of Putin's amnesty pardon — a sweeping grant of freedom that, when seen alongside the release of Pussy Riot members and the Arctic 30 Greenpeace activists, is considered by many in the international community to be a PR move by Russia, who don't have the best human rights track record when it comes to free speech.

“I think this is an attempt to improve the image of the current government, a little, before the Sochi Olympics — particularly for the Western Europeans,” Alyokhina said after her release Monday, adding she would have preferred to finish out her sentence. “But I don’t consider this humane or merciful.”

It likely won't be the last time the world hears from the activists: “The only thing they have acquired over their two years in prison is their confidence to continue fighting Putin’s regime even harder, because, well, this is the only thing that can change things in our country,” Tolokonnikova’s husband said on Monday.