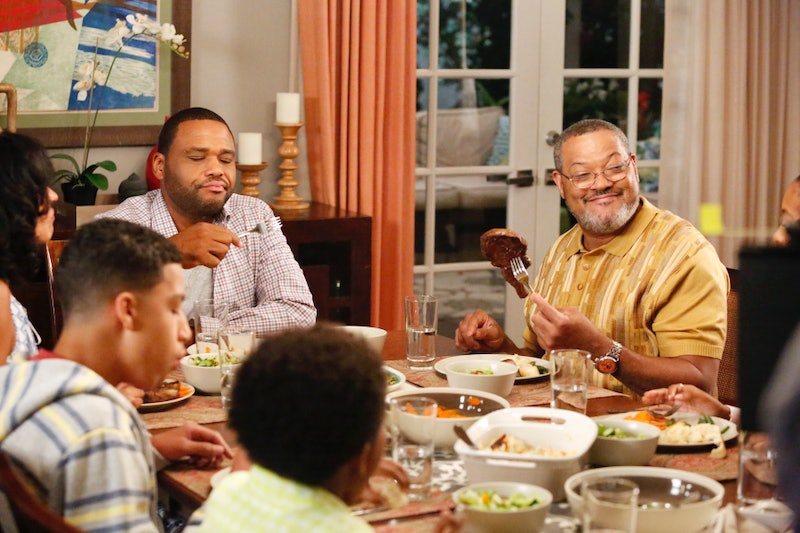 Adding to the list of political topics that the half-hour ABC comedy has been surprisingly willing to take on, the Johnsons buy a gun on black-ish after a skittish classmate's mom reveals that Dre & Bow have wildly different opinions about gun ownership. I found this episode a little lackluster, to be honest. They have four kids, and for some reason three of them are passionate about gun usage. I don't know why these kids are so passionate about gun ownership in anything more than an abstract way — for example, Dre's story about having guns associated with protection in his mind based on how he grew up makes perfect sense, as does hippie Bow's complete aversion to the idea. I get that the kids need to be enthusiastic about being safe in order to drive the conflict of the episode, but it struck me as odd that these upper middle class kids would have an intimate knowledge of guns as home-invasion protectors.

Also a bit disappointing were the two pop culture parodies that were halfway shoved into the episode. First, the twins doing their take on Home Alone was barely there, and really ineffective save for Pops' reaction to being Kevin'd by the paint cans. And I'm not sure why they would go the full corniness of having Pops train Zoe in martial arts and then do a Karate Kid parody instead of a Matrix joke. I get it, it's not original, but sometimes the easy joke is so obvious, doing an equally easy but less resonant joke is just distracting. Especially when later they then talk about the Karate Kid.

Sometimes I feel like black-ish really draws a line between its attempts at hard jokes, like the kid plots, which could improve, and its social-political commentary, which I continue to find ambitious and entertaining, but not always that bold, if that makes sense. Dre's office is a chance for him to crowdsource his opinion, and his coworkers provide all the salient expertise that, say, the comments on an article about Donald Trump would offer. There are plenty of stats about how rarely gun ownership results in increased safety during a break in, which Bow thankfully points out, so thankfully Dre does have a moment of consideration where he thinks about the wiseness of his decision, but one of the things I did like about this was how emotional and irrational Dre's choice to buy a gun was.

I think the most daring part of this episode is that it lets Pops win — which emotionally makes sense, who doesn't think of Fishburne as the MVP of this cast? — even though the nominal gun control in the home movement that exists feels largely driven by younger people, not older ones. And the show doesn't totally have Dre back down, either. He does agree to keep the gun, just to personally take on the work of learning how to use it, which the state/government does not require and barely even encourages. It doesn't end on a didactic note, and does point out how responsible gun ownership is way more on the owner than it is on the person selling the gun. However, it just barely inches over to funny enough territory to make this a satisfying sitcom episode.