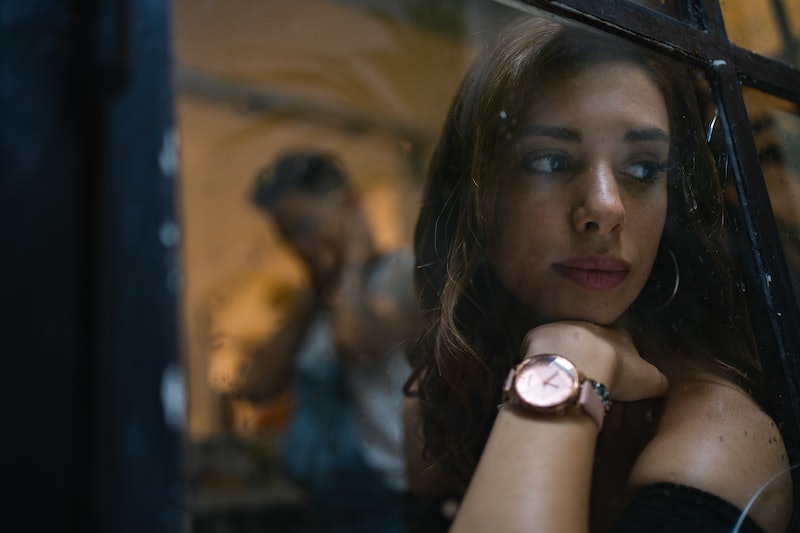 Think of the word "disability". What do you see? The people of the Special Olympics, swimming and running and jumping in wheelchairs or without limbs? Guide dogs? Stephen Hawking? People rudely using disabled parking spots without actually "looking" disabled? One thing that, unless you have personal experience with it, may not have immediately popped into your head is the phrase "invisible disability". But a huge range of disabilities currently recognized in today's medical community are completely invisible, even to the trained eye. It's time for us all to change our mental image of what being disabled means.

A disability is literally speaking the opposite of an ability — but in real life, it's not always that simple. Chronic pain, for instance, may leave you capable some days and absolutely flattened on others; epilepsy, another disability classified as invisible, can create a seizure with no warning whatsoever. And many people with invisible disabilities will suffer as much from their problem's hidden nature as from its symptoms.

So it's time to bring general knowledge about invisible disabilities into the light. Here's what you need to know — so that if anybody decides to confide about their ID status (no, not One Direction) to you, you'll know how to avoid making an absolute idiot of yourself.

1. They Span A Huge Range Of Symptoms

"Invisible disability" really is a massively catch-all term for a huge range of things. According to the Americans with Disabilities Act of 1990 (ADA) an individual with a disability is a person who: "Has a physical or mental impairment that substantially limits one or more major life activities; has a record of such an impairment; or is regarded as having such an impairment." As you may have clocked, that can cover huge swathes of things, from severe chronic pain to mental illnesses to diabetes to hearing or sight loss to learning difficulties. Phew. Exhausted yet?

The one real distinguishing factor that separates these disabilities from others is that you can't tell they're there by looking at somebody. There's even an award given by the Invisible Disabilities Association of America called the "But You LOOK Good Award". Some invisible disabilities will become obvious once you come to know a person better, but many may remain completely hidden unless the person chooses to disclose their condition to you. And that leads to some problems — not least people giving them the stink-eye when they use disabled parking spots or bathrooms.

2. They're More Common Than You Think

Disability, both visible and invisible, is more widespread in the community than you may believe. The rarity of seeing a person in a wheelchair may have convinced you otherwise, but that's just skimming the surface. If you ask the Invisible Disabilities Association, they'll explain that 26 million Americans are estimated to have a severe disability, and that up to three-fourths of them don't use a cane or wheelchair to get around — which is our main signifier of disability.

Let's take a few better-known invisible disabilities for example. Eighty-seven people are diagnosed with epilepsy every day, and one in 50 will have epilepsy at some point in their lives. At least 9.3 percent of the entire American population suffers from diabetes. And a whopping 1.5 billion people worldwide are estimated to have chronic pain. This is not a small problem; the chances are pretty good that the next new person you meet will have an invisible disability of some kind or other.

This is the thing that may piss off sufferers more than anything else, aside from the problems of managing their disability. It's that they often look completely "normal," or at least don't fit our sense of "disability" as it's normally defined. We're prepared to categorize people without limbs or with severe, obvious difficulty in mobility as disabled, but when it comes to something like an insulin pump or severe depression, we balk. If they can walk to the store, surely they must be fine, right? Wrong.

4. Some Of Your Favorite Celebs Have One

Given their widespread nature, it's not unexpected that some of the most famous people on the planet have an invisible disability. Avril Lavigne's got the headlines most recently with her struggle with Lyme Disease, an infectious disease caused by a tick bite, including the revelation that it was misdiagnosed as chronic fatigue syndrome and depression (both also invisible disabilities) before a doctor hit the nail on the head. But she's not the only one.

Nick Cannon has lupus, Lil Wayne suffers from epilepsy — and even Morgan Freeman, in whose voice you are now reading this post, suffers from fibromyalgia, a little-known chronic pain condition. Even the brilliant and wealthy aren't immune.

Employment law definitely protects employees with every kind of disability, obvious or not — but it often doesn't work out that way. According to a report by NPR, the biggest proportion of complaints made to the Equal Employment Opportunity Commission between 2005 and 2010 were to do with invisible disabilities. Clearly the situation for people who look like they should be able to work like a non-disabled person, but can't, is not great.

Some people cope with this by simply not disclosing their condition to their work and workmates, even though, Psychology Today notes, that just creates an added psychological burden of secrecy — and the false impression that, if they can't do something, it's just because they're incompetent. Which is about 400 types of not great.

6. It May Take A While To Reach Diagnosis

As Avril Lavigne can testify, one of the most frustrating elements of invisible disability can be the lack of immediate, obvious diagnosis. It's listed as one of the most common challenges facing invisible disability sufferers, and a 2002 collection of studies revealed that many people with invisible disabilities go through the medical ringer for years, collecting diagnoses, medical bills, and no real closure at all. They may not realize anything is wrong or abnormal until their early adulthood — or later — and may struggle for years to be believed or find a capable physician. That has got to suck.

7. It's The Sufferer's Information To Disclose

Reading this, you may believe that your duty, if you're an able-bodied person, to reveal as much about a person's disability to your coworkers and friends as possible, to make sure they're clued up and aware of the laws. Good on you for being supportive! But that is seriously not your job.

As much as disclosure may seem like a good idea to you, people with invisible disabilities suffer a heap of discrimination, including the idea that they must somehow have an "easier" time than visibly disabled people (note: not true). Do you really want to expose your friend to invasive questions, smug "you don't LOOK sick" responses, skepticism, or harassment? Thought not. It's their call.