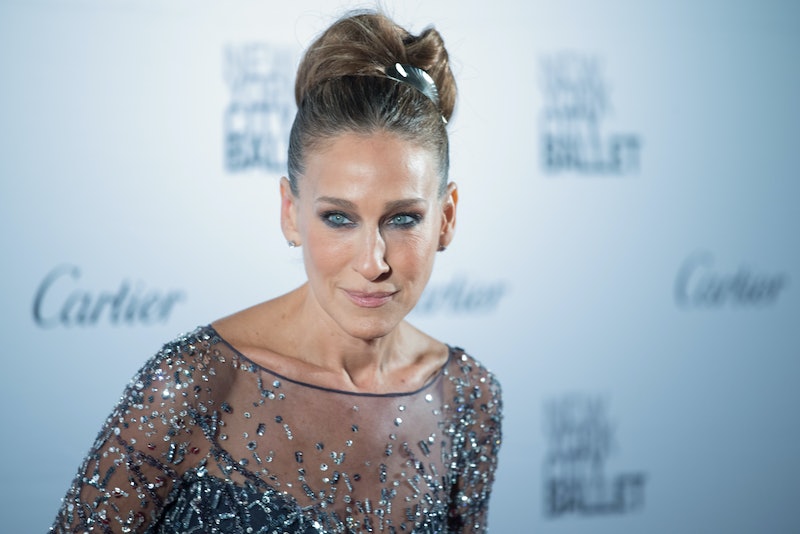 Carrie who?! Carrie Bradshaw's portrayer Sarah Jessica Parker wore a bun, channelling her inner ballerina while attending a ballet gala. The actress, who has been vocal about separating herself from her fashionable former Sex and the City alter ego, wore her hair slicked back into a massive bun at the crown of her head. It was her take on the "bunhead" look.

SJP also donned a multi-dimensional and sparkly Zuhair Murad dress. The gray color was like fashion's manifestation of a rainy day. The actress and shoe designer looked as elegant as ever, carrying an equally sparkly red bag that was the same color as Dorothy's slippers in The Wizard of Oz. It was a bold contrast against the blue and silver hue of the textured dress.

While I could envision Miss. Bradshaw (or Mrs. Big, really!) wearing this dress while out and about with Samantha, Charlotte, and Miranda, I am really only seeing Parker here. That's because this frock isn't trendy. The sheer top and the way it flared were at once classic and unexpected. But it was also appropriate for this chi chi event.

For someone who has worn a good decade's worth of unforgettable dresses, this ranks up there with one of Parker's best. I know that's saying a ton, but it's true.

SJP's bun was massive. But it was a balanced contrast to the slicked back front of her hair.

The sheer top of the dress benefitted from having only a delicate sprinkle of sparkle across the front, since the rest of the gown was super duper sparkly.

I haven't seen this much sparkle since Edward Cullen.

Ooh! A little sexy leg action. It's always a plus when you can see what SJP is rocking on her famous feet.

From the back, you'd think you were looking at a princess.

A little more leg action because why not?

I don't do up 'dos, but I'd do this do at a formal event. The height at the crowd is so mod.

The slouchy, crimson bag also added another element of contrast to the dress. It was unstructured, which added yet another contrast.

If SJP has inspired you to start doing buns, whether for a fancy event or while running errands, you can get some practice. Have some bun fun with ConAir's six-piece, bunmaker kit! It's pretty mistake-proof and lets you play with the bun look. ($5, ulta.com)

More like this
How To Master Baby Braids, According To TikTok
By Tomi Otekunrin
The Little Princess Trust Is Accepting Afro Hair Donations For The First Time
By Tomi Otekunrin
Here’s What Sarah Jessica Parker’s Canned Cosmo *Actually* Tastes Like
By Emma Garza
10 Swoon-Worthy Beauty Looks From The 2022 Cannes Red Carpet
By Olivia Rose Ferreiro
Get Even More From Bustle — Sign Up For The Newsletter