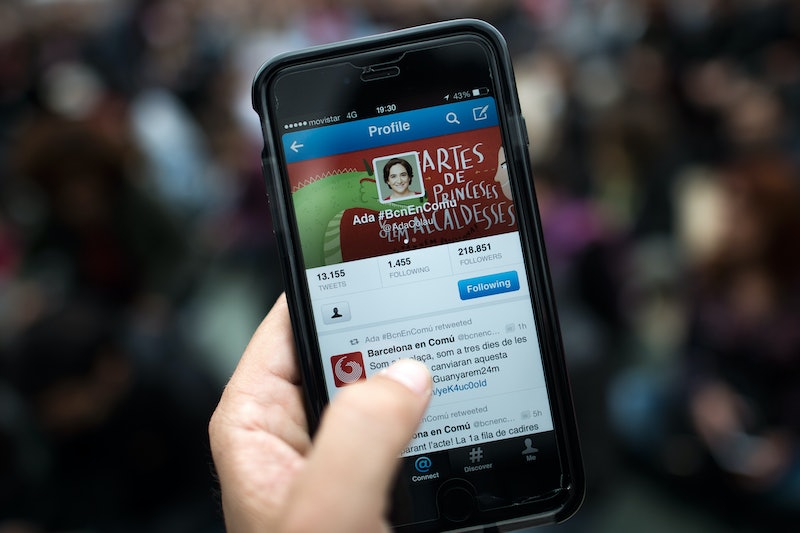 When it comes to your Twitter activity, you may want to stick to using your computer after seeing the results of this new study. Research published in the Journal of Communications found that tweets sent from your smartphone were 25 percent more negative than those sent from other devices. Titled, "Do We Tweet Differently From Our Mobile Devices? A Study of Language Differences on Mobile and Web-Based Twitter Platforms," the paper was authored by sociology and media researchers from the University of London, Bowdoin College, and the University of Maine. It might just convince you to think before you tweet.

The study was created to see how tweets composed on smartphones were different than those composed on computers. The desktop (or laptop, as the case may be) and mobile gap hasn't been widely studied before, hence why the study authors were interested in the topic. They also noted that their goal was to understand how using Twitter on your phone changes your habits. "Ultimately, we seek to understand whether our social media presentations of self tend to be more egocentric, negative/positive, gendered, or communal depending on whether they were tweeted from mobile devices or web platforms," they wrote in their paper.

In order to see how the source of a tweet affected its contents, the team collected over 235 million tweets (about five million per day) over a period of six weeks during the summer of 2013. They then analyzed the information according to the origin source of the tweet — that is, mobile or desktop — and developed data groupings according to word choices.

To do this, they used The Implicit Association Test, which measures attitudes that people are either not willing or unable to report themselves. Essentially, they're attitudes that you may not be aware that you hold, or that you don't want to own up to. As an example, let's say that you believe in gender equality and would openly state this. But let's also say that when you're asked to picture a scientist, you automatically see a man in that role — even if you're not completely aware of or able to admit this bias (part of you thinks it would make you lose credibility as a feminist to do so). This is how implicit bias works.

So back to the study. In short, what the researchers found is that how you tweet on your smartphone is probably very different than how you tweet from your desktop or laptop. "We found evidence that users tweet differently from mobile devices and that mobile tweeting is informing new behaviors, attitudes, and linguistic styles online," lead study author Dhiraji Murphy told TIME.

There's a lot more to be uncovered here in addition to what you tweet from. The researchers also found that the times and days you tweet indicate trends. Tweets sent early in the morning and late at night are more negative, while those sent towards the middle of the day are more positive. Tweets are also are more egocentric when sent at the end of the workday, in the late afternoon, and the least self-serving on Sundays.

The big question, of course, is this: Why are tweets sent from smartphones 25 percent more negative than those sent from computers? The researchers postulate that it might be because mobile Twitter users are tweeting their thoughts on the go, which leads to them using Twitter as a sounding board, whereas desktop users have more of a chance to filter themselves. "Since mobile access allows for real-time updates to a user's Twitter profile, this could encourage users to tweet experienced sentiment in real time ... Web users may be less inclined to share any sentiment at all as they may be more self-censored or because they tweet less spontaneously."

Additionally, Murphy noted to TIME that this "egocentric bias" might be emerging from our 24-hour web access. “Because everything has become more mobile, it’s reflecting more of what we’re doing in the moment. Some of the thoughts we had before that we weren’t communicating are now coming through our mobile devices."

Anyone else considering taking an inventory of their mobile Twitter usage?