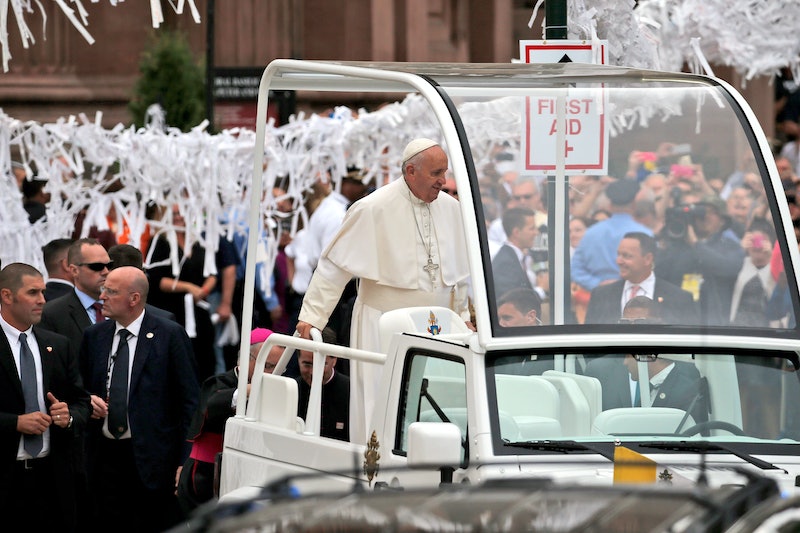 Pope Francis traveled around the United States on his recent visit in three different black Fiat models, and the two Popemobiles he used, which were modified Jeep Wranglers, were also manufactured by Fiat Chrysler. While Pope Francis doesn't officially endorse the Fiat — Vatican spokesperson Manuel Dorantes stressed in a recent statement that "the Holy Father does not personally endorse any specific brand he uses" — Americans quickly associated the pope with the Italian car. One Fiat dealer in Albany, N.Y., said that Pope Francis' visit — and Fiat usage — was a "blessing" for his business, adding that since the Pope's visit, he's seen a 60 percent rise in online Fiat interest. So while the Vatican may not endorse your costume, a Pope Francis/Fiat couples costume will definitely earn you respect at whatever Halloween shenanigans you find yourself in this year.

Dorantes explained to The Washington Post that Pope Francis "has an affinity for the simple and for the most affordable vehicles," and Fiat prices start at $19,935. But while the Fiats themselves may be accessible to many people, you're not likely to find a Fiat costume as easily as you would a Pope Francis costume, so you'll have to put in a bit more effort. Here's how.

1. Cut Two Pieces Of Scrap Cardboard Or Old Boxes In The Shape Of The Car's Sides

Flickr user Gary Cruz explained on his profile how he used cardboard boxes to make a Fiat costume for his son. Cruz started out by sketching the rough shape of the side of the Fiat onto the cardboard, using a photo as reference, as you can see in the image. Once you've sketched the outline onto one piece of cardboard, and cut out the frame with a heavy-duty pair of scissors or box cutter. When you have one side done, you can use it as a template for the other side of the costume, to make sure they're the same shape and size. A helpful tip Cruz notes on his Flickr page: Unless you're working outside, put a spare piece of cardboard underneath the one you're cutting so you don't ruin your carpet/flooring/table.

2. Once You've Cut Out The Sides, Tape Cardboard Panels On The Top Of The Car

You'll need to make the top panels wide enough for you to wear the costume and still have a cardboard frame around you at the top. Cruz taped the sides together first and then cut the hole for his son, but if you want to make sure you can actually fit into the costume, you can cut the frame of the box (hold it around you to make sure you can step in and out) before taping it to the sides.

To get the slope of the car's windshield and hood, Cruz used two cardboard pieces taped to each other and then to the sides. After making the panel for yourself to stand in, fold one flap of the board down to serve as the car's windshield. Then, tape a second box, folded at the front, in front of that as the car's hood — you'll want to tape the underside, too, so the car doesn't fall apart. If you're going for the open-air Popemobile look, you can also leave the windshield and side windows cut out, rather than painting them in later.

Now that you've cut out the box panels and taped them together, here comes the fun part. You could paint the open-air white Popemobile that Pope Francis used in his U.S. processions, or you could make your car the traditional black Fiats that carried him around the United States. Don't forget to draw wheels onto the sides!

4. Add On The Accessories

If you really want your Fiat costume to shine, you can cut holes in the front panel and attach small, battery-powered headlights on the inside. You'll also need to attach suspenders to the top, so that your costume actually stays on.

5. And For That Pope Francis Costume...

It's not hard to find a pre-made pope costume, but for a finishing touch, why not add on a replica of Pope Francis' glasses to make the look more authentic? A pair of large glasses that aren't too rounded would do just the trick. Halloween stores have plenty of eyeglass options, as does Amazon:

Now that that's done, "Pope Francis" can walk next to his "Fiat," and boom: you have the best couples' costume for Halloween this year. For more detailed instructions on making a cardboard box costume for your Fiat, check out Gary Cruz's Flickr page as well as these helpful articles from All You and eHow.

More like this
Kourtney Kardashian Got Married In A Heart-Stamped Mini Dress
By Allie Fasanella
An Honest Review Of The TikTok-Famous WalkingPad
By Kaitlyn Wylde
If Your Refrigerator Is A Mess, These 25 Organizing Products Can Help
By Courtney Young
These Things Are Really Weird & Interesting On Amazon & I Want Them All
By Julie Peck
Get Even More From Bustle — Sign Up For The Newsletter