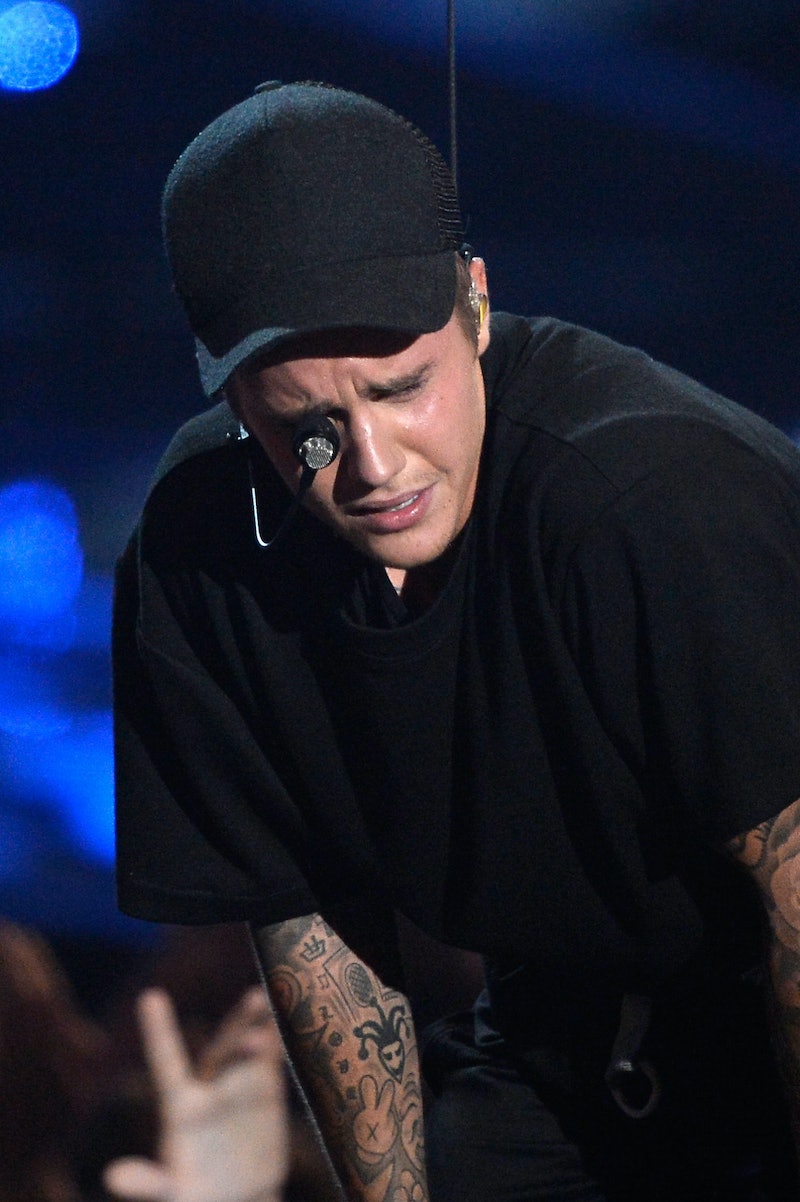 It's hard to believe, but Halloween is just a few weeks away. If you're still brainstorming what to wear on the big night, chances are you are not satisfied with selecting a predictable choice like Left Shark or "The Dress," which will both be undoubtedly all the rage this year. But maybe you still want to represent an important moment in pop culture from 2015, albeit in a more stealth way. That's why you should consider dressing up like Justin Bieber crying at the VMAs for Halloween.

Think about it. It was a big moment that night and it had everyone scratching their head. After all, Bieber did a great job performing during the show, so his emotional waterworks were quite unexpected. This costume would be instantly recognizable to anyone the least bit familiar with pop culture, but at the same time, Bieber crying at the VMAs got a bit lost in the tussle of other moments from the big night. Between Kanye West's announcement that he was running for president in 2020 and Nicki Minaj calling out Miley Cyrus onstage, Biebs' tears may not be the most obvious choice for a Halloween reference, which makes it the perfect combination of culturally relevant yet relatively unexpected. Read on to see how you can make this simple and hilarious costume a reality.

Luckily for you, the Biebs' outfit onstage was not all that complicated, and you probably own the clothing items already. But if you don't, I have some suggestions. It's basically a black baggy t-shirt like this one sold on Amazon ($17.49-$20.00).

And in true Bieber style, form-fitting black pants. Basically, if you want to go the comfort level (and why wouldn't you?) yoga pants like these sold at Amazon ($9.99-$22.99) should do the trick. No one will be able to tell with such a baggy shirt!

Along with the shirt and pants, he was also donning a plain black baseball cap, like this one on Amazon ($4.19).

To get into full concert mode, though, you will need a fake face microphone headset like this one on Amazon ($5.79).

Any Belieber will tell you, the pop star has his arms tatted up. Since he was wearing a short-sleeve shirt, many of them were visible. If you really want to go for authenticity, get a tattoo sleeve to wear under the black shirt, like this one from Party City ($5.99).

Or you could always go the temp tattoo route, like this one sold on Etsy (starting at $4.00) if that is more your style.

The tears are really the glue to holding this costume together. Now, you don't want to be doubled over the entire time you're wandering around on your adventure. But leaning over with your hands on your knees every now and then can't hurt. Personality is key. Wipe your eyes. Hold your head.

And carry around some eye drops, like these, sold at Amazon ($3.08). Heck, attach them to your costume with a piece of tape. You will need them.

If you really want to show your dedication, there is always the good old-fashioned chopping onions trick. Who knows, you might actually scare someone! And that is what Halloween is all about.