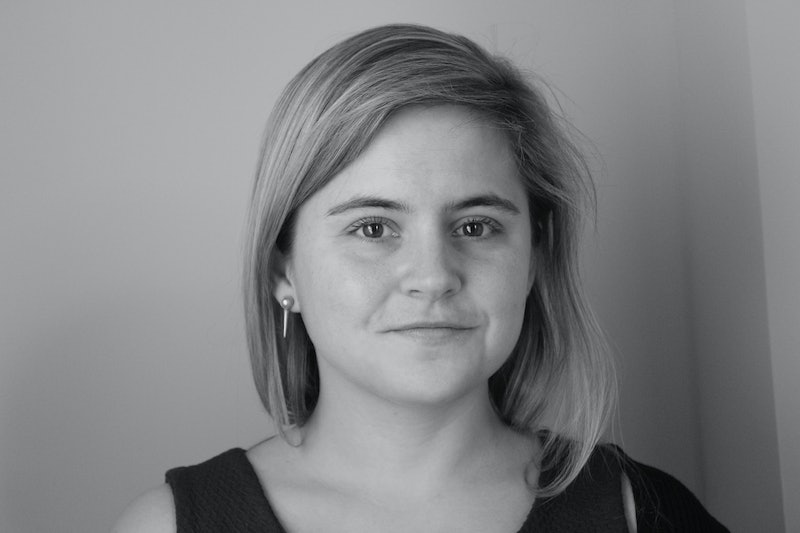 In How to Disappear Completely: On Modern Anorexia (Overlook), Kelsey Osgood explains that she's writing about her struggle with anorexia to strip away the glamour and delicacy of the skinny person. She's writing instead to expose the total horror and destruction of being obsessively thin, of devoting all her waking minutes to thinking about calories and weight. Osgood's candor and humor carry the narrative; the reader nods and laughs even while shuddering. She demarcates myths about anorexia while illuminating truths about what it's like to be hospitalized and in treatment. Ultimately, this is not a book for an anorexic or bulimic or her loved ones; this is a book for every Millennial, because, as Osgood points out, everyone has "eating issues" whether they're labelled or not.

Osgood spoke to Bustle about her book and her struggle to overcome anorexia, why she doesn't use Facebook, and her music tastes.

BUSTLE: You wrote that many people claim one must replace his or her eating disorder with another obsession or source of control. Is this true for you?

KELSEY OSGOOD: No, no, no. I remember all through high school, I saw one therapist after another who said I needed to find something to take the place of my eating disorder. I tried all the typical hobbies: knitting, collaging, drawing, and on and on. When nothing felt quite as all-consuming, I was beside myself. Now I’m really fucked, I thought, because I figured there must be some anorexia-shaped hole inside me that nothing else could fill. My last therapist, who was really intelligent and wonderful, heard me repeat that aphorism about replacement once and said, “No way! You’re getting high off your anorexia, not fulfilling a basic human need. It’s an unnatural feeling you’re getting from this.” When she phrased it that way, it started to make better sense. We don’t tell recovering heroin addicts that they need to find something they love as much as heroin. More than likely, that just isn’t going to happen! So it’s about learning to trudge through life, with all its natural highs and lows and stretches of dull days, without manufacturing that pseudo-transcendence.

I struggle to talk to friends about their eating habits, and I'm never sure when to bring up worries or concerns about friends who seem obsessive. It seems being honest can make things a lot worse.

Yes, I think it’s possible that it could. But it can also be dangerous to ignore, or it can give the sufferer the impression that his or her behavior isn’t affecting anyone else, which is usually untrue. I think the approach depends on the person, and can change as his or her illness progresses — if he or she does horribly with direct confrontation, it’s probably not a good route, but if candid, honest intervention is usually appreciated, it’s worth a shot. (Don’t get me wrong — the anorexic is probably less than enthused with the topic despite how rational he or she is normally, but some shimmer of the former self might remain.)

I will always remember, to contradict myself, two good friends of mine — and each other’s — who differed on how to approach me during a bout. One shut down completely, and acted cold and distant. The other was just her normal self entirely. Later, the latter told me that she wanted to just act like I was still the same funny person she had always known because she was aware that I had doctors and nutritionists for whom I was strictly a patient, and she didn’t want me to feel as if I had to play that role socially, as well. In other words, I had people taking care of the medical and psychological aspects of the illness, and what I needed from my friends was just to be themselves.

There was a New Yorker blog post that reflected on the difficulty of discussing and writing about eating disorders. Not only can description of the symptoms glamorize the disease and instruct the reader, but because it's an addiction of lack — abstaining from food, not doing much — a memoir about anorexia is an inherently boring story. Do you ever feel that way in retrospect: that you were a "boring" self then?

Absolutely. I could tell, too — when I attended social events or hung out with people, I knew I was dull to be around. Not only did I really have nothing to talk about, but also I was listless, a little paranoid, and always waiting to leave wherever I was so I could go back to my room, turn the heat way up, and perform whatever ritualized torture I had scheduled. I think not only was I boring to hang out but at times rather aggressively discomfiting. When I was really ill, I think the fact that I was so unhappy was visible on my face and noticeable in my demeanor, and I could tell others were repulsed or upset by my aura (I crossed my arms a lot, if I recall, and my muscles were always tensed up, which should tell you something) but I felt helpless to change it.

When I'm not my best self, I compare myself to other people constantly: I run slower, I have weirder knees, I don't say "um" as much. You tap into how competitive and comparison-focused anorexics are. Do you have a mantra for removing yourself from that thought process?

That’s a great question. It’s also applicable to everyone, especially if you happen to live in New York, as I do, where every person is more ambitious or accomplished or polished-looking (or all of the above) than the last. Maybe it’s my CBT [cognitive behavioral therapy] background, but when I’m feeling that urge to measure up, I tend to go for what I call a mental “toolbox,” which is filled trusty old lessons or personal anecdotes I know have helped me through it in the past. I have a bunch of stuff in this particular toolbox: some personal stories that I won’t share, a handful of Chasidic quotes, choice wisdom from Maurice Sendak, some Simone Weil, a dash of Tao.

If I’m really stuck in it to the point where a little saying won’t do, there are a few activities that can help. These can include: spending time with children, getting work done, praying, walking, dancing, or doing really practical shit, like fixing something that’s broken.

I also have to say that I keep myself out of situations that are likely to trigger that kind of competitive thinking. Not that I’m a hermit, but I don’t have any social media at all, which is not the kind of thing a book publicist wants to hear. Personally, though, I think just lets me abstain from that big fake Instagram-envy clusterfuck. The whole thing is so theatrical, and yet we can’t help but believe that what someone posts is indicative of the quality of his or her life, and means that the quality of our lives — and we know our own warts — just isn’t as good. Plus, most people I know who engage with social media don’t seem to actually enjoy it, or at least would never deign to suggest that time spent on Facebook is well spent. So if you just get the hell off it, you have extra time to do other things like the ones mentioned above, which makes you feel better about yourself, and less inclined to mentally compare yourself to someone else. Score one for you and take one away from Mark Zuckerberg, who can afford it.

On another note: Are you a Beyoncé fan? Any thoughts on her latest album? I loved "Pretty Hurts," but she is also so beautiful...

Admittedly, I have not listened to it. I’m embarrassingly out of touch with music. I listen to Gregorian Chant, for chrissakes. Should I listen and then report back? Half-kidding here.

More like this
10 Must-Read Books Out This Week
By K.W. Colyard
25 Spell Books For Every Type Of Witch
By K.W. Colyard
Annie Lord’s Memoir Will Make You Believe In Love Again
By Shahed Ezaydi
16 Novels That Paint A Realistic Portrait Of Abortion
By K.W. Colyard
Get Even More From Bustle — Sign Up For The Newsletter