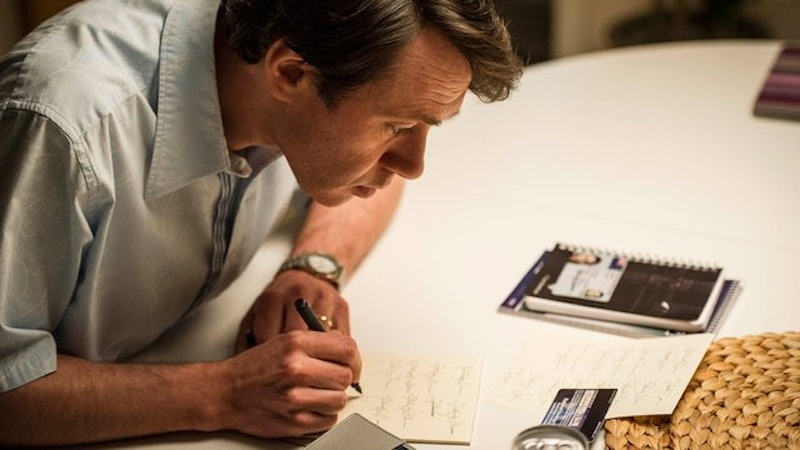 When watching a particularly frightening movie or TV show, reminding yourself that it's fictional can stop you from getting too scared. But the story of ITV's The Widower, set to make its American debut on PBS this Sunday, offers no such consolation. Based on true events, the real Malcolm Webster's story is just as scary as the television miniseries based on his crimes. One small comfort is that after the pattern of his behavior emerged (spoiler alert), Webster was caught and prosecuted, and is currently behind bars. Sure, that's a spoiler for The Widower, but it's a comfort to know that Webster was convicted for killing his first wife, Claire Morris, and attempting to kill his second, Felicity Drumm, as the BBC reported in 2011.

However, even though Morris died in a fatal car crash in 1994, Webster was not initially suspected of a crime. According to the BBC, "the death of the 32-year-old — married for just eight months — in the crash was investigated and treated as a tragic accident." So it wasn't until his second wife, Felicity Drumm, was almost killed in a similar car accident that Webster had to worry about being caught. But according to The Daily Mail, Webster's reaction to Drumm's accusation was to tell her "You would have died happy." Incredibly chilling, but somehow even Drumm's survival wasn't enough to take Webster down right away.

After leaving his native Scotland following Morris' death, and New Zealand after his attempt on Drumm's life, Malcolm Webster returned to Scotland and allegedly targeted yet another woman, this time more explicitly looking for money. According to The Daily Mail, "he told Simone Banerjee that he had leukemia and even shaved his hair and eyebrows to gain her sympathy," all with the intent of marrying her (bigamously, because he never divorced Drumm) in order to get money from her. Luckily for Banerjee, The New Zealand Herald reports that when Felicity Drumm and her sister went to the UK police, it finally sparked an effective investigation into Webster's crimes in 2006, 12 years after Morris was killed. By 2011, after "one of the longest trials in Scottish legal history," according to The Daily Mail, Webster was sentenced to 30 years in prison. He was convicted for Morris' murder, the attempted murder of Drumm, fraud, theft, and attempted bigamy.

Also to thank for putting Webster away is UK detective Charles Henry, who will be a big part of The Widower. The miniseries encompasses everything from Webster's wedding to Claire Morris until his capture in 2011, so it will be packed with horrifying twists and turns.

Since his 2011 conviction, Express reports that Webster has continued to maintain his innocence, and after dropping his appeal of the conviction, Webster's lawyer stated: "His position remains entirely unchanged. He maintains he did not commit the crimes and the verdicts of the jury represent a gross miscarriage of justice ... He has now instructed me that he considers that for me to advance any argument against his sentence might wrongly give the impression that he had changed his position and is now seeking simply to mitigate his guilt," according to the BBC. In late 2014, he submitted his case for another review.

Since then, Webster has only made the news once more, when The Mirror revealed that he works as a tour guide at a Holocaust museum while serving his prison sentence. Though knowing the real details behind a fictionalized story can often make the adaptation less exciting, in this case, it's almost more of a relief to find out that in real life, the man was brought to justice, especially after seeing his crimes on The Widower.