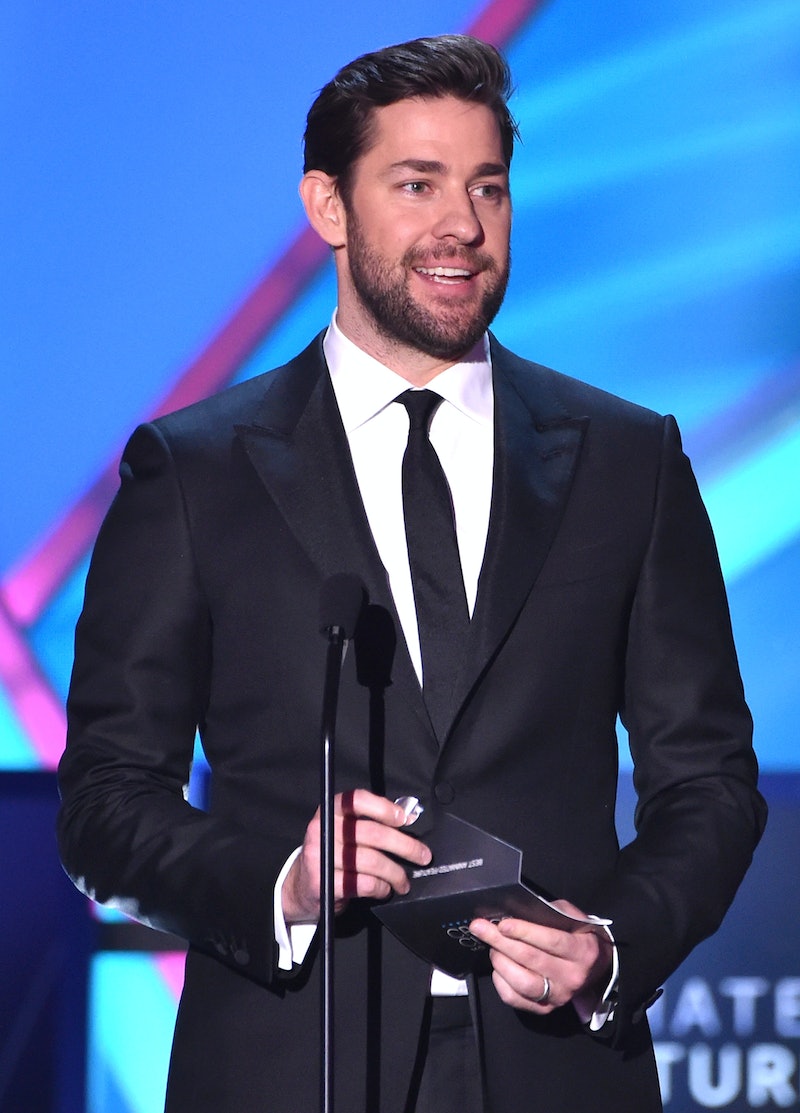 Take the director behind the truly wonderful Broadway phenomenon Hamilton, add John Krasinski, and we'll be first in line when the tickets go on sale. Krasinski will make his stage debut in an Off-Broadway production of Dry Powder, directed by Hamilton's Thomas Kail. Krasinski will play "the managing director of a private equity firm" in Sarah Burgess' play, according to a statement released by the Public Theater, where the play will enter previews in March of next year.

This opening marks the world premiere of Dry Powder, a comedy that is broadly about the American economy and hones in on one firm that must weather the public-relations woes that result from throwing an extravagant party in the same breath as it forced layoffs at a large grocery chain. (The play's title is derived from a term used in finance to describe assets that can quickly and easily be liquidated, akin to having cash on hand.) Krasinski's character, Variety reports, devises a solution to his firm's problems, but must face off against a co-worker with entirely opposite motives. Dry Powder will run from March 1 through April 10 at the Public, which is notably where Hamilton began its run.

Krasinski made his name on screen before turning to Broadway, unlike many stage actors who make the reverse trek from live audiences to the cold eye of a camera. Still, he's far from the first television or film actor to decide to test the waters off- or on-Broadway.

Stone made her Broadway debut in last year's production of Cabaret. She took over for Michelle Williams in the role, though Vulture reported that she was actually their first choice to fill the iconic role as Sally Bowles.

Like Stone, Sienna Miller performed as Sally Bowles in Broadway's Cabaret, but it wasn't her first time on the big stage. Though she is classically trained in drama and has made numerous appearances Off-Broadway and in London's West End, she first appeared on Broadway in the 2009 revival of August Strindberg's After Miss Julie.

It's inevitable, when you begin playing a part at age 11 and continue it well into adulthood, that you in some way come to be identified with that character. This is certainly the case for Daniel Radcliffe, whose name is still synonymous with Harry Potter even after the eight-part film series has wrapped. But he's an accomplished stage actor in his own right — he first played the principal role in Equus in London in 2007 and continued on Broadway through 2009. He also performed in How To Succeed In Business Without Really Trying in 2011.

At the time, Elisabeth Moss was best known for her role as Zoey Bartlet in The West Wing — these were the days before Peggy Olsen and Mad Men — but she also had a brief run Off-Broadway in Franny's Way, playing young Franny, whose name was an homage to the J.D. Salinger character of the same name. Moss moved to New York for the role at age 19, she told the New York Post.

Shields made her film debut at age 13 in the 1978 film Pretty Baby. Eight years later she first appeared on stage in an Off-Broadway production of The Eden Cinema , a play by Marguerite Duras, the French writer best known for penning the screenplay for Hiroshima, Mon Amour and her novel L'Amant. Since then, Shields has appeared in a West End production of Chicago, a stage adaptation of The Exorcist in Los Angeles, and on Broadway in Cabaret and The Addams Family. Her stage career has paralleled the trajectory of her film career, as she's worked in both mediums throughout her time as an actor.

While seeing dead people might haunt the young Haley Joel Osment for the rest of his career, it hasn't stopped him from pursuing work beyond The Sixth Sense. In addition to his film career, Osment starred in a short run of American Buffalo , a 2008 revival of the David Mamet play that also featured John Leguizamo and Cedric the Entertainer, in the latter's Broadway debut.

The skills associated with stage and screen acting overlap to some extent, but require different subtleties — for example, the camera catches the intricacies of emotion, while stage acting requires more physical presence and the ability to emote for an audience. For those actors who can traverse between the two realms of performance, it offers them the chance to hone different elements of their craft, and the excitement of the stage cannot be topped.