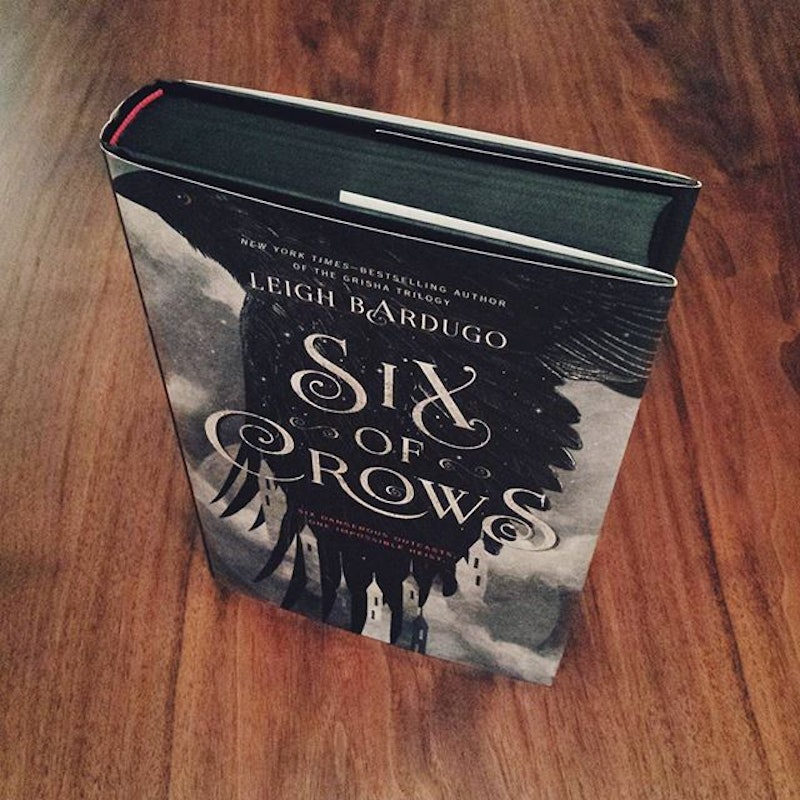 If you held onto The Grisha Trilogy and never, ever wanted to leave its world, the goddesses of publishing have heard your pleas. Leigh Bardugo's Six of Crows tells an entirely different story from her popular trilogy, but she returns home to the universe she built to tell it. Six of Crows moves from Ravka to the nearby island Kerch and gives us more of those elite magical humans known as the Grisha (Phew!) But this time, an entirely new bunch of misfit teenagers take part in a fantastical Mission: Impossible, Ocean's 11 mash-up story about a (potentially deadly) heist. Oh, and it's in the future, post Ravka-Civil War. It's as epic as it sounds.

Kaz Brekkar is the mysterious, cane-wielding teenage criminal prodigy of the street gang the Dregs, causing a stir in the city of Ketterdam, a bustling hub of trade — of both the legal and black market kind. His talents are scouted by a merchant hoping Kaz can save a kidnapped chemist who has created a drug that can amplify any Grisha's power to astounding heights. Fearing the war that would break out if the drug entered the mainstream, Kaz must get to the chemist before the secret it out. In turn, Kaz and the rest of his crew will receive a life-changing amount of money.

The only problem? The chemist is trapped in an impenetrable fortress. So, Kaz is going to need lots of specialty help to even have a slim chance of success.

Along the way, readers meet Kaz's recruits: Inej, a whisper of a spy known as the Wraith; Nina, a Grisha Heartrender who uses her skills to survive in the brothels; Matthias, who begins the story in jail as a traitor; Jesper a smooth-talking sharpshooter; and Wylan, the son of the wealthy merchant. Several of these voices tell the Six of Crows story alongside Kaz, and so the book is packed with all kinds of people, magical or not, from different backgrounds that have different perspectives on the world. We hear not only their account of the heist, but why they know Kaz, a criminal, in the first place.

Even if you think you're not into YA, Six of Crows is a dark fantasy adventure that you're going to need to read, especially for these five reasons.

One look at the laundry list of characters above and you should see what I mean. Bardugo gives us thieves, murderers, convicts, and gang members and asks us to root for them to win a dangerous wager. It's not even close to a black-and-white, good-versus-evil narrative, and that's part of what makes it so exceptional. Bardugo makes us question whose side we are on, asking us complex moral questions without ever having to point directly at us readers and say it outright.

Bardugo gives all of her six main characters their proper due, spinning a three-dimensional tale around them of who they are, where they came from, and what might be influencing their motivations moving forward. Let's just say that for some of them, it's definitely not about the money. There's questions of loyalty, pride, debts (and I don't just mean monetary ones), love, and a whole wealth of humanity reverberating through Six of Crows and its characters. Just because some of the characters have magical powers doesn't mean they're any different from you or me.

This Isn't Your Standard "Chosen One" Narrative

Young adult, and adult, literature, particularly that of the fantasy or dystopian variety, has been in a trend of giving us "the chosen one" who is fated to rise up a rebellion, overthrow an evil power, or otherwise save the world. You won't find that in Six of Crows, and that's to its benefit. Look, we love, love, love Katniss Everdeen, Tris Prior, Harry Potter, and so many of the others, but it's incredibly refreshing to step outside that trope and instead see people as just that: ordinary people, even if they use magic. These six teenagers are definitely not the chosen ones; they are the ones relegated to the dark corners of society. They take up their adventure out of a sense of desperation, not of destiny.

When you open up a hard copy of Six of Crows, you're greeted by not one but two detailed maps. The first maps out all the regions of Bardugo's universe so you can clearly see where Kerch and Ketterdam are in relation to The Grisha Trilogy's Ravka and the rest of the countries around the True Sea. The second lasers in on The Ice Court, where the kidnapped scientist is behind held, and where the six misfits have to break in to. (Think of it as an even more fortified Langley from Mission: Impossible.)

Let's put aside for a second just how stunning the design of the book is with its inky black pages and drawings, and let's focus on Bardugo's intricate, imaginative universe she has built. It's clear she's inspired by the masters of fantasy world-building like Tolkien with Middle Earth, George R.R. Martin with Westeros and beyond, and Ursula K. Le Guin with Earthsea, but Bardugo's world is inspired by something even closer to home.

Bardugo borrowed elements from a piece of her Russian heritage to model her world after a czarist Russia. As she said in an interview with Deseret News National:

In my family, Russia was always cast in the role of the glamorous oppressor. Even when I was a kid, it took on a kind of larder than life status, and in a way, it took on the traits of a fantasy world: beautiful but brutal, magical but dangerous.

This passion for her model world comes through clear with her detailed maps and her immersive sense of place.

When the merchant is laying out the reason for needing to save the kidnapped chemist, it's easy to forget for a moment that we're in a world of magical healers, Etherealki, Materialki, and other fantastical human powers. They talk about how one country's actions can reverberate across the world, about how political information could lead to unrest, about the fall-out of a war, and about whether or not to offer a traitor to his country asylum in your own. It sounds a whole lot like the bureaucratic struggles and conflicts in the world around us. You might think that makes it less exciting, but I assure you, it makes it even more so.

Combine this with Grisha having faith as a very real, very present part of the universe. Unlike so much other literature, when Bardugo writes about religion, she doesn't present it as the "issue" of an issue novel. Rather, religion, just like the rest of the political structure, is an embedded part of the culture that must be taken into account in any disagreement or bold strategic move. It adds a whole other element to the discussion, because for some of the six characters on the heist, it definitely informs who they are as people.