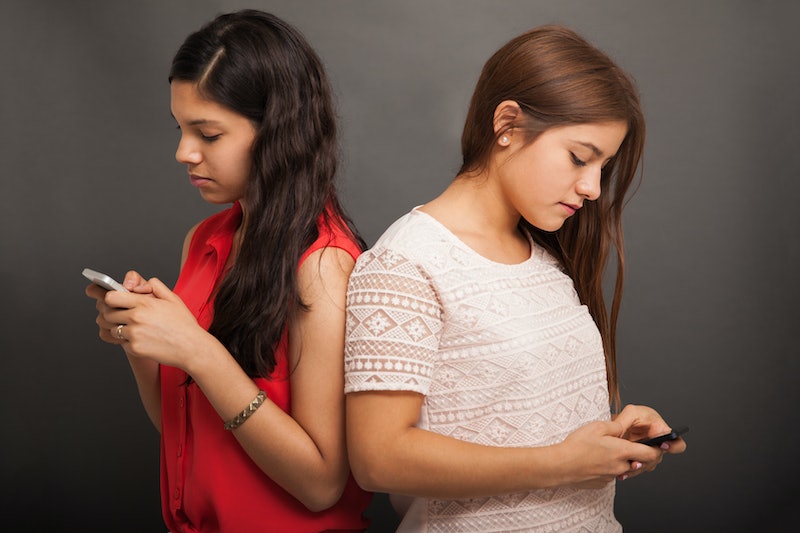 We're often inundated with opinions about how the digital age is rendering young people anti-social robots, because of all that time they spend "staring at screens" and not having "real interactions" face-to-face. Of course, what those of us who spent our young lives staring at screens know is that what we're actually doing on there is socializing with people. We're connecting. We're interacting. We're just doing it digitally. A recent Pew survey looked at teenagers expressing romantic feelings on social media.

It's not that love is dead because young people (specifically teens age 13-17) are all disconnected, swipe-addicted sexbots; they're actually using social media to safely explore romantic connection and expression. It's a tool that's helping them connect and express their emotions with less risk than IRL interactions, not something that's damaging their ability to do it in the first place. Of course, there are also some downsides, but offline teen love had its downsides, too.

As writer and activist Lindy West put it when she was accepting the Women's Media Center Social Media Award:

"I hear a lot these days about the lazy, aimless ‘millennials’ — about how all we want to do is sit around twerking our iPods and Tweedling our Kardashians — and I also hear people asking, ‘Where is the next generation of the social justice movement? Where are all the young feminists and womanists and activists?’ Dude, they're on the internet. They're working their asses off. And if you can't hear them, it's because you're not listening."

Here are 10 revelations — some shocking, but most uplifting — from the study:

2. Social Media Flirting Is Almost As Prevalent As IRL Flirting

While 55 percent of teens report letting someone know they're romantically interested by talking to them, the other top modes of flirting all involve social media:

No shock here, but 35 percent of girls have had to block someone who was flirting with them in a way that made them feel uncomfortable, while only 16 percent of boys had to do the same.

Of the 30 percent of teens with dating experience:

6. Teen Daters Use Social Media To Flaunt Their Relationships To Others

7. Almost All Teens In Relationships Expect To Hear From Their Partner Daily

8. Most Teens Break Up In Person

9. Controlling Behavior Is Not

10. Teens Are Still Jerks About Breakups