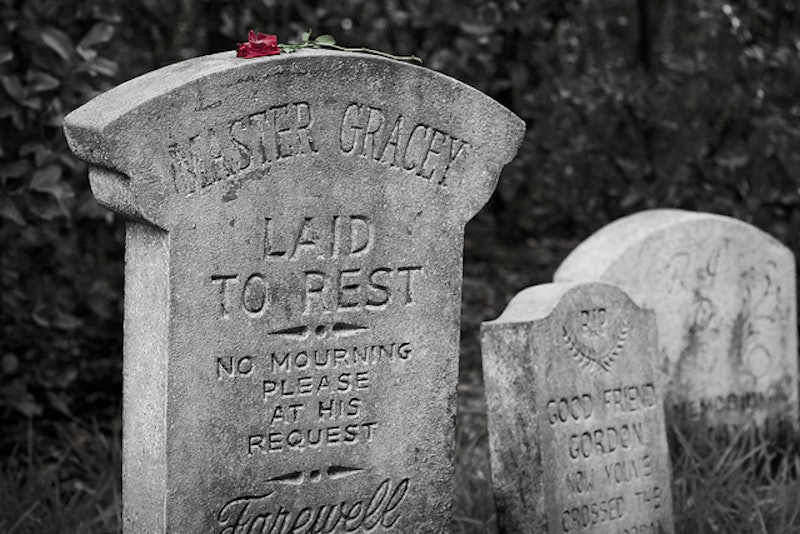 From the ancient Egyptians to the Vikings, from modern cults to pop culture, mankind has always been obsessed with death. It's the subject of scholarly pursuits for doctors, philosophers, and psychologists, and there is an entire field of study devoted to it called thanatology. It has long been the subject of poems, the inspiration for songs, and a common focus in the news, media, and even entertainment. People have been and will always be fascinated with death. It's kind of weird, I know.

As morbid as it may be, death is one of the only universal experience we all share. It's heartbreaking and often scary. It's mysterious, no matter what the circumstances — and sometimes, death can be really strange, too. When someone's death is odd or creepy or bizarre, it becomes even more fascinating than usual. And when that someone is famous? Well, then death becomes the subject of near obsession.

Authors' lives are already the subject of interest to readers, as well as the educational, media, and entertainment industry, but when their deaths are weird, they become completely intriguing subjects. They might be at the hands of someone else or caused by a freakish accident. Much like the authors themselves, authors' deaths are often shrouded in mystery, the kinds of things that make you scratch your head and have you Googling for days.

From death by choking to causes unknown, here are seven of the strangest author deaths, so strange that you might have to ask yourself: Is this true, or is this from a book?

Though Samuel Clemens, better know as Mark Twain, died of natural causes, the circumstances around his death had a bizarre aspect to them. The The Adventures of Huckleberry Finn author actually predicted his own death — well, sort of. Twain was born on the same day Halley's Comet appeared, something that only happens ever 75-76 years, and he claimed that he would die the next time it was visible. When the comet was next seen in 1910, Twain died the day after the sighting. Spooky, right?

Percy Shelley, English Romantic poet and husband of Frankenstein author Mary Shelley, died when he drown in the Gulf of Spezia at the young age of 29. Although drowning not way seem like a strange way of dying, the unknown factors surrounding Shelley's death are what raise so many strange questions. People have speculated that it wasn't the bad weather that caused the poet to fall off his boat and drown, but that his boat may have been rammed by another boat, or that he commit suicide. Though likely myths, these theories still make Shelley's death seem a little odd.

A revolutionary activist, book publisher, and author, Barbara Salinas Norman dedicated her life to writing and writing and sharing Latino stories, but near the end of her life, she became increasingly more reclusive. When her brother-in-law hadn't heard from her in two years, he decided to search for her, but he didn't have to look very far. The author was found mummified in her home in Santa Fe, having been dead for likely over a year. Though her death was from natural causes, becoming a legitimate mummy is a bizarre way to end your life.

When philosopher and author Albert Camus died in a tragic car accident, all of France was shocked and saddened. But 51 years after his death, an news broke that maybe it wasn't an accident at all, but that Camus's death was caused by the KGB. Though it seems like something that could be possible, many have dismissed this as a conspiracy theory. We may never know the truth.

A dark and twisty man himself, it seems fitting that Edgar Allen Poe's death is shrouded in mystery. When Baltimore Sun reporter Joseph W. Walker found a delirious Poe stumbling outside in the rain, he knew something was very wrong, but he didn't know what. Four days later, Poe died without being able to explain what he had been through. All the poet could do was call out for "Reynolds," an unknown person who is yet to be identified. Many theories surround his death, from alcohol withdrawal to rabies, but one thing is clear: it is downright creepy.

If the martinis won't kill you, the toothpicks will. Just ask Sherwood Anderson, author of Winesburg, Ohio, who was on a cruise with his wife when he began suffering from extreme stomach pains. A few days later, Anderson was dead and it was discovered he had swallowed a toothpick, which damaged his internal organs and caused his death. Swallowing something weird is a strange way to go, but it happens more than you'd think.

Speaking of death by swallowing, Tennessee Williams met his untimely death when he choked on a small bottle cap. The medical examiner identified the cap as one that would be on eye droppers or nasal spray, but the real question is, how on earth did Williams get it in his throat in the first place? Although his death wasn't labeled as suspicious, it is still a bizarre and very strange accident.