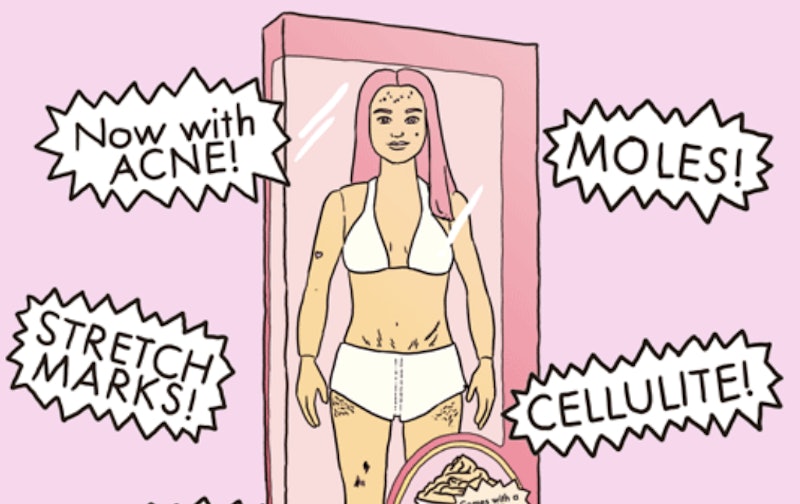 One of my favorite aspects of writing on the Internet is being able to insert LOL-worthy memes into my work. That's why the idea of putting together an entire post dedicated to funny body positive memes makes my heart sing. There's nothing quite like tackling a heavy, emotional subject with a little bit of comedy to make it just that little bit less daunting.

Although memes might seem kind of old school, their power on the World Wide Web shouldn't be underestimated. After all, the concept of the meme extends much further back than the Internet. In case you're not up on the official definition, a meme is simply "an idea, behavior, or style that spreads from person to person within a culture," according to Merriam Webster. Online, this could translate to a small piece of information spreading from individual to individual, taking on cultural meaning through a virtual game of telephone.

Even though we may often think of memes as being images with text on them that convey an idea, a meme could actually be anything from a hashtag to a GIF. For example, when I say #YOLO, you probably understand what this hashtag means without explanation, right? The same would likely be true if I were to reference the "Ain't nobody got time for that" GIF. That's a meme for you, my friend.

Now that we're good on the history lesson, let's get into some laughs with these 15 body positive memes to make you LOL.

1. I Didn't Ask For Your Opinion

Use this meme whenever someone makes an unsolicited comment about your body.

This one just makes me think: We're fat, we're feminists, and we don't give two you-know-what's about what you have to say.

It's the face y'all. That face. You can't buy this kind of entertainment because only YouTube personalities have the ability to make us laugh this much.

Making fun of our fat-phobic diet culture can be a lot of fun.

I sent this Tweet out last fall and still agree with its contents. I was trying to make fun of the idea of what it means to be sexy, which is where the LOL comes in.

7. The Curse Of Comparison

The Internet can be a curse and a blessing all at once. It's a great tool to use to get connected to other body positive bloggers and humans, but can also throw diet ads, weight loss programs, and body shaming articles in your face. In other words, your feelings about the Internet are probably the very definition of a love/hate relationship.

There is so much happening here, and it is all good.

9. The Sheer Genius Of This

I really love memes that don't necessarily come out and make a point directly, but that rely on the nuances and subtleties of the artwork to make the statement. And boy, does this make a statement.

Remember that it has more than one definition. "Healthy" can also mean of a good size, of abundant quality, or of large size.

This turning around pose is something often observed in supermodels. Seeing arguably more relatable women co-opting it makes the whole thing ironic times 10 in the most LOL way possible.

12. Where Bullies End Up

Karma will always come back to bite you.

14. Tess Holiday Causing Us To Giggle And Blush

Sometimes there's no better image than that of a happy person with a marginalized body type pulling a cutely funny face.

This is my favorite body positive meme ever. At the end of the day, this is what it's all about, right?