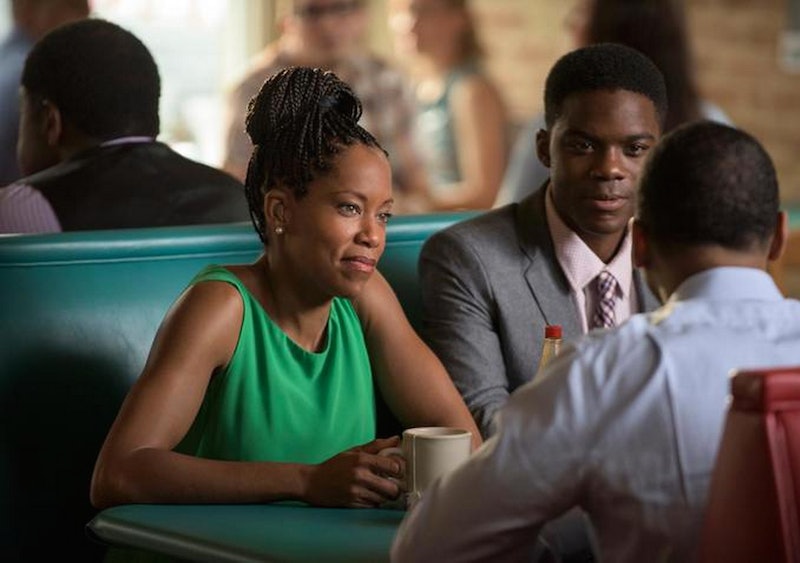 What happens in Jarden, Texas, definitely doesn't stay in Jarden, Texas. The incredible HBO series The Leftovers returns on Sunday night and there are plenty of new questions to be asked based on the Season 2 trailers alone. Of course the biggest question is what in the world is going on Jarden aka "Miracle National Park" in Texas? According to their city limits sign, the town has a population of more than 9000, and not one of them disappeared during the Sudden Departure. That's right, not a single Miracle resident was affected by the strange phenomenon that took two percent of the global population. And, in Season 2, when Kevin, Nora, and Jill decide to pack up and move out of Mapleton to head to Miracle, they encounter new next-door neighbors the Murphys. But who are the Murphys and are they a friendly family or a new threat?

John, Erika, Michael, and Evie Murphy are seemingly a loving, idyllic, and wonderful family living in a town that Erika's grandmother always told her was "chosen." Their family is a staple in Miracle. John is a firefighter and Erika is a doctor who works in the urgent care center at Miracle. Michael is a god-fearing (and loving) Christian unlike his father, while there's not much said about Evie aside from the fact that she's a free-spirit. But, as The Leftovers creator/executive producer Damon Lindelof says in the "Meet The Murphys" video, "the more idyllic a family appears, the less idyllic they are." Clearly we know now that there's more than meets the eye with the Murphys.

For one we know they can't totally be trusted, the trailers make that pretty obvious, and that's even before taking into consideration Lindelof's little tease from the video above. So, what can we glean from the snippets we've seen of them?

1. They're Clearly Hiding Something Big

It looks like Erika is either burying something or uncovering something in this picture taken from The Leftovers second trailer for Season 2. Could the Murphys be hiding the fact that they have killed people in the past who threaten their way of life in Miracle? Clearly the townspeople are not all that pleased with Matt coming in and talking about his past experiences with the Sudden Departure and beyond, according to the trailer, but now I'm worried about what kind of town Miracle is and what kind of family the Murphys are, especially since Kevin, Jill and Nora are now living right next door.

We learn from the trailer above that John actually went to prison for more than six years. Now, that's no reason whatsoever to just judge someone and believe they are evil as many people who go to prison do get rehabilitated. John is seemingly rehabilitated to the rest of the town. But, considering what else we see him do in the trailer, from kicking down doors, beating people up and setting fire to things, it's possible he is controlling things in Miracle with a violent fist.

3. John Is More Violent Than We Know

And, just what do we know about this violence? There is a man in that second trailer for The Leftovers that asks, "Do you have any idea who that man is? What he does?" It's the same man whose wounds are then seemingly treated in the "Meet The Murphys" trailer. What in the world is going on here? Is it possible that John is a violent leader and enforcer in this town who kicks down doors and people before truly discovering whether or not they are guilty of whatever he believes they've done? Could his family in general be more sinister?

4. Evie Disappears, But Do We Know Why?

We're told in the trailers that Evie and her friends haven't come home and are now missing, but we don't quite know what's happened. Clearly the Murphys are off to investigate this case as they will be determined to find out what happened to their daughter. But, could John's methods of finding his daughter be... Less than legal to say the least? What if Evie and her friend actually ran away to escape a secretly terrible life?

Something messed up is going on in Miracle, and I have a strong feeling that the Murphys, (or at the very least just John Murphy) are directly involved. But, we'll find out more on Oct. 4.

More like this
The ‘Love, Victor’ Showrunner Gave Fans Hope For A Possible Spinoff
By Brad Witter
Legacies Showrunner Said There Is Still Hope For More Vampire Diaries
By Gretchen Smail
'Stranger Things' Fans Are Begging For Steve To Live For The Funniest Reasons
By Grace Wehniainen
Superman & Lois Season 3 Will Introduce A Complicated New Supervillain
By Brad Witter
Get Even More From Bustle — Sign Up For The Newsletter