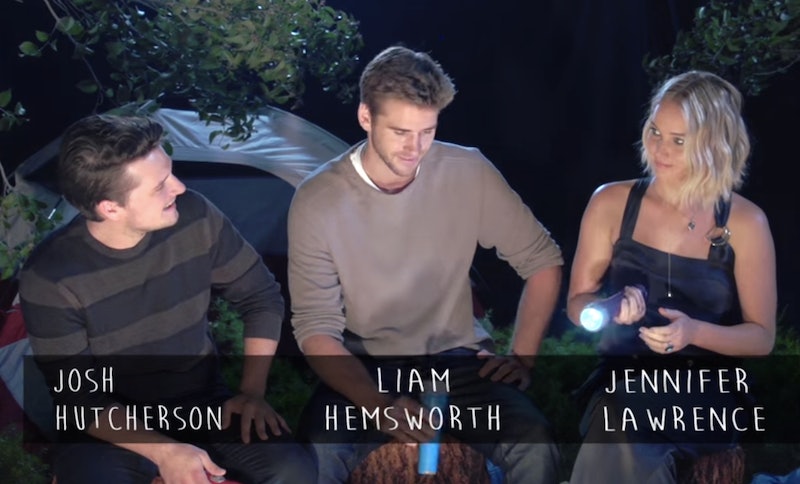 Jennifer Lawrence is a woman of many talents. I think we all know that by now. Over the course of the time since her breakthrough role in The Hunger Games franchise, we have learned a great deal of things about Lawrence, from the fact that she curses like a sailor, to the fact that she is always hungry, to the fact that she and Nicholas Hoult are the cutest couple in the world and no one will ever convince me any differently. Now, after having seen Lawrence stuff marshmallows into her mouth until her cheeks were bloated while attending a "campfire" with Josh Horowitz and her Mockingjay — Part 2 co-stars Josh Hutcherson and Liam Hemsworth, I've learned something new about Lawrence: she is always up for a challenge.

Then again, I suppose I should have learned that already since the actress has always seemed to be fearless to me. It takes a certain kind of bravery and strength of character to talk about peeing so freely and frequently during interviews. But the amount of marshmallows that Lawrence can fit in her mouth isn't the only surprise that this campfire roundtable had in store for all of us. There was also a surprise appearance from Lawrence's newest friend Amy Schumer — sort of — and eight other best moments that make this just about the greatest thing you will ever see.

1. When She Tried To Distract Josh With Her Flashlight

Because, you know, maturity is not always the name of the game with Lawrence. Especially where Hutcherson is involved.

2. When She Cracked Up & Realized She's On Camera

This is the face of a girl who literally forgot she was in the middle of an interview right now.

Hutcherson never forgets. Sometimes, I feel like a facepalm his his default expression when in interviews with Lawrence. That's how you can tell that they're close.

4. When She Was The Sexiest Woman In The World

With eight marshmallows in her mouth, no less.

5. When Liam Helped Her Fit More

He thought she could fit at least 10 in there. He was almost right.

According to Lawrence, this is what he does while he thinks. It's not pretty. Unless you think everything Hutcherson does is pretty, in which case it's, at least, impressive.

7. When Amy Schumer Had A Question

Lawrence has just about the best facial expressions, OK? And Schumer's question is something that I'm sure that we have all wondered at one point or another. (No, I take it back, no one was wondering that. I would love to know the origin of that inside joke.)

I know I'm not the only one who got flashbacks to the cat meme, proving once more that Lawrence is essentially a human emoji and meme factory.