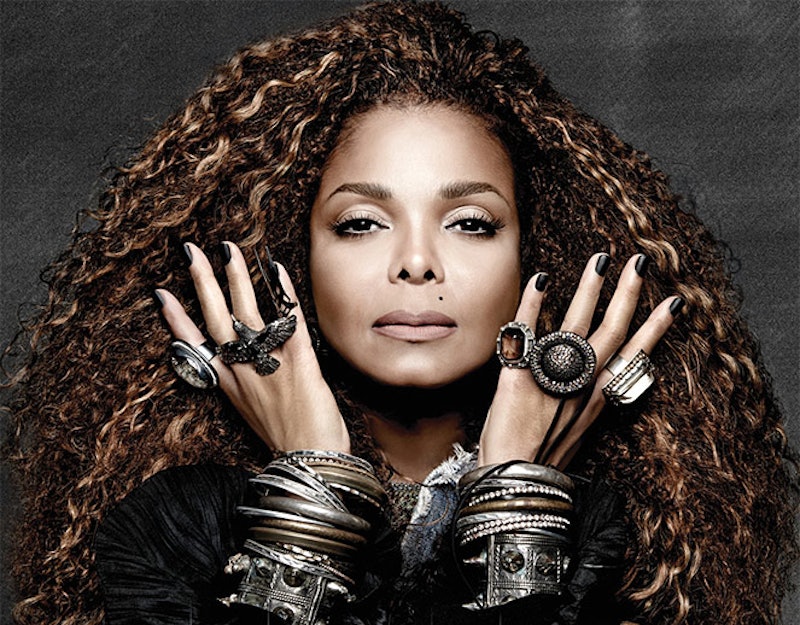 Rejoice, music lovers! On Friday, Janet Jackson dropped her new album, Unbreakable — her first full-length release in over seven years — and you need to stop whatever it is you're doing right now, put on a good pair of headphones, and check it out. Now, some people like to listen to a new album for the first time all the way through, hearing the tracks in the order the artist intended. Others (like me, for example), prefer to skip around and check out the best tunes right off the bat. If you fall into the latter camp, you may be wondering: Which Janet Jackson Unbreakable song should I listen to first? Excellent question. Fortunately, I gave the LP a listen earlier today and ranked its songs in order of awesomeness! It was a tough job, but someone had to do it.

Jackson reunited with long-time collaborators Jimmy Jam and Terry Lewis to create Unbreakable's 17 tracks, which range from modern R&B to country-pop. They're not all winners (if you ask me, the track list could've used a little editing), but if you're a big Janet fan, I think you'll find a lot to love. Here's my ranking of Unbreakable's songs, from most awesome to least awesome:

"Take Me Away's" soaring chorus is nothing short of pop perfection.

"BURNITUP!" is a massive club banger.

A great dance track with a great message.

I love the retro flourishes in "Unbreakable's" production.

Janet's voice reminds me so much of Michael's here.

Definitely the best ballad on the album.

"Night" has a pulsating electronic groove that you won't be able to resist.

"The Great Forever's" bridge is delightful.

"Dammn Baby" sounds a bit too cluttered at times, but it's still tremendously catchy.

"Black Eagle" has an almost hypnotizing quality to it.

"No Sleeep" has grown on me quite a bit since it premiered, but it still feels a little uninspired.

Listen, I'm a pop music fan, so I'm cool with cheesy... but "Gon' B Alright" is cheesy in a really dorky, really unappealing way.

Generally speaking, I think album interludes are pretty useless. Unfortunately, "Promise" didn't do anything to change my mind.

Unbreakable is available on iTunes and Spotify now. Happy listening!

More like this
Beyoncé Sent Flowers To “Masterpiece Genius” Madonna After The “BREAK MY SOUL” Remix
By Grace Wehniainen
Lauv Is No Stranger To Taylor Swift, Drake, Ed Sheeran, & Fame
By Alyssa Lapid
Who Is Camila Cabello Dating? She's Getting Cozy With Lox Club CEO Austin Kevitch
By Radhika Menon
Someone Must Pay For What Happens To Bad Bunny In 'Bullet Train'
By Arya Roshanian
Get Even More From Bustle — Sign Up For The Newsletter