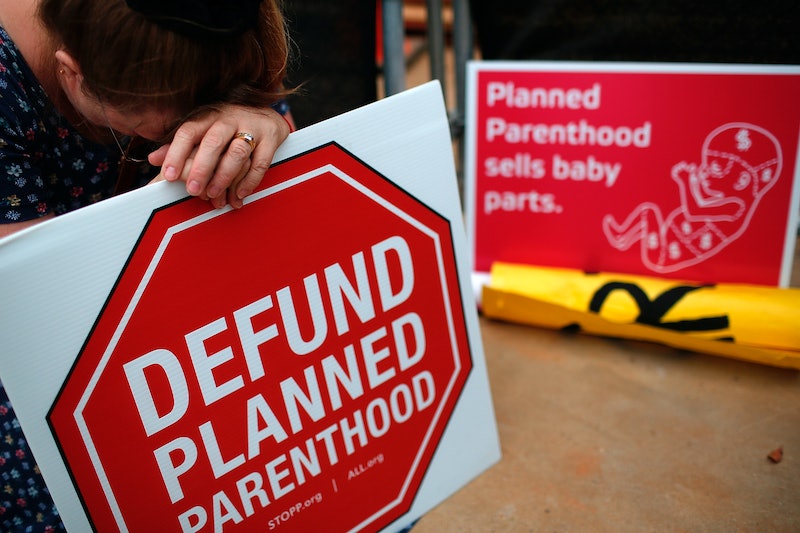 This week was an extremely eventful one for U.S. politics, but not at all in a good way. Not only is federal funding for Planned Parenthood still up in the air after House Republicans grilled President Cecile Richards in a five-hour hearing, but in Roseburg, Ore., there was yet another mass shooting where 10, including the shooter, were killed. The responses to both of these events have been varied, and the legislative climate surrounding the two topics at hand seem frustratingly off the mark and in need of change. Following the ongoing debate regarding Planned Parenthood and the tragic mass murder in Roseburg, Twitter user and writer Marissa Ross sent out the perfect tweet that describes how differently the United States handles gun violence and reproductive rights.

Ross and many others are evidently exacerbated by the way members of government want to criminalize abortion seekers and have ardently attacked Planned Parenthood, but stubbornly refuse to take meaningful action to curb today's gun violence problem. Ross' tweet notes that anti-abortion advocates on the right are quick to call health care providers and abortion seekers "murderers," but this same conservative base will react with relative indifference toward gun crimes.

Time and time again, investigations, studies, and personal anecdotes have shown that Planned Parenthood offers safe and necessary health care services. Ranging from sex education to abortion services to cancer screenings, Planned Parenthood provides services to thousands of men and women each year, yet they are constantly under threat of pulled funding due to opposition from the right.

Meanwhile, other investigations and studies have demonstrated that the gun laws in the United States are not conducive to public safety. The gun violence problem in the country is far greater than in nearly every other nation on earth, yet despite the thousands of people killed by guns in the United States each year, stricter legislation has yet to make significant progress.

While the right is quick to accuse Planned Parenthood of killing babies, it seems that the actual murder of adults or children by adult shooters is cause for less concern. Republican members of Congress have voted against federal funding for gun violence research, even though there have been more victims of mass shootings in 2015 than there have been for days so far (294 victims versus 275 days).

Ross' tweet points out the hypocrisy surrounding the vehement energy that the right pours into defunding a necessary health provider while they more or less shrug off the gun violence epidemic. Over the summer, multiple investigations were launched into investigated false claims that Planned Parenthood sells fetal tissue for profit, yet GOP members of Congress refuse to fund any studies that might help shed additional light on the problem of gun violence. Perhaps if Republicans redirected the massive efforts they expend trying to tear down Planned Parenthood towards mitigating gun crimes, we wouldn't be grappling with nearly constant devastating homicide statistics.