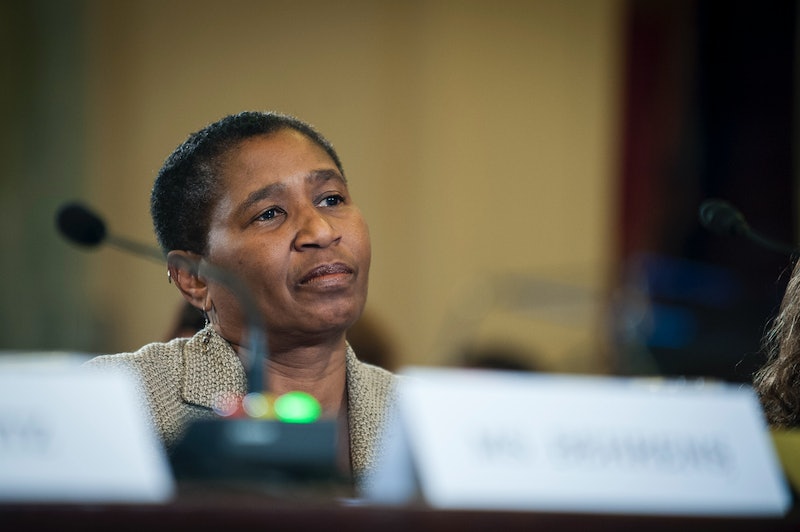 Last year, the NBA Players Association got a new executive director who wasted no time whatsoever in proving how awesome she is. And as if we needed any extra reasons to look up to her, Michele Roberts just gave an interview in Lenny that is both thought-provoking and inspirational. Seriously, if you haven't heard of this woman, you should check her out.

Roberts became the executive director of the NBA in July of 2014, replacing the much-criticized Billy Hunter. As the first woman to run a major professional sports union, she attracted a lot of attention. Roberts, though, was not intimidated by the prospect of being a trailblazer or of being a woman in a male-dominated world. A former trial lawyer who grew up in housing projects in the South Bronx, Roberts has overcome a lot of obstacles. "My past," The New York Times quotes her as saying, "is littered with the bones of men who were foolish enough to think I was someone they could sleep on."

And if that isn't enough to make you stand up and shout "Yes!", then some of her answers in her latest interview will probably do the trick. Roberts spoke to Lenny about the job (apparently, she's "having a ball"), about her past, and about always speaking her mind. Here are some of the best quotes; head on over to Cosmopolitan to read the full interview.

On Saying What She Means:

I always find it amusing when people say to me, “Wow, you actually say things. You don’t sugarcoat your answers!” Isn’t that what people are supposed to do? Why wouldn’t you give a frank answer to a legitimate question? ... I’d like to think I’ve always been candid in my responses and interactions with people, and I don’t see any reason to make the press an exception.

On Not Caring What People Think:

One of the things I discovered a long time ago was that it’s a waste of energy to spend a lot of time agonizing over how people will receive you. I’m not suggesting that you barrel through life willy-nilly, but I am suggesting that we stop trying to allow other people’s potential prejudices, let alone actual prejudices, to paralyze us.

On Her Love Of Basketball:

Basketball has sort of been a backdrop in my life as far as I can remember. It never occurred to me that at some point in my life, I’d find myself living within the basketball world. If I’d planned it, I probably would have blown it. This is going to sound very corny, but I sort of feel like this was my destiny.

On Relating To Her Players:

I’m obviously not seven feet tall, I’m obviously not a boy, and I don’t have any basketball skill, but what I do have in common with many ... of the guys is a background where if you were betting good money, you’d bet that I and they would not be successful. I grew up in the projects, I grew up on welfare. There was no reason in the world for me to think I could do anything other than get a high school diploma.

You can find the whole interview here.