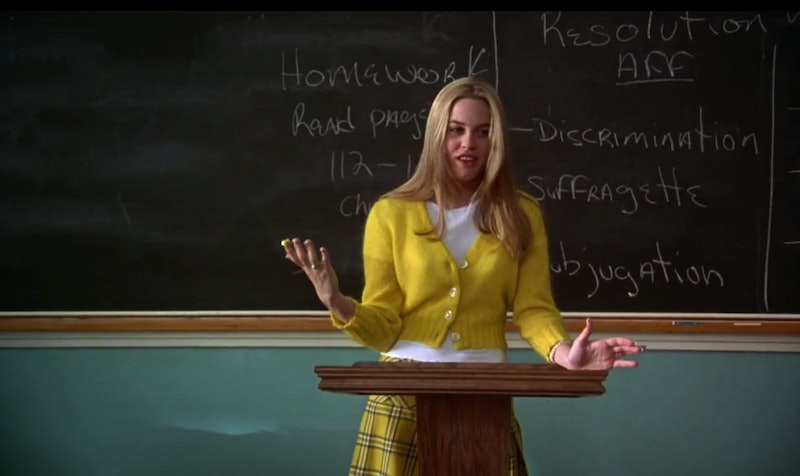 I often say that my high school was the opposite of any high school depicted on television. On TV, the jocks are the popular kids and the weirdos are usually nerdy. It’s been that way since the dawn of time. Which is what makes my high school so dang special. Our school didn’t have a football team to cheer on Friday nights. What we had was a debate team that won national titles, and ultimately prepared me for adulthood better than any sport could have.

In fact, debate was my sport. It was basically my life, too. I spent my weekends traveling with the team all over the country, my weeknights preparing for meetings by researching evidence and my prom night posing with the team for the traditional photo-up. Debate seeped into every aspect of my life and I was a better person because of it.

In college I’ve run into other debaters who have the same fond memories of going away to tournaments. We reminisce about silly arguments and crazy statements blurred out during rounds. Our experiences are shared with glee, because we can trace specific parts of our personalities back to debate. This is why I truly believe that debate is the best extracurricular activity to prepare anyone for “adulting”:

Debaters Know How To Advocate For Themselves

This one is obvious. Being a debater, meant never letting anyone get the upper hand in an argument. Parents would crack jokes about us being able to convince them of anything we set our minds to, and teachers would wave us off saying “You’re on the debate team, right?”. As adults we never struggle to clearly and concisely explain our opinions in a straightforward manner.

We Are Never Intimidated By Crowds

When you first start out in a tournament, you are debating in front of your opponent and the judges. As you progress into elimination rounds, you will have to debate in front of a crowd. By the finals, every team, coach, parent and judge will cram into the room you are debating in to watch. That is pressure. Once you have done this for four years of high school, college presentations and work meetings seem like a joke. Hey basketball, I see you, you got nothing on debate.

“Are you a master debater?”

“I guess you can say that you are a cunning linguist.”

Debaters Are Scary Efficient At Traveling

I’ve been through so many major and minor airports that even the hellscape of LAX is a breeze to me now. As an adult I know exactly what the boarding process is. I know where the best spot to sit is. I have been known to be a great travel companion because I know what the proper plane etiquette is. Bottom line, debaters know how to get traveling done.

Because most major national tournaments take place on college campuses, debaters have the chance to tour them before they know what the SAT’s are. I saw Harvard, UPenn, Emory and Yale multiples times. (I did not attend any of these esteemed universities...but a lot of my friends did #humblefriendbrag.)

Our Enunciation Skills Are On Fleek

You might be thinking, "Isn’t this covered by your arguing point, Dasha?" The answer is no. Arguing is one thing — speaking clearly is another. Why? Because you didn’t have to speed-read with a pencil in your mouth in order to convince your mother you should be allowed to go to the Blink-182 concert. That’s the debate definition of speaking clearly. As adults, our intentions are never unclear. We know what we want and exactly how to ask for it, the very first time.

Debaters Can Remember Everything

Because debate rounds are so fast paced and there are a lot of numbers and names being thrown around, the ability to remember everything is crucial. And apparently adulthood means remembering a lot of stuff, guys.

I was never the best at naturally remembering everything. My trick was to FLOW. Flowing is debate slang for note taking, and there is a tutorial online that you can watch and enjoy. This made college so easy for me.

No wonder most debaters go on to have law degrees and political careers. We are masters of persuasion. Arguing is a natural skill, but persuasion can be learned. Knowing that "one third" sounds better than "33 percent" is a gift given to me by my coach. Certain phrases are overused and should be avoided. Eye contact. Next time your friend convinces you of something, ask if they ever did debate in high school. The persuasion possibilities are endless in adulthood, when you face very important challenges like negotiating your rent or vying for the last slice of pizza every day.

Debaters Can Put Themselves In Other People's Shoes

Because the topic you debate has both a pro and a con, and only a flip of a coin decides which side you represent, as a debater you needed to see both sides to every argument. The best debaters predict arguments against their own side. This is what makes debaters the best adults. We can see an issue from both sides.

Debaters Can Smell BS A Mile Away

As John Stewart said in the final moments of his run on The Daily Show — “bullsh*t is everywhere”. Because as debaters, we manipulated so much evidence to help us win argument and spin it a certain way, debaters are really good at spotting when other people are doing it to them. (Take that, Craigslist scammers!)

Forget about speed talking, speed reading is where it's at. The ability to zone in on important information is crucial in today’s society. Blink and you missed it.

Debaters Have The Best Poker Faces

Did our opponent totally discredit our argument? Maybe. Will we let the judge know by looking up from our notepads? Never. This skill served me well when the hostess told me I already took a free sample from the tray.

Debaters Have The Best Wardrobes

The shear amount of button downs and blazers I own would make Liz Lemon proud. It also makes it hella easy to go to interviews and attend business casual events. We all looked like little professionals pretending to be adults in high school, and now it's paying off.

Debaters Have The Best Weird Stories

Your friends might have been good at track or chess or whatever, but I bet none of them had someone throw a chair out of anger during a debate round. Or how about a judge that didn’t listen to a word you said because they already picked a winner by tossing a coin at the start of the round? Or used your debate coach’s graduate paper as a source against you? Yeah, that's what I thought, non-debaters.

Debaters Are All Really Good At iPhone Games

There is a lot of time to kill between rounds and the only way to kill it is by mastering Fruit Ninja, aka the most important life skill there ever was.

Debaters Know What Research To Listen To, And What's A Load Of Hogwash

I didn’t want to take a researching class in college because I had four year of experience doing it through debate. All you do is research. I can tell a credible source from a mile away.

Debaters Are On Top Of Politics

Not only have debaters been following the national political circuit outside of the election year, but they know all about international politics as well. They need it for their bags of verbal tricks. And once they can actually use that information and the opinions they formed based on them to vote, that kind of know-how is invaluable.

In college I saw the toll that all-nighters can have on a person. Luckily I’ve been pulling them consistently over the course of four years in high school. You can alway catch up on sleep on the bus to school, anyway.

Debaters Are All About Teamwork

Your team becomes your family. Your loud, opinionated, passionate, sarcastic family. You travel, eat and laugh with the same group of people for four years. You strategize against an opponent together right before a round. You cheer your friends on when they advance into the eliminations rounds — even if you didn’t. And that’s why debaters are the best at adulting and continue to be. We know the value of teamwork.

More like this
Grenada Is The Ultimate Caribbean Hotspot For Relaxation & Adventure
By Hannah Orenstein
Noel Gallagher Joined The Nepo Baby Convo
By Darshita Goyal
Gordon Ramsay Weighed In On Brooklyn Peltz-Beckham’s “Nepo Baby” Debate
By Sophie McEvoy
Watch Kelly Clarkson Sing A Taylor Swift Breakup Song About A Toxic Relationship
By Alyssa Lapid
Get Even More From Bustle — Sign Up For The Newsletter
From hair trends to relationship advice, our daily newsletter has everything you need to sound like a person who’s on TikTok, even if you aren’t.