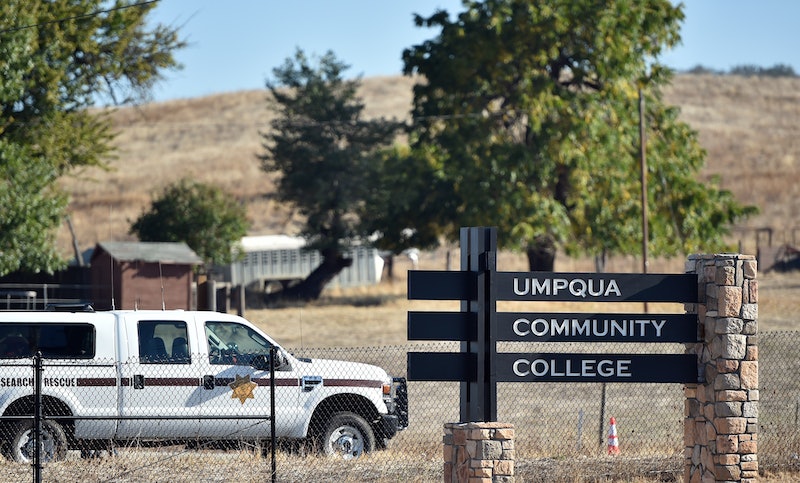 On Thursday, a gunman's attack on Umpqua Community College in Roseburg, Ore., reaped a horrible toll. Nine people were killed, and seven more sent to the hospital with serious injuries. Since then, information about the victim's identities has been trickling out, and it's a good way to pay tribute to them — don't spend your time reading up about their killer, but observe their lives and memories, instead. And on Friday, as detailed by The Oregonian, one such story came to forefront: 18-year-old Rebecka Carnes was killed in the UCC shooting, which she was attending for her freshman year.

According to the paper, the news was confirmed by Carnes' cousin Lisa Crawford, who discussed the ordeal in a Facebook post. CNN also notes that her death was confirmed by her stepfather, but that the family is not yet prepared to speak publicly about the tragedy.

As The New York Times reported prior to confirmation of Carnes' death, Carnes was planning to become a dental hygienist. She was one of two teenage freshman women who were slain in the attack, along with 19-year-old Lucero Alcaraz. There's already a way to donate to the Carnes family, if you have the money, and feel moved to offer your support — there's a GoFundMe for Carnes' funeral fund, with a target of $10,000.

Carnes was also memorialized by her cousin Bethany Johnson, in a Facebook post authored on Friday — she she spoke of Carnes' "biggest heart" and "amazing soul," and concluded that the world "couldn't handle that much good."

Speachless! [sic] Your cousins are your first bestfriends [sic] I got the pleasure of having this Amazing young lady as mine. She had the biggest heart an amazing soul. The world clearly cocouldnt [sic] handle that much good. But now your [sic] flying high with the beautiful angels and you get to be with grandma. I love you so much and am going to miss you! Rest in peace Rebecka Ann