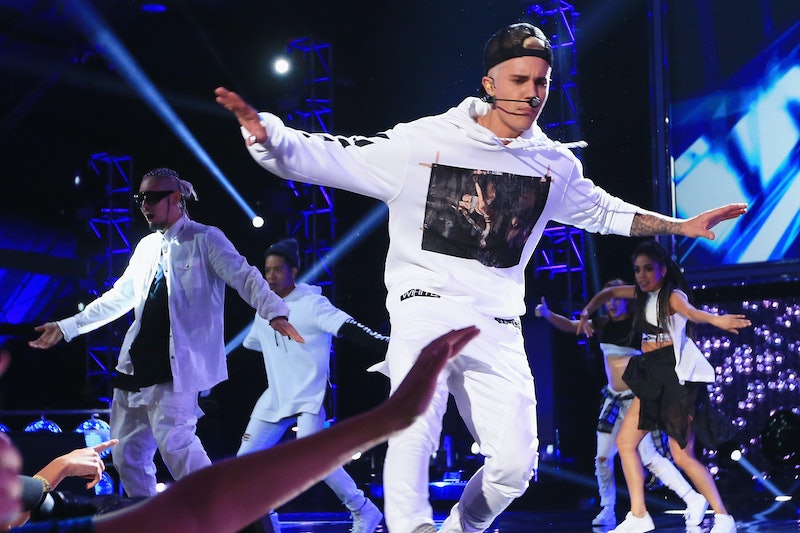 It seems like all anyone talks about anymore is Justin Bieber, and I, for one, am not complaining. Whether it's his eye-opening tell-all interview in Rolling Stone, his chart topping singles, or all the great dance covers of "What Do You Mean" hitting the Internet, it's clear that Bieber is back, and staying at the top of his game. The versions of his songs, especially, are everywhere these days; it feels like everyone is getting in on the action by posting dancing and singing covers of catchy tunes like "What Do You Mean."

Some dance covers shine brighter than others, though. When I came across this video of five cute boys gliding through a warehouse on Segways to "What Do You Mean?", my mind was blown. Did I mention that they were on Segways? Yeah, just casually. I mean, we can all do that, right? It's not like it's super impressive or anything.

If you haven't seen it yet, the video starts out with an annoyed boy checking his text messages, most likely asking his romantic interest "what do you mean?", while trying to decode her confusing signals. It then transitions to him dropping his phone in exasperation and sliding off with his squad on their Segways, making way for a totally epic dance routine that they make look all too easy. Petition to have them dance with Bieber at his next performance while he promotes his new album?

It comes as no surprise that this video has amassed over one million views in just three short days. Who wouldn't want to watch these guys skate around while doing an impressive dance routine? They aren't the only ones feeling the Bieber fever, though; YouTube is bursting with dance covers, and here is a compilation of some of the most entertaining for your viewing pleasure.

"What Do You Mean?" By Matt Steffanina

Anything that Matt Stefanina choreographs is ridiculously entertaining. This dance cover is no exception.

"What Do You Mean?" By Alvin de Castro

These dancers not only did a wicked dance cover of "What Do You Mean?", but they also decided to remix it with Ariana Grande's "One Last Time." Creativity at its finest.

"What Do You Mean?" By Brian Esperon

These talented dancers are showing that Bieber fever is still as universal as ever. This tight dance cover was filmed on the island of Guam!

"What Do You Mean?" By Ky Baldwin

OK, so I am aware that he is dancing and singing, but I couldn't help it! This little kid is adorable, and his dance routine with his own backup dancers was impressive. Mini pop-star in the making?

"What Do You Mean?" By Nahshon Taqi

Wasn't expecting to find someone dancing while playing the violin. Looks like anyone and everyone has their own spin on the song!

"What Do You Mean?" By Matt Steffanina, Feat. 11-Year-Olds

This 11-year=old boy dancing to Matt Steffanina's choreography blew me away. His facials were beyond entertaining as well. The duo at the end were on fire!

"What Do You Mean?" By Sean Lew

What exactly are these young children eating that is making them such talented dancers? Where was I when it was being passed around? This video shows yet another young kid who knows how to throw down some sick moves.

From the look of things, it appears as if Bieber will continue to ask us what we mean for more time to come. Whether people are dancing to their own choreography or making acoustic covers, everyone's hopping on the "What Do You Mean?" train. I think I will stick to singing in my shower.