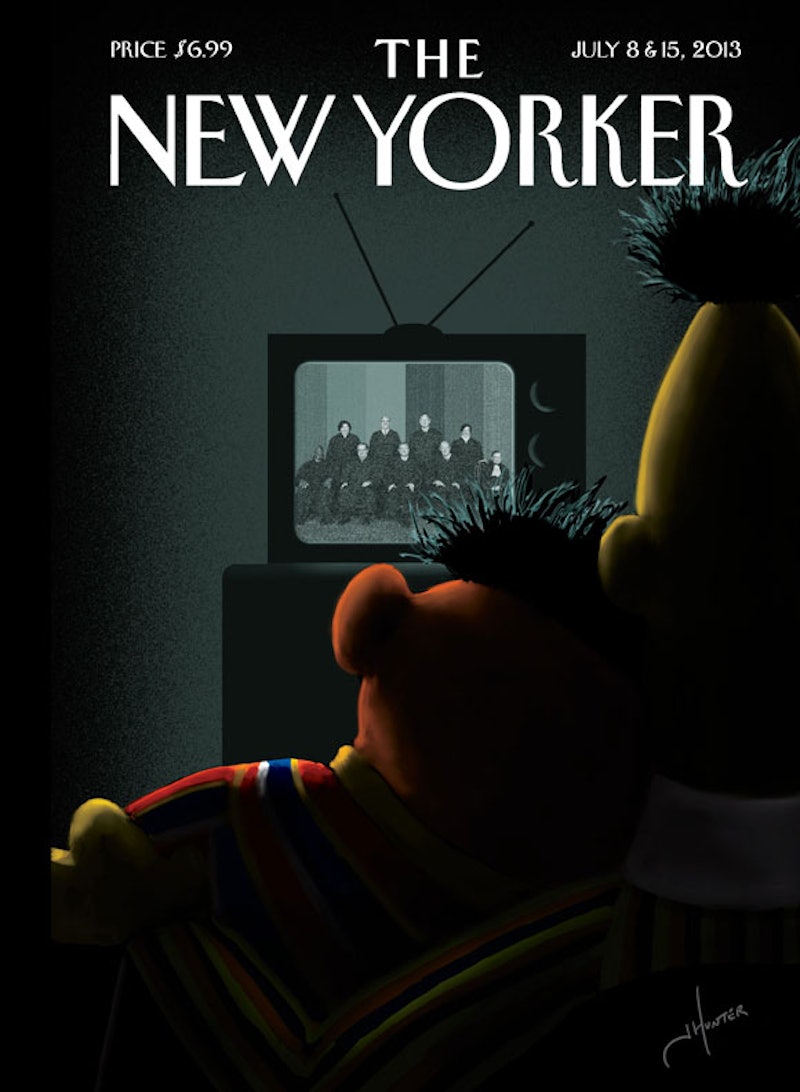 While we at Bustle love next week's New Yorker cover, some have taken issue with the magazine's choice of artwork, and they've chosen to voice their opinions on — where else? — Twitter. Below are a few of the tweets criticizing the cover for supposedly making light of a serious issue:

Flavorwire's Tyler Coates even wrote a blog post about his feelings towards the magazine's cover, calling it "homophobic" and "cheap." Says Coates, "The click-baiting, buzz-obsessed culture we live in propagates infantilism. That’s essentially what Jack Hunter, the artist behind the cover image, and the venerable magazine’s editors have done: belittling the decades-long — hell, millennia-long — fight for equal rights by needlessly sexualizing a pair of puppets."

Both Coates and the others makes an interesting point, but I have to disagree. Placing Bert and Ernie on the cover was not a manipulative or childish decision by The New Yorker. Rather, it was a sweet, symbolic choice to represent the effects of this week's victory for gay rights on Americans — and there's nothing more American than the Muppets. These puppets are not simply children's show characters; they are important cultural icons, and there's no reason they shouldn't be used to symbolize the triumphs of real people across the country.

Yet Coates disagrees. He argues, "Bert and Ernie are now apparently gay icons, at least in the eyes of The New Yorker‘s staff. And that’s a shame, because I can list off a ton of names who have done more for the marriage equality fight with level-headed dignity and pride." He's completely missing the point. The New Yorker isn't saying that Bert and Ernie are more important than Harvey Milk or Ellen DeGeneres. The magazine is merely suggesting that they are two famous characters whose sexualities has always been implied to be gay, and that they, like gay people across the country, are celebrating an important moment in their struggle for equal rights. It's simply reflecting an idea — that gay Americans are happy with the Supreme Court decisions — onto two recognizable, beloved cultural icons. What's so bad about that?

Besides, it actually makes sense for The New Yorker to use The Muppets. Pop culture is an enormous part of our society, and we're often more familiar with the characters we see every week on TV than the real people we encounter everyday. It's not exactly a new idea that the people we see on television, real or fake, are symbolic of our society. You can argue, and many have, that Walter White represents the darkness in all of us, or that Buffy Summers characterizes the struggle between duty and desire. Bert and Ernie, two of the most popular figures in television history, are no different. They represent love.