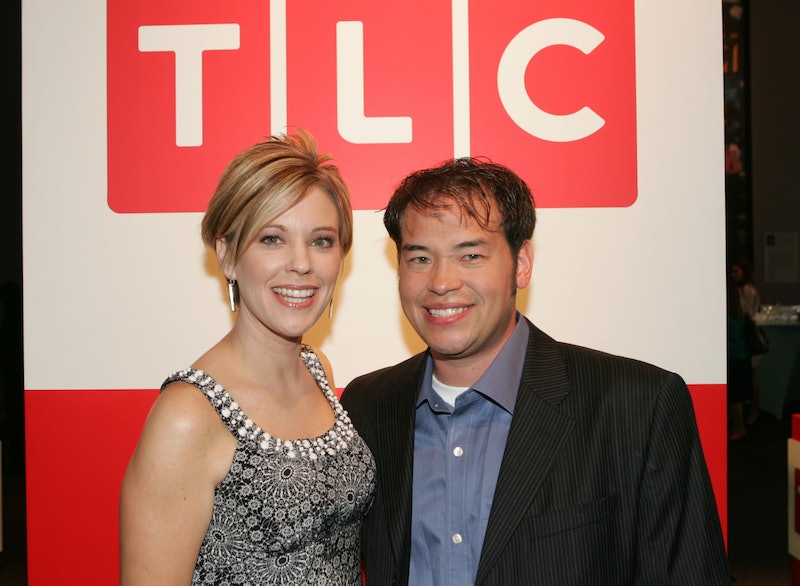 Jon Gosselin, former star of TLC's Jon & Kate Plus 8, is back in the public eye, whether we want him there or not. In a new interview with Philadelphia magazine, Gosselin let loose on his ex-wife Kate, calling her an asshole, among other things. The Gosselin crew first captured America's heart back in 2006 when TLC did a feature on the large family called "Surviving Sextuplets and Twins." In 2009, people mourned when the couple split up on national television. But though the Gosselin parents grew apart, they never fully disappeared from the nation's attention, and every few years they surface again whether through a stunt of Kate's like her time on Dancing with the Stars, or through Jon pulling a gun on the paparazzi, or, now, slamming his ex-wife for all to see.

I share something in common with the Gosselins in that my family fell apart the same time theirs did. Every Monday night I tuned in to watch the family descend deeper into divorce and I was experiencing the same things at home (except without the fun interludes of travel to exotic places like Hawaii and Australia.) It's from watching these joint divorces, both the Gosselin's and my own parents' that I've learned a few tricks of the trade. So, Jon and Kate, I hope you're listening because here are some tips from a child of divorce.

You know what's, like, super fun? Having the worst moments of your life recorded forever and ever. I still can't watch home movies where my family was a happy unit, I can't imagine having their decline recorded via national television so not only I can be reminded of the pain, but I know all of America (or at least 10 million Americans) also watched this painful moment of my life. Hooray reality TV!

2. DON'T BE NEGATIVE ABOUT YOUR SPOUSE ON A PUBLIC PLATFORM

Okay, so the divorce is done and they can't really go back and un-record that fateful episode, but Jon and Kate can quit talking bad about each other to the media. When you talk bad about a child's mother or father they get confused because they still love their parent, but now you don't and to see you say negative things about them is hurtful. It makes children think they have to take sides. "Daddy hates Mommy, and I love Daddy so does that mean I also have to hate Mommy, too?"

Jon broke this rule in a major way with his Philadelphia interview saying, "Everyone knows she’s an asshole, you know what I mean? I don’t have to—she’s proven that!” In the age of the internet, with Jon and Kate's twins now 13 and their sextuplets now 9, they have the ability to Google their parents and see what's being said. It's so not ideal to trash each other publicly. I get it if you're angry and you need to blow off steam, but I'm not sure the media's the greatest place to let that frustration show. I have some respect for Kate, as she has at least limited her comments about Jon to simple sentences like "The way he lives versus the way I live is the reason why we're divorced. Let's just leave it at that." She's even positive about her children continuing to see their father saying "I definitely want [my kids] to know that I did not want to hinder or stand in the way of that relationship with [Jon]." In the "not being negative to the media about your spouse" game, Kate is definitely winning and I hope Jon's comments were a one-time-only event. The parents need to get along at least a little bit for the children's sake. Maybe they can take a cue from their kids:

Kids learn a lot about life from watching their parents, so it's understandable that Jon would want Kate, who spends the majority of the time with his kids, to set a good example. One of those examples he wishes she would set is one of privacy. "She tweets everything. To the world, all about my children. I think it’s disgusting and awful. They can’t even have a normal life," Jon told Philidelphia. He continued saying, "Kate wants to still be on television. She’s now digging into the past, because that’s what sells. Too late, honey. No one gives a fuck, really."

And it's true, Kate is super duper into her television image. She bounced from her own reality show to Dancing with the Stars, to Celebrity Wife Swap, and has dropped hints that she'd like to be on a show like The Talk. Jon, on the other hand, has been really against television ever since his reality show ended, to the point where he doesn't even own a TV. He's been outspoken about the effect television has had on his children.

His defense for going on the show despite his attitude towards TV was "We needed the therapy for our relationship. We really couldn’t afford therapy. And it’s free therapy.” The "we" in his current relationship is him and girlfriend Liz Jannetta. I guess that was Jon and Kate's problem back in the day, they needed therapy and no shows were offering it for free. Who knows where they'd be today if only Couples Therapy had existed just a couple years earlier.

4. DON'T KEEP GUNS IN YOUR HOUSE IF YOU HAVE 8 CHILDREN AND ARE PRONE TO PULLING IT OUT WHENEVER YOU FEEL LIKE IT

When Jon pulled a gun on a paparazzi and then proceeded to fire a warning shot, the world had a lot of opinions, most of them along the lines of "no, stop, don't do that, why?" because guns in the home so often lead to accidents especially when many children occupy the home. New Yorkers Against Gun Violence sates that "guns in the home are 22 times more likely to be involved in accidental shootings, homicides, or suicide attempts." Jon maintains that "It’s your choice. Right to bear arms. Second Amendment." Which is true, but it freaked America out, and it freaked Kate out, too. TMZ claims she said she was "profoundly concerned" over Jon's itchy trigger finger so near to her kids.

You might be reading this list and be thinking that I'm too hard on Jon and too easy on Kate, but I can acknowledge Kate's mistakes too, the largest one is pretending like she's broke. We get it, 8 kids, 8 college funds, sixteen pairs of shoes––it can all add up. But you were on TV for five years and made $75,000 per episode. Are you seriously trying to tell me that the money is all gone? And if that's true, then you have some other issues you need to work out before you try to sell yourself to another television producer. In an August 2013 issue of People magazine, Kate opened up about her financial stress despite the money she's made from the show and her three books and countless appearances. "I'm living very carefully these days ... piecing and patching together [an income]," she told the magazine, also saying that going back to a job in nursing is out of the question because she would "spend everything [she] made on the babysitter."

Publicly announcing you struggle financially when we're pretty sure you don't is not only tacky, but it's frightening for your children. Especially children who might have previously thought they were financially secure for important things like college. Even if you are struggling with money, it's important to keep a brave face for the sake of your children. They've gone through enough, they don't need to think maybe you won't be able to afford dinner the next night.

6. DON'T BE OBSESSED WITH YOUR IMAGE

Between horrible Ed Hardy shirts and terrible blonde extensions, Jon and Kate have had their share of fashion don'ts, but beyond that, they've had too much of a focus on what they look like. Kate's had rumors of a number of plastic surgery procedures, Jon got hair plugs, they both got their teeth whitened. Yes, you live your life in the public eye and you want to look your best, but your children are watching and thinking that maybe they're not skinny enough, manly enough, pretty enough, when you knock yourself down and spend gobs of money improving your physical appearance. The bottom line with everything when you get divorced is that there's a magnifying glass on you now, and not just the public one. Your children had their life turned upside down and they'll be taking their cues on how to survive from everything you do. So it's important to put a brave foot forward and keep going through life the best you can so your children will learn that when life knocks you down, it's possible to stand back up and still enjoy life.