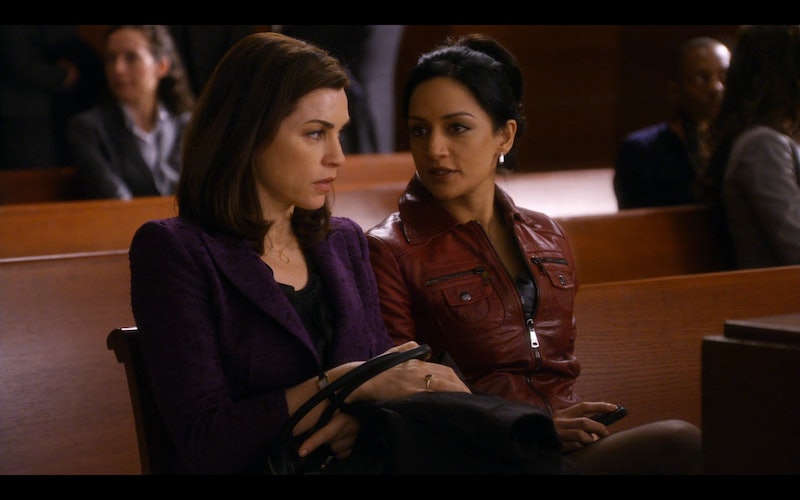 With the The Good Wife recently returned for its seventh season (praise!), the internet has been abuzz with the rumored feud between Julianna Margulies and Archie Panjabi. Panjabi is no longer on the show, but, when she was, she played the hugely popular character Kalinda Sharma, crack investigator for the firm and a legit femme fatale. Although Kalinda was a fan favorite, she was technically a supporting role to the star of the series, Julianna Margulies, who plays Alicia Florrick, the unflappable wife of the philandering Peter Florrick and moral center of the show. Because of Alicia's icy exterior, Margulies has never inspired the type of fandom that the more charismatic Kalinda did, despite Margulies' flawless, subtle acting, but the two characters (and actresses) balanced each other out well on camera, with a fluid, easy friendship.

For a while, anyway. After Kalinda and Alicia's scripted falling out over Kalinda sleeping with Peter back when the two worked together and his relationship was still solid with Alicia, viewers started noticing that things seemed frosty between the two actresses in real life, as well, sparking rumors of a feud. But what's the (rumored) truth behind their seemingly cold relationship? There are some really compelling pieces of evidence that suggest these two really are and were on the outs, and they help us figure out what their feud might be about. Here's the rundown.

Sure, you might say — Kalinda slept with Alicia's husband, and Alicia is mad about it. But the timing doesn't work out for it to be just a plot-based concern. Kalinda's relationship with Peter Florrick was revealed at the end of Season 2, which naturally devastated her relationship with Alicia, but the two had taken steps to repair it throughout Season 3, and, by Season 4, they seem to be on a good path again. But, just a few weeks later, in Season 4, Episode 14, their relationship cuts off abruptly halfway through the episode, with Kalinda and Alicia communicating about the mock trial they're planning through Cary Agos instead of directly to each other.

And from that moment on... they never appeared in a scene together again, communicating only by phone, even in the most important moments of the series, like Will Gardner's death. Once you notice it, it's really quite glaring.

The Reasoning Has Been A Little Vague

In a response to an interview that Margulies gave Huffington Post, where she called the friendship "played out" and said we wouldn't see much more of it because that would be like "going backwards instead of moving forward," creators Robert and Michelle King told the Daily Beast, "We won’t get into a public fight with Julianna on this because she knows this character almost better than anyone."

So, as The Washington Post points out, this could be taken as evidence that Margulies was a deciding force behind the demise of Alicia's friendship with Kalinda. Especially since she has been credited as a producer since its third season, even helping negotiate Josh Charles' contract and talk him into staying longer so the show could say a proper goodbye to his character Will.

The Final Scene Was Filmed In Split Screen

When Archie Panjabi finally decided to leave the show, much was made of the promise that we'd finally get the farewell we deserved, of these two characters together onscreen again. In fact, perhaps this was the reason behind their separation all along, to increase our "hunger" to see Alicia and Kalinda reunited, as Robert King phrased it to TV Guide, promising us a satisfying Season 5 finale. And, indeed, the two women did appear together at a bar, sharing a final shot and saying their goodbyes, but "appear" was about as close as it got...

...because it came out that the final scene had been filmed using split screens. It began as a conspiracy theory that Panjabi wasn't allowed to comment on, and then was confirmed by the writer at TV Line who proved they used body doubles.

Margulies Tries To Dismiss The Rumors

After the Season 7 premiere, an interview that Margulies had done about Panjabi with Vulture went live, where she pooh-poohed the rumors that she and Panjabi weren't friends ("Who says that? It's totally gossip."), and then claims that the split-screen decision was made because Panjabi was not able to be on set, "It was shot the way Robert wanted to shoot it, and the story line, too. You also have to remember, there’s difficulty … [Panjabi] was also doing another show, called The Fall. I went along with whatever Robert asked me to do and I did it happily."

...And Panjabi Is Not Having It

But here's the thing about Archie Panjabi. She's not on the show anymore, so any obligation she feels to go along with the party line and pretend nothing is going on is out the door with her contract. Once she saw Margulies' comments, she responded via her Twitter, claiming the availability issue was a fabrication:

So if it wasn't a scheduling issue, then what was it, Julianna Margulies? Ball's in your court to answer.

At the end of the day, whether this is a feud or not (and I suspect it is), there's certainly a story here of what went down between Archie Panjabi and Julianna Margulies, and the fact that Panjabi is no longer on the show gives me just the tiniest spark of hope that we might hear it one day. Fingers crossed!