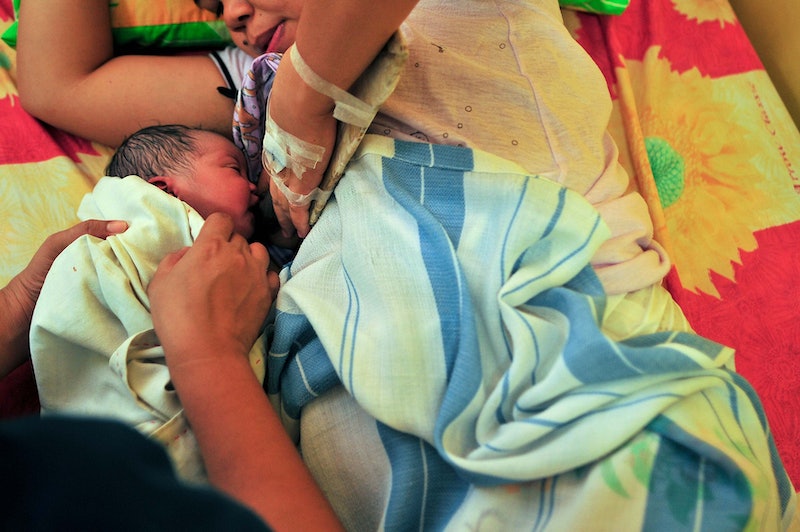 Chances are you've heard about postpartum depression before, if you haven't experienced it yourself or know someone who has. Most women become acutely aware of it sometime around their six-week postpartum checkup, when they start getting asked certain questions by their doctor. "Do you feel sadder than usual?" "Are you having trouble coping with the new baby?" But according to an article published last week in The Atlantic online, there's another common but far lesser-known postpartum condition which affects new moms: postpartum PTSD.

The article, penned by Ilana E. Strauss, asserts that women can develop PTSD following childbirth under specific circumstances — including when they undergo an emergency C-section, when their child is born prematurely and taken to the NICU, or when they perceive that their life is in imminent danger. Women with a history of childhood sexual abuse are statistically more likely to develop PTSD following a traumatic childbirth, according to Sharon Dekel, an instructor at the Harvard Medical School. Other factors, such as a woman’s individual physiology, also contribute to the likelihood of developing PTSD.

The very idea that childbirth can trigger PTSD might seem jarring at first, since most of us associate PTSD with war veterans or rape survivors. But the more you think about it, the more it makes sense: A woman's life is in danger when she gives birth, and she's simultaneously worried about the life of her child. One event, two lives. (Amphibians have it so easy with their eggs!)

When women develop postpartum PTSD, they usually experience the typical PTSD symptoms, including nightmares, flashbacks, and sensitivity to stimuli that remind them of the traumatic childbirth. One sufferer, identified only as Sarah, developed PTSD after an emergency premature delivery. She said she had to get rid of her coffee maker because the sound it made reminded her of a hospital machine, which triggered episodes.

According to Dekel, the prevalence of postpartum PTSD in the general population of childbearing women is one to three percent. Not terribly common, but not terribly rare either. So why hasn’t anybody heard of this? The Atlantic article grappled with this question, concluding:

It’s hard to say why postpartum PTSD has gone unstudied for so long, though ... stigma may have something to do with it: Mothers have kept their symptoms to themselves, and so the condition has remained largely invisible.

Stigma certainly strikes me as a real barrier to seeking help. In our culture, there’s a huge tension regarding what childbirth "should" be. Should it be natural? Should it be medical and safe? Should a woman have a hard time or an easy time?

I was not deeply surprised to find a barrage of negative sentiment in The Atlantic’s comments section. Take this particularly rough one, from a user called Bicycle Girl:

No sympathy from me. Breeding has all kinds of unpleasant side effects. Pregnancy is a completely preventable ailment and breeding certainly is not a prerequisite to being female.

Yikes. Then there was this, from a user called Laura:

I've always wondered about why some people seem to have little to no coping skills.

And this, from someone named Danielle, who at least attempted to qualify her judgments (if ever so slightly):

At the risk of sounding insensitive...really? These women are traumatized because childbirth didn't go exactly as planned?….I shudder to think about what would happen if one of these women faced a real challenge...or tragedy. Here's some advice that is very much out of fashion these days: Suck it up.

Those who don’t think childbirth is enough of a "challenge" to trigger PTSD should read Amnesty International's 2010 report about childbirth in the U.S., which included the terrifying information that between the years 2004 and 2005, the number of women who almost died in childbirth was 68,433. These situations are called “near miss” maternal injuries, and I can imagine that every single of those 68,433 women underwent a relatively traumatic experience. Yet in the U.S., childbirth is not officially recognized as an experience that can trigger PTSD. According to the Diagnostic and Statistical Manual of Mental Disorders (DSM):

Traumatic events that are experienced directly include, but are not limited to, military combat, violent personal assault (sexual assault, physical attack, robbery, mugging), being kidnapped, being taken hostage, terrorist attack, torture, incarceration as a prisoner of war or in a concentration camp, natural or manmade disasters, severe automobile accidents, or being diagnosed with a life-threatening illness.

Over in the U.K., though, their equivalent of the DSM, the National Institute of Health and Clinical Excellence (NICE) guide, does list childbirth. Indeed, PTSD following childbirth, which NICE refers to as PTSD FC, is an actual thing that psychiatrists diagnose women with. The NICE guidelines recommend that clinicians in both hospital and primary care settings monitor women for PTSD following a traumatic childbirth.

Thankfully, awareness here in the U.S. seems to be growing, if slowly, though it may be a while until the medical community more openly addresses it, as they do across the pond. In the meantime, it seems like unless you have a seriously awful American Horror Story-style birth, you're just not making the cut.

More like this
Ashton Kutcher Opens Up About His Battle With Rare Autoimmune Disorder
By Radhika Menon
Scotland's First Period Dignity Officer Is... A Man?
By Darshita Goyal
Why Experts Say Sleeping With A Fan On Isn’t Totally Risk-Free
By Sophie McEvoy
Dunkin’s Pumpkin Spice Latte Is Officially Back This Week
By Mia Mercado
Get Even More From Bustle — Sign Up For The Newsletter