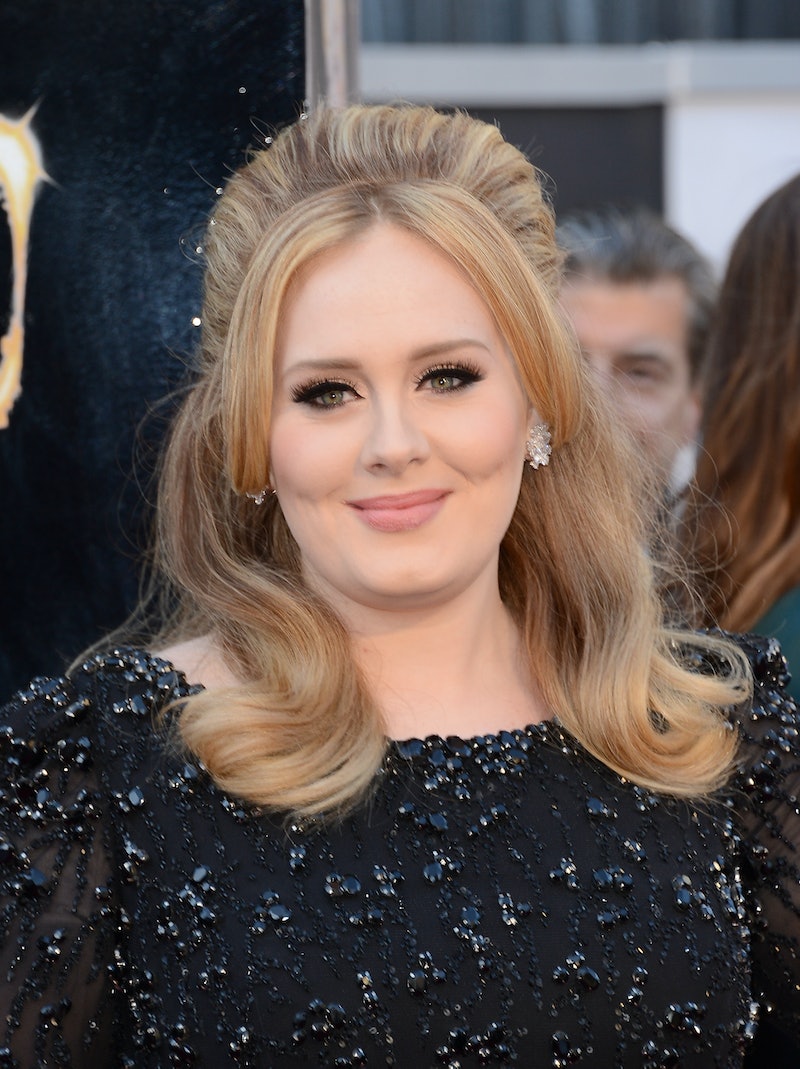 Rumors have been swirling around online for weeks now, but trusted music news website Hits Daily Double (HDD) recently reaffirmed that the release date for Adele's new album is "expected" to be Nov. 20. Yes, I know it's hard to believe, but the long-awaited follow-up to Adele's critically acclaimed, multiple Grammy Award–winning opus, 21, really could be just around the corner. According to HDD, the LP (which may or may not be called 25) will likely be preceded by a lead single sometime in early November. I don't know about you, but I can barely contain my excitement! Update: Adele confirmed on Instagram that her album is indeed coming out on Nov. 20.

So, what do we know about Adele's new album? What's it going to sound like? The 27-year-old British singer hasn't said much about the project yet, but a couple of her fellow pop stars have spilled a few (alleged) details. For example, Kelly Clarkson said in March that she heard through the grapevine that Adele's new set is "country-influenced," which sounds sort of strange at first, but I actually think it could work! Below is everything else we know about Adele's new album so far. It's time to get pumped for what could very well be one of the best releases of 2015, people!

The Album's Promo Game Will Be On Point

According to HDD, "Adele has inked a lockout deal with NBC" to promote her new album, which reportedly includes her own primetime TV special, a Today Show appearance, a Saturday Night Live appearance, and "possibly" a Tonight Show appearance. Whoa. (The deal reportedly does not prevent Adele from performing at the 2016 Grammy Awards on CBS.) Oh, and the LP will "probably" have a "wall-to-wall" Target campaign, too. In other words: Batten down the hatches and prepare for Hurricane Adele! Her total media takeover is imminent.

Billboard reports that Adele worked with several new collaborators on her forthcoming effort, including DJ/producer Danger Mouse, songwriter Tobias Jesso Jr., and, of course, the music industry's go-to Swedish hit-maker, Max Martin (Katy Perry, Britney Spears, Taylor Swift, etc.). HDD reveals that she teamed up with producers Greg Kurstin (Ellie Goulding's "Burn") and Jeff Bhasker (Kanye West's "All of the Lights"), as well. (She also wrote three songs with Australian singer-songwriter Sia, but unfortunately, they were all rejected. Sia recorded one of the tracks, "Alive," and released it on Sept. 24.)

Will these five new collaborators inspire Adele to head in a different musical direction? Or will she stick to making the unique blend of pop, soul, and R&B that worked so well for her on 21? Time will tell.

She Worked With A Few Familiar Faces, As Well

Billboard reports that Adele enlisted the help of 21 producers Paul Epworth ("Rolling in the Deep") and Ryan Tedder ("Rumor Has It") while recording her new LP. HDD notes that Grammy Award–winning musician Dan Wilson ("Someone Like You") is on board, too. Could "Someone Like You 2.0" be on its way? I'll keep my fingers crossed.

She Took A Selfie With Lady Gaga In January & I Have No Idea What It Means, But Here It Is, Anyway!

Uh, did Adele record a duet with Lady Gaga?? I suppose anything's possible. I have no idea what an Adele/Gaga collab would sound like... which is kind of exciting. Hopefully all will be revealed soon.

Rest assured, I'll be keeping an eye out for further developments.