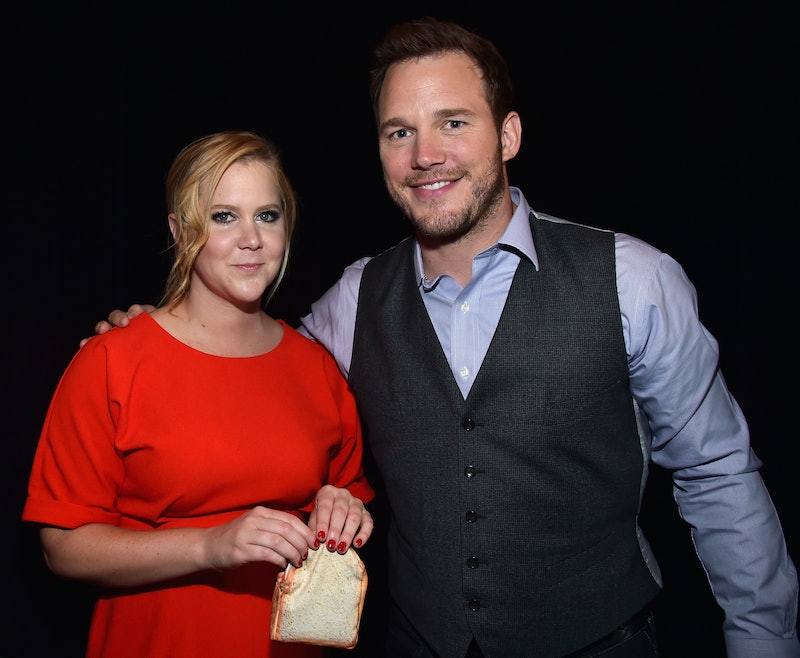 The stars aligned for those of us who love Hollywood's most hilarious actors. Good friends Amy Schumer and Jennifer Lawrence already teased us with the screenplay they're reportedly writing, but they recruited two other stars for a new project. According to E! News, Aziz Ansari and Chris Pratt joined Schumer and Lawrence for some hangout time over the weekend, and the result is nothing short of our wildest dreams.

The world became privy to what happened when the four stars hung out, thanks to videos they posted on Instagram. While Pratt and Lawrence were on a break from shooting Passengers, Ansari and Schumer happened to be in town for the Oddball Comedy Festival. The result convinced me that the men need to appear in whatever screenplay the women are writing.

Ansari posted a video of Pratt standing on a porch, looking like a stereotypical good-looking leading man. That is, he smoldered into the distance and didn't utter a word. In the meantime, Ansari quite literally swung in and out of the frame, repeating, "Hi, guys!" to the camera. The actor captioned the video "a short film. Directed by Jennifer Lawrence Director of Photography @amyschumer Written by @azizansari, @prattprattpratt, @kimcaramele, @amyschumer." Other videos from the weekend show that even when the crew wasn't working, they were hilarious. But really, did we expect anything else?

In case they need any more convincing, here are nine reasons the four should collaborate for real.

1. Ansari Can Keep Everyone On Schedule

This is NOT a bed and breakfast.

2. It Would Be An Instant Cult Classic

There's no way it could fail.

3. Even When They Aren't Trying, They're Funny

Proving that they're comedians at heart.

4. Each Actor Will Bring Something Different To The Project

So it can utilize their strengths.

5. They Can Make Fun Of Themselves

Schumer has an Emmy to her name and Lawrence has an Oscar. There's so much potential.

7. It Showcases Multiple Levels Of Talent

But if Lawrence, Pratt, and Ansari are involved, I won't complain.

9. It Would Raise The Bar For Comedy

Which means this could be the gift that keeps on giving.

Here's hoping the four stars teams up for a full-length project.

More like this
Jennifer Aniston Just Gave Courteney Cox The Biggest Endorsement
By Darshita Goyal
At 14, Tatiana Maslany Was Obsessing Over Tamagotchis & The Spice Girls
By Gabrielle Bondi
Taylor Swift Wanted To Be In 'Twilight: New Moon,' According To Its Director
By Grace Wehniainen
Jonah Hill Explains How His Anxiety Attacks Will Change The Rest Of His Career
By Grace Wehniainen
Get Even More From Bustle — Sign Up For The Newsletter