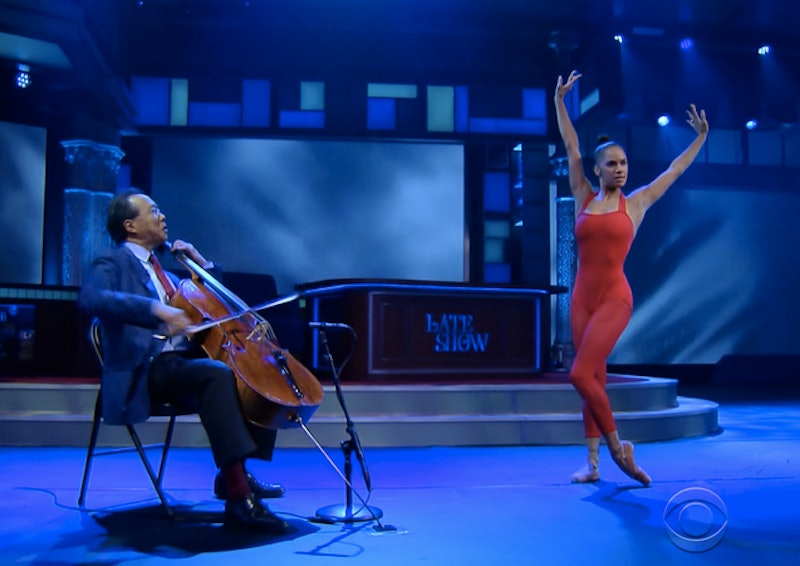 When you see someone's name trending on Twitter, more often than not something bad has happened and your first instinct is to think the worst. Late Monday evening, Yo-Yo Ma and Misty Copeland began to trend on Twitter, but thankfully, there was no need to worry. The pair actually trended after delivering a stellar performance on The Late Show With Stephen Colbert, giving hope that yes, America does indeed still have a taste for culture.

Performing to "Courante" from Bach's Cello Suite No. 2, both are living legends in their respective fields. Copeland, wearing a red leotard, danced across the Late Show stage, showing off the athleticism that garnered her the position of lead dancer in the American Ballet Theater in June, the first black female principal for the dance company. Ma, who turns 60 on Oct. 7, won a Grammy for Best Classical Performance, Instrumental Soloist Or Soloists (Without Orchestra), in 1984 for his recording of the composer's famed six compositions for cello.

The performance was a refreshing change, considering late-night is usually the setting for the radio-hit pop star or an up-and-coming rock band. Since taking the Late Show reins from David Letterman in September, Colbert has proven he has a different kind of vision for what after-hours television can be. From high topics like the Iran deal to classical pairings like Ma and Copeland, Colbert has elevated his role as late-night talk show host into a sophisticated kind of gig.

And America is digging it. Twitter loved seeing Copeland and Ma take the stage. Like, really loved it.

I can't wait to see what else classy Colbert has in store for America, and it looks like I'm not alone. Check out Ma's other performances with Jon Batiste and Stay Human.