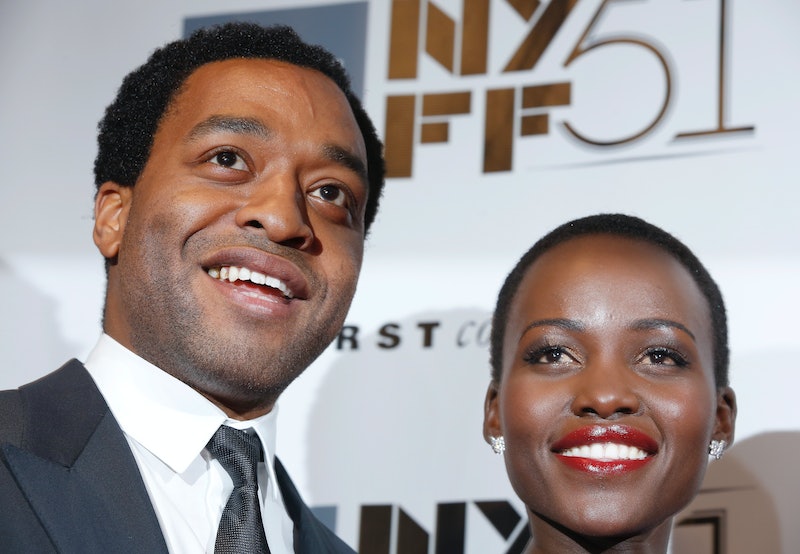 This past fall, when Claire Danes took home the award for Best Actress in a Drama at the Emmys and Kerry Washington did not end up the first ever African-American actress to win in that category, there was a sense of missed opportunity. In the day following, I sat in the living room of the family friend with whom I was staying at the time and watched as an entertainment news show discussed the slight controversy that was bubbling over the fact that, once again, the person of color did not take home the gold. "Well, isn't it about talent when it comes to who wins these things?" the woman I was staying with said. "Shouldn't their merit matter more than the color of their skin?"

Words like "diversity" and "representation" bring up a variety of emotions or defenses in people who don't spend their days treading through uses of words like "problematic" in their Facebook feed. The woman I was staying with and I — due to our generational differences and the fact that I had just recently graduated from a notoriously liberal liberal arts school — had very different Facebook feeds. And so I struggled to explain to her why, even if Claire Danes' stellar performance as CIA operative Carrie Mathison was indeed chock full of Emmy-earning merit, it did still matter.

"The thing is, there's a reason there has never been an African-American woman taking home that award," I said to her, trying my very best to suppress my Oberlin-taught urge to toss the word "hegemony" in there for good measure. "And it has nothing whatsoever to do with a lack of merit."

This year has been, for all intents and purposes, a rather stunning year in film. Talent is oozing out of every screen across the country and beyond, and, thankfully, the names attached to this talent do not solely belong to white people. In fact, some of the most effusive rave reviews of the past year have gone to Chiwetel Ejiofor and Lupita Nyong'o in 12 Years a Slave, Idris Elba in Mandela: Long Walk to Freedom, and Michael B. Jordan in Fruitvale Station (who, it should be noted, was already snubbed by the Globes). Behind the scenes, there's also Steve McQueen, who directed 12 Years a Slave and who has been fighting an uphill battle to get people to see that the film is not "just about slavery."

And, indeed, therein lies the problem with this awards season, even though it has been (rightly) heralded for its coterie of black nominees. Despite their undeniable quality, the films attracting awards hype — 12 Years a Slave, Mandela: Long Walk to Freedom, The Butler, and Fruitvale Station — all hinge on black suffering. But with the 2014 Golden Globes and 2014 Oscar nominations fast approaching, Hollywood is about to test itself once again. Who we choose for that honor says a lot about what we value — and what we expect, and from whom.

Going forward from this awards season, will the industry remain stagnant, sticking to a script that only nominates and awards African-American actors for playing roles in films that depict black suffering? Or will this years' awards slowly begin to kill those habits, resulting in an awards season that recognizes not only the work of people of color but gives way to anticipation for new roles that branch out from the archetypes?

Likely, it's unfortunately the latter. For an industry that regularly enjoys commenting on atrocities of the recent and distant past, Hollywood still finds itself heavily tied up in the racial injustices of the society in which it operates. Gabrielle Union once told Oprah Winfrey that she expected everything to change after Halle Berry won the Oscar for Monster's Ball — it didn't.

After all, how often does the industry weigh Anthony Mackie or Nicole Beharie to play roles eventually portrayed by Christian Bale or Amy Adams? It's one reason why Washington's win at the Emmys could have been so revolutionary. Olivia Pope, a political fixer in the White House, is a strong, powerful woman at the top of her game — a role that TV and audiences have finally accepted could have been played at the beginning by any actor, of any color, but who is undoubtedly best portrayed by Washington. Though this year is a favorable one for black cinema — black filmmakers and actors are seeing both critical and commercial successes in ways that are unfortunately rare for an often overwhelmingly whitewashed box office — Hollywood continues to be literally stuck in the past. And even if this year's nominees are more diverse than those in awards seasons past, they still have yet to snag any statues.

Let's remind ourselves of the realities of the world in which we still live. The Italian posters for 12 Years a Slave feature Michael Fassbender and Brad Pitt in almost godlike glory over Ejiofor's tiny figure, despite the fact that this is, undoubtedly, Ejiofor's film. It could be called "just a marketing technique," playing off the established fame of Pitt and Fassbender; it is, however, a pretty telling one.

And let's look at the facts, which should shock you, but likely won't: If McQueen is nominated and ends up winning the Oscar this year, he will be the first black person, man or woman, to win in that category. Ever. Only three black men have ever won in the category (Best Actor in a Drama) that Ejiofor and Elba are nominated in this year. Those men were Sidney Poitier, Denzel Washington, and Forest Whitaker. Only one black person has ever won Best Actress in a Drama (no women of color are nominated this year for the Globes' equivalent award) — that was Whoopi Goldberg for The Color Purple, one of the films whose representation of women of color inspired nominee Lupita Nyong'o to become an actress in the first place.

As for Nyong'o's category for the Globes — Best Actress in a Supporting Role — four black women have won in the past: Goldberg, Jennifer Hudson, Mo'Nique, and Octavia Spencer. And though Slant's R. Kurt Osenlund wrote that "there are other actors here whose work lingers like weight on your heart ... but none cut as deep as Nyong'o," the 12 Years a Slave actress's work is currently being overshadowed in the zeitgeist by American Hustle's Jennifer Lawrence, who is on a breakout spree of lovability the heights of which the other would be hard-pressed to compete with. And, once again, that has very little to do with merit — though Lawrence is undoubtedly chock full of it — and much more to do with factors of history, exposure, and mass culture's biases over what it takes to be "relatable." Nyong'o and Lawrence are two of Hollywood's best talents right now, and that should be celebrated, not embattled. But the award that night will mean very different things depending on who takes it home.

Haunting the experience of the black actor throughout awards season is not just the statistics of past winners, though. Just going against the odds? That would be far too simple. There's also that pesky thematic pattern in films like 12 Years a Slave, Mandela: Long Walk To Freedom, Fruitvale Station, and Lee Daniels' The Butler. The historical struggles of the black race are, of course, important, and not to be forgotten — especially, as is made evident not only in Fruitvale Station but in the daily news cycles, with that struggle persisting in very real, very tangible ways.

But there is a point, after so many Preciouses and The Helps take home their statues, where the consistent recognition of these types of films begins to reflect a different kind of diversity issue.

If I see another damn Slave Movie…AARRRGGHHHH!!!!! I think they keep making them because they want to keep Black Folks on edge! They don’t want us to get to comfortable! Yeah we know about Obama…But don’t forget about Toby!

They called this lady a slave, I call her my Grandmothers Grandmother. Why don’t they make movies about our African Kings & Queens? #OurHistory I would love to see a film about Akhenaton and his beautiful wife Queen Nefertiti! Or Cetewayo, a King who was a war hero. Im about to drive to my office RIGHT NOW and start the development! New Hollywood Trend, Black King and Queen films! Starring Black People!! #NoDisrespectToElizabethTaylor

The second is Michael B. Jordan, widely regarded as having broken out big this year, speaking to the questions of what roles he'd like to take on next. Here's what Vulture wrote in their profile of him back in August:

Acting is image-based; how you look will, in part, determine what roles you can play, and that’s just the nature of the business. But what Jordan seems to be speaking to with this subtle shift in how he converses about his own ambitions and the parameters of a black actor’s career is expanding the kinds of roles for which black actors can be considered. He’s asking to be relieved of the burden and relentless competition that comes from sitting in that waiting room with every other black actor in Hollywood going up for the one role in a movie or TV show (if that) written for the black guy. He’s throwing himself into the mix for parts that it might not even occur to studio suits to cast with an African-American, saying, “Hey, if Gosling and DiCaprio pass on this, why can’t you consider me?” Perhaps it’s naïve to throw himself into the conversation with those heavyweights, but at least he could be allowed the courtesy of being rejected for being too green or too sweet-looking, to be judged on some other criteria.

Both are thought-provoking alternatives to the constant circulation of black-people-suffering movies we tend to laud now. Both are perspectives we should find ourselves contemplating more often. Why don't we see more movies with, say, Jordan in a Nebraska or Her type of role? Jordan, throughout his career up to this point, was known for a string of roles that fit pretty solidly into the narrative of the black American male that we are used to seeing played out in our media: A young drug dealer in The Wire, a teenage boy with a drug addict mom and thug friends in Friday Night Lights, an alcoholic formerly homeless young man in Parenthood, and, more recently, the tragically murdered Oscar Grant III in Fruitvale Station.

Not every black actor is saddled with this brand of typecasting — Chiwetel Ejiofor, for his part, seems to have been largely immune. But it is probably the most common story, and the immense amount of talented actors and creators out there who happen to belong to the black community should not have to be relegated to stories of canonical black suffering to warrant our praise and our attention. It's time to make room for more — both in sheer numbers and in variety.

So let's hope for a not-so-distant future in which Jordan's dreams are realized, alongside those of Canon: A world in which black actors are allowed into a wide variety of projects — even (gasp!) those not written specifically for black people, and those which celebrate tribulations and triumphs past, present, future, fictional, or real.

In the end, though, we should commend these people for their talent and for their work — theirs are some of the most astounding performances of the year, and their films among the most important not just in recent years but in recent decades. If any or all of them win, we should applaud them without reservation.

As for the system that makes it so that so few black actors make it through to awards season — which is to say nothing of the experiences of every other non-white race — and that makes sure that those who do are starring as slaves or as the oh-so-brave martyrs to oppression? That's the thing we should keep our eyes on.