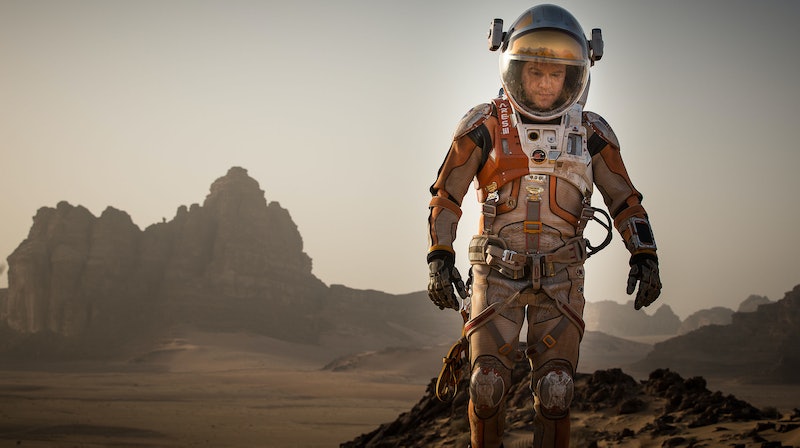 The Martian came out last week and to no one's surprise, it's totally ruling the box office. One major reason? People love movies that take place in space, because, although, we will probably never go there, we all enjoy the opportunity to watch fictional characters explore the galaxy. After all, it's why franchises like Star Wars and Star Trek are iconic pieces of cinema and staples in pop culture. As for a second reason for the film's success? It's probably that people love to see characters struggle, as long as it ends in triumph. The harder the fight, the more satisfying the payoff, and The Martian ending is a pretty satisfying conclusion to a very intense personal battle.

For those unfamiliar with the film, out now, the story follows Mark Watney (Matt Damon), who is stranded on Mars after his crew mistakenly thinks he died during a storm. They're forced to take off without him, and he is left to fend for himself in the wilds of an unknown planet. Because of his situation, Mark is forced to go into full Cast Away mode, which makes for the survival story — and thrilling challenges — that audiences love. (Spoilers ahead!)

Director Ridley Scott isn't a stranger when it comes to movies with a heavy sci-fi element, having been responsible for films like Blade Runner, Alien and Prometheus. Yet unlike The Martian, those movies leave a lot of loose ends for viewers to tie up on their own. There's a lot of complicated mythology embedded in those films that arrive in their conclusions. Audiences are forced to think about their philosophies, and the movies' end games aren't clearly drawn out. It's like homework, albeit a bit more entertaining.

The Martian is a far departure from those movies. There is a point A and a point B. It's simple and approachable. Mark is stuck on Mars and he needs to be rescued. All the metaphors and the sources of geeky debate are very minimal. In this day and age, it's very refreshing to have a stripped story like this. It doesn't leave you with a sci-fi cliffhanger that will grow into a bloated franchise. It's satisfying that The Martian ends like it does, with Mark being rescued by his crew. He went through so much crap to survive that if he didn't get rescued, there would have been a huge backlash from audiences. There would have been riots in movie theaters all across the country.

When Mark finally grasps hands with Commander Lewis and is brought on-board the space station for a happily-ever-after reunion with his crew, the audience breathes a sigh of relief. And it's doubled when, despite the book ending there, the movie gives an epilogue that is like a "where are they now?" for each member of the crew. It ultimately ends on Mark, a teacher now, lecturing aspiring astronauts about his experiences in space. It's a very "Hollywood" way to end a movie, but in this case, I totally didn't mind. It wraps everything up in a neat package — and sometimes we need that.

There have been plenty of space movies in the past couple of years, like Interstellar and Gravity, but The Martian stands on it's own. The ending of The Martian leaves you with an overwhelming sense of humanity and hope that echoes that of Apollo 13. Don't get me wrong, Interstellar and Gravity had humanity sewn into their stories, but they both heavily focused on the space elements. The special effects and the galactic scope of those movies were so intense that the human relationships were sidelined. Yet The Martian puts Mark's life front and center, and that's what I cared about. Mars and all the digital effects were cool, but decorative.

When it comes down to it, The Martian isn't really sci-fi movie, but a drama that happens to take place in space. It takes itself seriously when it needs to and has levity at the perfect moments. It leaves you with a happy and positive feeling after watching it (I dare you not to feel that way), and while its ending isn't injected with saccharine, but still manages to be feel-good and hopeful. There's enough dreary and cynical fare on TV and movies today — The Martian gives us the happy ending we deserve.