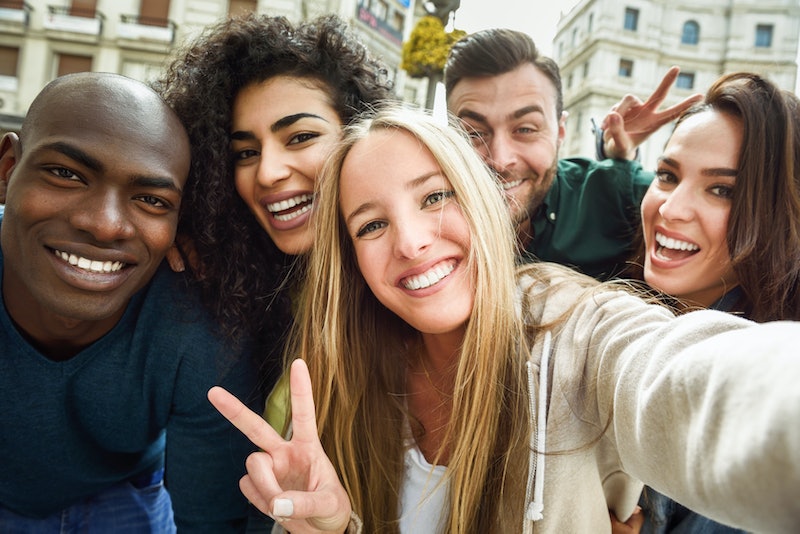 Whenever I visit my relatives back home, I always feel really excited and happy after we've spent time together — and apparently, there's a scientific reason why: It turns out that nothing, not even a phone call or Skype session, can replicate the benefits of spending time with loved ones face to face. New research published in the Journal of the American Geriatrics Society found that the best way to fend off depression was to have quality time with loved ones in person — not via some newfangled, high tech communication device. How about that?

In order to gain a better understandin of depression, researchers from the University of Michigian studied a plethora of health and social behaviors in 11,000 adults who were age 50 and older over the course of six years, between 2004 and 2010. Because this was a long, longitudinal study, the results are more meaningful than for studies that lasted for say, six weeks and used a lot fewer participants.

The research team checked in with study participants every two years in order to observe changes in their health and behavior. The major finding? Those who saw their friends or family in person three times per week at minimum were the least likely to report experiencing symptoms of depression. Only a little over six percent of people in this category reported any symptoms. Furthermore, those who only saw their loved ones once every few months or even less than that were the most likely to have depressive symptoms, with their prevalence coming in at over 12 percent, over twice that of the former group.

Lead researcher Alan Teo explained to TIME that they made sure to put controls into their study to account for elements that they felt might skew the results. “We adjusted for all sorts of things that could influence the findings, like having depressive tendencies from before,” he said. “And this is a longitudinal study that looks at people over time, not just at a single moment."

Now, this study was only conducted with older adults, rather than younger ones — but that doesn't mean that you can't also benefit from spending quality, in-person time with friends and family. Teo reasoned that these results could be applied cross-generationally, so establishing these strong connections earlier in life is a good way to ensure these bonds are strong by the time one reaches middle or old age. He called this type of behavior "preventive medicine, like getting a regular dose of vitamins."

So if it's been a while since you've connected with your loved ones, take this as your cue to schedule some face time with them in the near future — not just FaceTime. After all, your health could depend on it!