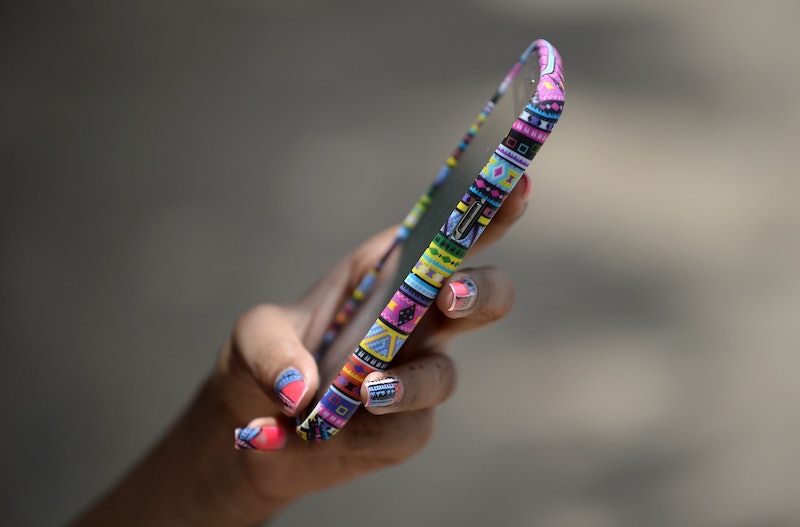 Twitter launched its newest feature, Moments, on Tuesday, and people are understandably freaking out. It's confusing at first — how exactly does it work on the app, anyway? — but once you master how to use Twitter moments, it has some pretty awesome features. Moments is perfect if you suffer from FOMO about trending news and events. Once you open the app, the Moments tab will keep you up to date with things you might have missed if you weren't monitoring Twitter or following the relevant accounts. That way, you can still catch up on, say, the best joke tweets about an awards show or the highlights of a presidential debate.

So how does Moments work? If you're using the Twitter app or visiting Twitter.com, you'll see that Moments is now a new tab option between "Notifications" and "Messages," symbolized by a lightning bolt. From there, Moments will divide its selection of what's important into categories, like news and entertainment. Moments will show you the biggest news in that category, and you'll see relevant tweets, images, videos, Vines, and GIFs based on the featured stories. The Moments feature also makes it easier to retweet posts within the Moment so that you can share the news with your followers.

You don't have to specify which topics you're interested in on Moments — if you don't do anything, you'll still see the top stories in categories like weather and entertainment. From there, you can click into the specific categories you're most interested in — the sports tab of Moments, for instance, featured stories about baseball, football, and NASCAR in Tuesday's selection. And if you want to make sure you don't miss out on lighter news stories, Moments has you covered there, too: The "fun" category features Moment stories about Corgis and hedgehogs.

If you get overwhelmed by all of the news apps in the App Store, you'll probably appreciate Moments, too. The feature pulls news from a variety of sources, including publications that range from BuzzFeed to The Washington Post. You won't have to switch back and forth between different news apps to get a better sense of the day's news. And if you're heading into an interview or meeting and want a quick catch-up of the day's talking points, scrolling through the Moments tab on the Twitter app will be much easier than sorting through your entire Twitter feed.

The best part of Moments, though, might be the ease of following each Moment you're interested in in real time. When a new tweet is added to a Moment, a blue dot will appear in the top right corner of the Moment's featured image, so you'll know there's new content if you're interested. And for Moments that are rapidly updated, such as breaking news stories, you can follow the Moment, which will add relevant tweets into your timeline, even if you don't follow the relevant accounts, until the Moment is over.

More like this
Why TikTok Is Flooded With Controversial Videos About "Pick Me Girls"
By Courtney Young
Camilla Paid Tribute To The Queen In A Heartfelt Video Message
By El Hunt and Sam Ramsden
The 8 Best Headphones For Pelotons
By Megan Gray
26 Ghost Story Podcasts To Get You Ready For Halloween
By Jessica Booth, Mia Mercado, JR Thorpe and Emma Carey
Get Even More From Bustle — Sign Up For The Newsletter