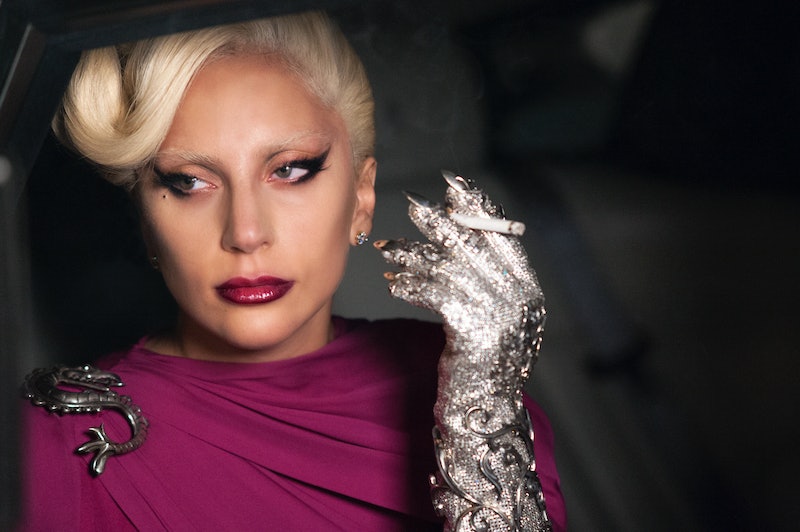 If you've been eagerly devouring ever bit of news about American Horror Story: Hotel, then you probably know that Lady Gaga's AHS: Hotel character has a taste for blood. But, even though it's her beverage of choice, that doesn't mean Gaga's character Countess Elizabeth is a vampire. I mean, according to Ryan Murphy, that is. “I prefer the term ‘ancient blood virus,'” the show's creator told Entertainment Weekly. “It’s not vampires. It’s really a form of hemophilia in a way. There’s no capes and fangs.”

That seems fitting for Gaga's character, and it's understandable that Murphy might have mixed up the two similar-sounding words. But, as much as he wants to deny the vampire label, it would make sense for Gaga's character to be one. After all, another name for Hematolagnia is Clinical Vampirism. Plus, it's worth noting that the real Countess Elizabeth Bathory, a serial killer on which Gaga's Countess Elizabeth seems to be based, is best known her vampire-like ways of allegedly bathing in the blood of virgins to stay young. (She was even called Countess Dracula by many.)

Also, her character is described by a "show insider" as being "the mother of 10 identical vampires who are eight years old." I mean, if she's not a vampire, how does she have 10 vampire children? Maybe Gaga isn't a vampire in the traditional fangs-and-cape sense, but she definitely has some vampiric tendencies. And, either way, she's insanely creepy.

More like this
Jennifer Coolidge Hunted For Jewels & Lashes In J.Lo’s Hotel Room
By Jake Viswanath
The Plane Crash In 'Dear Edward' Is Based On A 2010 Tragedy
By Grace Wehniainen
This 'One Tree Hill' Wardrobe Error Is Going Viral On TikTok
By Brad Witter
Keyla Monterroso Mejia Is Finally The Star Of The Show
By Gabrielle Bondi
Get Even More From Bustle — Sign Up For The Newsletter
From hair trends to relationship advice, our daily newsletter has everything you need to sound like a person who’s on TikTok, even if you aren’t.