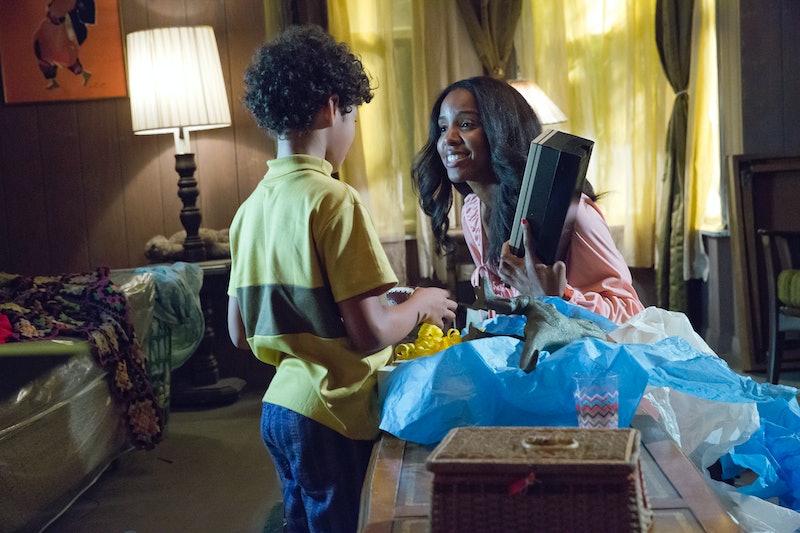 Throughout the first season of Empire, Andre struggled with his bipolar disorder and it seems that Season 2 is providing more depth not only into his life, but his relationship with his father. After Cookie, Hakeem, Anika, and Andre's hostile takeover of Empire fails miserably, Andre tries his hardest to continue working with Cookie to create and grow the new Lyon Dynasty. But one thing is obvious: Andre wants nothing more than to just go back to Empire, where he feels he belongs. Unfortunately, even crawling back on his hands and knees won't convince Lucious to give him his job back. In fact, Lucious continues to not only "forgive" Andre for his hostile takeover mistake, but also judge him for his religious beliefs and continuously put him down. It's always been a mystery as to why Lucious treats his oldest son this way, but finally in Wednesday night's episode we get some major hints. It turns out Lucious' mother might have had a mental illness, and now Lucious can't separate that history from his son's experiences.

This is totally unfair of Lucious. While the flashbacks make it clear that his own childhood was very tumultuous and it would make sense that he is still dealing with its effects, he shouldn't be projecting those feelings onto Andre — especially since he's dedicated his life to Empire. Even after Andre is kicked out, he still tries to give Lucious ideas on how to expand the company, but Lucious won't allow these smart decisions be a ticket back in. Instead, Lucious uses Andre's plans without him, hurting Lyon Dynasty in the process.

We only get flashes of Lucious' mother on Empire, but it appears that she was dealing with a mental illness as well. One particular flashback shows her coming home with bags and bags of presents for him, not realizing that it wasn't his birthday, having spent the only money they had to buy groceries. Clearly Lucious is still struggling with these childhood experiences, but that shouldn't stop him from supporting his son when he needs it the most.

Lucious is allowing Andre to fall apart right in front of his eyes. Coming back to Empire could have been the boost Andre needed to get back on his feet, especially given that he will soon become a father. But instead, he's falling further and further as he continues to debase himself just for his father's approval. Andre has already shown that he's made strides in coping with his bipolar disorder, and seems to be much healthier than he was at the end of Season 1. Unfortunately, that effort means nothing to Lucious. It's heartbreaking to see Andre be broken down and hurt by an unsupportive father, and struggle to find a way to succeed on his own.

According to promos for Season 2 of Empire like the one below, Andre will continue to try and gain his father's respect. He asks Lucious if he can return to Empire to "make this mess go away" and Lucious says he'll give Andre anything if he does that. Then the clip cuts to Andre picking up a shovel.

Would Andre go so far as to dig up Vernon to show his father that the DA has no murder case against him, incriminating himself and Rhonda in the process? Being around Lucious is quickly becoming a dangerous environment for Andre, and I'm very nervous about where Empire Season 2 will take him.