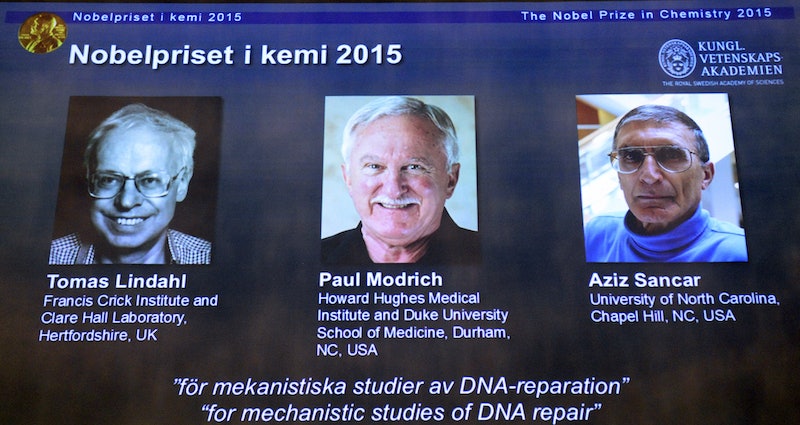 The winners keep on coming. On Wednesday, Tomas Lindahl, Paul Modrich, and Aziz Sancar won the Nobel Prize in Chemistry for mapping out how cells repair DNA. In the Stockholm, Sweden, news conference, the Nobel Prize committee explained the significance of their work, saying the winners "provided fundamental knowledge of how a living cell functions and is, for instance, used for the development of new cancer treatments." The three will share a prize of 8 million Swedish kronor, or approximately $970,000.

During the 1970s, Lindahl, a Swedish citizen, showed how quickly DNA, previously thought as extremely stable, decayed, which led to the discovery of the extreme means to which molecules counteract DNA's collapse. Turkish-born American Sancar demonstrated how cells repair UV damage to DNA during nucleotide excision repair. Modrich of the United States researched DNA mismatch repair, the process in which cells correct errors that result during DNA replication. (Fun fact: the United States has previously dominated the chemistry round, with at least one American laureate in 18 of the last 20 years.)

According to The New York Times, the chemistry prize had evolved to award more novel imaginings — like glowing molecules or uber-powerful microscopes — but Wednesday's announcement appeared to return the prize to more traditional research.

Here's a more detailed breakdown of the three men's contributions.

More like this
Read Dan Levy's Heartbreaking Message After The Club Q Shooting
By Stephanie Topacio Long
Iran Has Issued A Death Sentence Over Mahsa Amini Protests
By Catharina Cheung, Darshita Goyal and Maxine Harrison
Kate Middleton & Prince William Were Booed & Mocked On Their U.S. Visit
By Jake Viswanath
Here's The Role Lady Susan Hussey Played At Buckingham Palace
By El Hunt
Get Even More From Bustle — Sign Up For The Newsletter