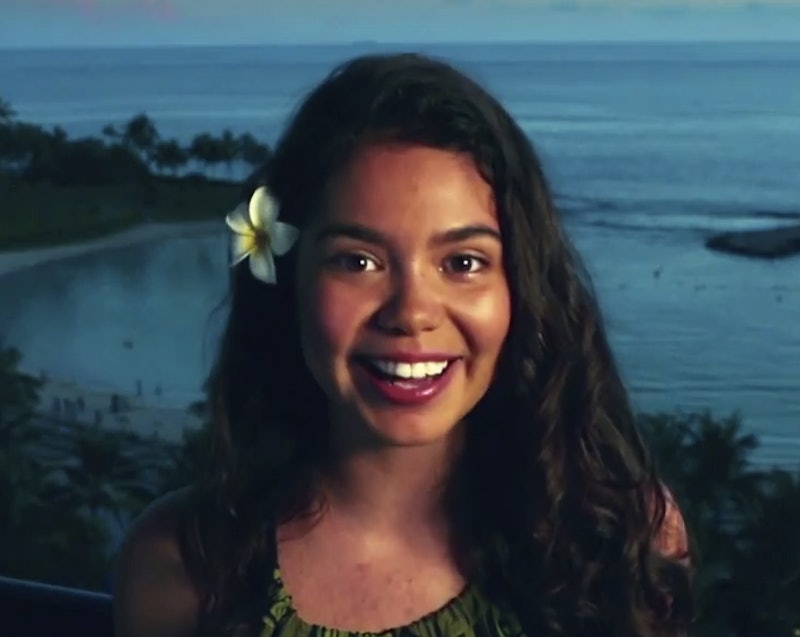 The world could use another "badass" Disney princess who has a little more in common with Mulan and Pocahontas than some others who are lovely to look at but who don't do much (and whose names I won't mention out of respect). And fans are getting something even better than they hoped: 14-year-old Auli'i Cravalho has been cast as Moana, a South Pacific princess who lived 2,000 years ago and bravely sets sail for a new adventure, where she encounters a demigod named Maui, played by Dwayne Johnson. Disney casting directors deserve big hugs for this totally winning casting choice.

There are countless reasons why this is awesome news, but let's start with two: Cravalho is actually from Oahu, Hawaii. And she's just 14 — meaning teens and children can consider an actual peer their newest princess idol (no disrespect toward Idina Menzel or Kristen Bell, of course). Allow me to throw in a third reason for good measure: the high school freshman is such a Hollywood newbie, she doesn't even have an IMDB page as of right this second, though you can expect that to change momentarily. In other words: yeah, she may not be a real princess, but she's the closest thing you'll get to the real deal, mainly because she's not a seasoned Hollywood pro.

It doesn't hurt that she also seems super sweet and humbled by this experience. In an interview with PEOPLE, the teen said she never imagined she'd score the role because hers was just one of many "great" Moana submissions over YouTube.

"From baby time to now, I wanted to be a Disney princess and then I wanted to be a singer or an actress," Cravalho told the publication. "Moana is such an amazing character. She’s brave, she is so empowered, she knows what she wants and she’s not afraid to get it, and I think that’s something that I can relate to as well. I just love watching how she goes along in this wonderful movie and grows as a person and helps her culture along the way."

How cute and talented is she?!

She doesn't have an Instagram. And she pretty much just set up a Twitter account, where she has fewer than 230 followers (again, expect that number to shoot up by the end of the day). But her first-ever tweet was one that proved her gratitude:

The soprano, who is in her school's glee club, will be directed by Ron Clemens and John Musker, who were responsible for the big screen adaptations of Aladdin and The Little Mermaid, so she's in good hands. Here's hoping this is the beginning of a long, incredible career for the teen. Starting off as a Disney princess? Not too shabby.

Moana is scheduled to be released on November 23, 2016 — which gives me enough time to buy up every Moana action figure in the store and hope my four-year-old chooses her over (cough) other beloved princesses who shall remain nameless.