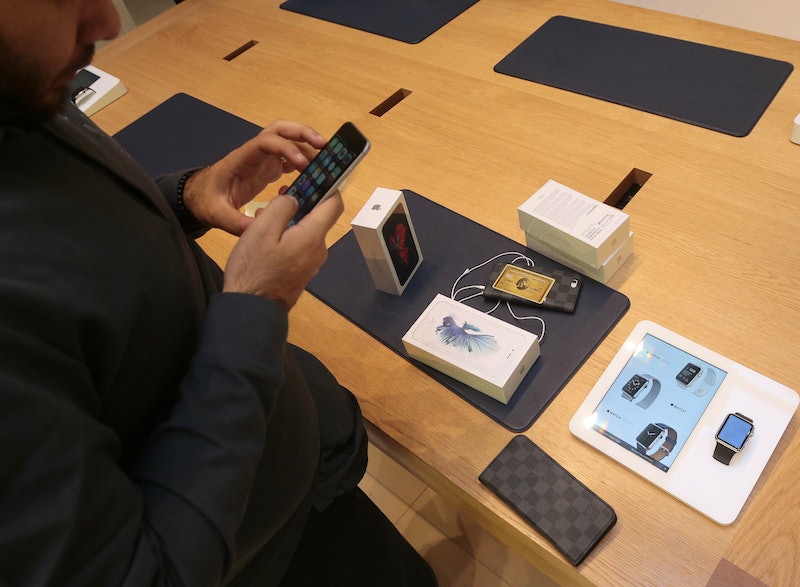 The iPhone 6S and 6S Plus both came out Sept. 25 in the U.S., parts of the U.K., and Australia, but people have been able to pre-order them for at least a week prior to the release. As is tradition, Apple let iPhone purchasers line up outside its stores on launch day, and some crowds across the U.S. and Canada waited for hours. If you've finally got your iPhone in hand, you know that the next step is to make sure it's appropriately decorated. And what better way to decorate your new phone than with a brilliant feminist case? Thankfully, even though there's a shortage of the new rose gold iPhone 6S and 6S Plus, there's no shortage of feminist iPhone 6S cases.

Recent estimates show that women make about 78 cents to the dollar that men make, and women aren't estimated to reach pay equity with men until 2059. Combine that fact with the well-researched evidence from the Centers for Disease Control (among other surveys) that one in five women experience rape at some point in their lives, and you've got more than enough evidence that the movement for gender equality — socially, sexually, economically, and politically — is a pretty damn necessary one. Women and men should be shouting their support for feminism in any way that they can, so having a feminist iPhone 6S case would only be another great way to show that you stand for women. Here are 16 badass feminist cases, because Beyoncé taught us who runs the world.

This Rosie the Riveter case from Zazzle is the perfect way to remind people just how long this movement has been going on, and that it's not going to stop anytime soon.

This Case Is Perfect For Sticking It To The Man

This case, also from Zazzle, features an awesome feminist symbol, originating in a type of feminism that sees patriarchy as the toxic ingredient in many forms of class separation and domination. Um, we like all of our lattes patriarchy-free, thanks.

Watch out, not-very-radical- and scientifically-supported idea coming through!

This case reinforces the feminist notion that no woman — even a woman who's in a relationship — is the property or possession of someone. Women should strive to be somebody on their own instead of the trophy for someone they care about.

A Subtle Case Lets The Movement's Importance Speak For Itself

This case might look pretty and sleek, but it's shock resistance and super tough — now there's a cheese but perfect metaphor for you.

Because Feminism Is For All Genders

This case shows that feminism is a cause that champions equality for all people. It wants to rid men, women, non-binary people, and everyone in between of the gender roles that pressure them to fit into boxes that might not actually represent who they truly are. I mean, really, everyone prefers cinnamon rolls.

Women Are More Than Just Some Painter's Or Songwriter's Muse

Sexualizing women in lyrics or painting them as archetypes of beauty and poise is so outdated.

#YesAllWomen was started so that women could share their personal experiences of misogyny and violence without being told "You asked for it" or "What could you have done to prevent it?" Listening to the the survivors of violence is crucial to the movement.

Crush Misogyny With This Customizable Case

Our feet are not dainty!

This case shows that feminism accepts anyone who is affected by gender or class-specific inequality and violence. You don't have to be assigned female at birth to be a feminist.

This Case Is For You If You're Tired Of Street Harassment

Or even if you're tired of all men thinking they can give you a pet name because you're a woman. It's creepy.

Feminism Isn't About Giving Up Motherhood

This case is awesomely clear: You can be a mother and still be a feminist. (Even though the movement doesn't indicate that the two are mutually exclusive.)

The Perfect Case For The Feminist Cat Lover

This case is also transparent, so you can show off your iPhone 6S if you got the new, fancy rose gold color. It's almost too purr-fect. Find it at Casetify.

For The Artsy Feminist

The graffiti style of this Society6 case makes it loud and clear in a unique way.

This Case Helps You Get Specific With Your Feminism

'Cause Karl Marx was really onto something with the whole power and capital thing.

And This Case Tells Us What We Knew All Along

A woman's place is where ever she wants it to be.

More like this
Amanda Gorman Shared A Powerful Message On Meghan Markle’s Penultimate Podcast
By Darshita Goyal
MOBO Awards Found Kanya King On The Woman Whose Grit & Determination Spur Her On
By Kanya King
The David Beckham Qatar Controversy, Explained
By Sophie McEvoy
Here's How To Support Jewish People Amid Rising Antisemitism
By Hannah Orenstein
Get Even More From Bustle — Sign Up For The Newsletter