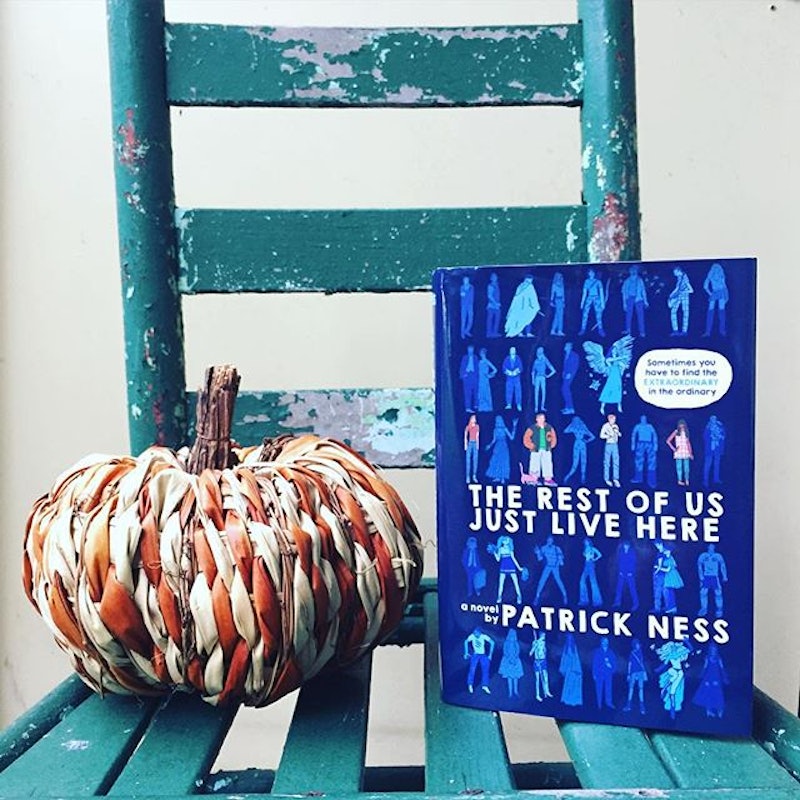 Everyone knows YA's stars: Katniss Everdeen, Tris Prior, Harry Potter, Bella Swan, and others who seem to continually save the world. But what about, well, everyone else? Patrick Ness' The Rest of Us Just Live Here is an ode to all of the ordinary teenagers living in a Chosen Ones world. Turns out, we "normal" people may not get the spotlight, but we're just as extraordinary as the apocalypse-halting superstars.

The Rest of Us Just Live Here is a clever, hilarious book, to be sure, but it also has the heart and engaging characters to rise it above just a satire or parody of Chosen One YA narratives. The novel is cleverly constructed where the Chosen Ones, dubbed "the indies" by the characters in Ness' book, get their story told — but it is falls to the background of the ordinary high schoolers' stories. Each chapter begins with a brief blurb about what's happening in the indies' world. For example, here's the opening paragraph to The Rest of Us Just Live Here:

CHAPTER THE FIRST, in which the Messenger of the Immortals arrives in a surprising shape, looking for a permanent Vessell; and after being chased by her through the woods, indie kid Finn meets his final fate.

But Finn doesn't actually appear in the chapter until the end, and when he does, he's just someone running by the ordinary high schoolers, who remark, essentially, what are these indie kids up to now? Instead, readers get hilarious transitions from what the indie kids are doing to what our main characters are doing, which is usually homework and stressing about prom.

The book's "real" story centers on Mikey, his sister Mel, his best friend Jared, his crush Henna, and his kid sister Meredith. And more than anything, Ness ensures that they get to tell their story from their perspective, how they want to tell it. There are tough things that have happened in the past and are still happening in the present — Mikey suffers from OCD, Mel nearly died of an eating disorder, and everyone seems to struggle with family issues — but this is not an "issues" book. Ness knows it, and so do his characters. As Mikey says after relaying the troubles in his family:

But all of this, this isn't the story I'm trying to tell. This is all past. This is the part of your life where it gets taken over by other people's stories and there's nothing you can do about it except hold on tight and hope you're still alive at the end to take up your own story again. So that's what we did. Me, Mel, and Meredith all moved on and we're the stories we're living now.

Just remember, please, most of that stuff is in the past. It isn't the story I want to tell. At all. You need to know it, but for the rest of this, I'm choosing my own story. Because if you can't do that, you might as well just give up.

These are the characters who are collateral damage to the goings on in Chosen One narratives, and they are tired of it. They don't want Ness' book to be about their OCD or their eating disorder; they want more than to be a "message." And Ness is allowing his characters to write the book they want and deserve. As so, it's about friendship, family, changing and growing up, and finding yourself in a (sometimes immensely so) complicated world. And maybe, as The Rest of Us Just Live Here, shows, being the Chosen One is far more "normal" than just trying to exist as no one special in the world.

And, as much as the novel is about these characters, it also knows how to have some fun, too. You'll love how it (lovingly, always) snarks on these seven common tropes from YA's Chosen One narratives that we see a lot of today:

Ahh insta-love. You remember in high school when you fell in love at first, magical sight with someone before you even spoke and you risked everything for each other against all common sense and now you're still living happily ever after in a country home in the middle of nowhere with 2.5 kids and white picket fence? Oh, you don't? Neither do Ness' characters. Here's what Mel thinks when Henna starts to say she's falling for the new kid at school (more on that later).

You always have a choice. I don't care if you think it's love — and by the way, NOT a word you should throw around so easily — but even if that, even if that word, you can still choose to act right.

From Romeo and Juliet to Edward and Bella, insta-love has populated literature, but Mel is doing her darnedest to ensure she's not in one of those stories.

Maybe you can name your child Apple if you're Gwyneth Paltrow, but in The Rest of Us Just Live Here everyone knows that the out-there names are signs of indie kids, just like the girls Katniss, Tris, America from The Selection series, Hermione, and Reneesme (don't get me started), and the boys Peeta, Four (nickname, but still), Cricket from Lola and the Boy Next Door, and major influx of the name Wren which has taken over so many YA novels recently. This exchange happens between Mel, Henna, and Mikey:

"Which Finn?" my sister says. "Aren't all the indie kids called Finn?""I think there are a couple of Dylans," Henna says, "and a Nash.""There are two Satchels, I know that," I say. "A boy Satchel and a girl Satchel."

But before you jump on Ness and say, wait, Henna isn't exactly a commonplace name, he has a reason for you: Her dad is foreign, and in Finland it is not an indie kid name. In reality, Ness auctioned off a chance for a fan's name to appear in the book and the winner was named "Henna Silvennoinen," so there.

Remember a few odd years ago when all YA readers fell in love with vampires and couldn't get enough of them? Ness' characters do too. When they relay all the weird things that happens around the indie kids, this event comes up:

And don't even get me started on when the indie kids fell in love with and then defeated all the vampires a few years back. Henna's older brother Teemu got mixed up with them and pretty much vanished one day.

4. The New Kid In School

In YA, there's often a new kid in school and there's something juuuust a little off about him. When Henna's new crush Nathan transfers to their school, Mikey is concerned:

"What kind of guy transfers to a new school five weeks before the end of his senior year?"

What kind of guy, indeed.

For some reason in fiction, the death-bringing super villains and the apocalypse always seems to originate in sleepy towns in the middle of nowhere, not in LA or New York. So when everyone is questioning what's with all the strange happening in their own personal sleepy town, Jared is the first to realize what's up:

"I doubt the end of the world would start with our town," Jared says. "Though maybe it would, actually."

What have all of YA's teenagers been doing in their lives that the adults never seem to believe them when they say weird things are happening? Ness' characters know that the adults have all witnessed zombies, vampires, and all kinds of trendy apocalyptic events via the indie kids, and yet as each new generation grows up to be teenagers, the adults magically forget what it was like to live through it. Mikey wonders about this phenomenon:

There are two more dead indie kids. I didn't really know either of them, except to see them in the hallway at school, but still. "This is worse than when they were all dying beautifully of cancer," Henna said.

Ness cleverly sets up one of his indie characters at the beginning of Chapter 2 in this way:

CHAPTER THE SECOND, in which indie kid Satchel writes a poem, and her mom and dad give her loving space to just feel what she needs to.

Much later in the novel, Ness shouts-out a call back when Mel reports back after asking indie kids what's going on in their hometown:

"What'd they say?" Jared asks Mel over lunch."That we wouldn't understand," Mel says frowning like she's about to fire the world from a job it loves. "But one of them showed me a poem about how we're all essentially alone."

Chosen Ones = the original hipsters.

Sparkly vampires, revenge-hungry aliens, evil futuristic corporations — no matter the Big Bad, as Buffy would say, the Chosen Ones will always save the day, and the world. The indie kids don't know that, in Ness' story, but the ordinary kids do, so they don't stress too much over all these crazy occurrences. When it comes to light that all of these weird things are adding up to the beginning of the end, this exchange happens:

He shrugs. "However it's going to be solved. However the indie kids are going to solve it.""If they solve it.""They always have."

End of the world casual.

Ness's story couldn't exist without Chosen One narratives, and the heart Ness puts into his story shows that he knows that. But he also knows that not everyone is, or has to be, the Chosen One. And the ordinary people's stories — who don't save the world, who don't have magic, who don't fall insanely in love at 17, who don't die beautifully of cancer — deserve to be told in spite of, and even because of, that.