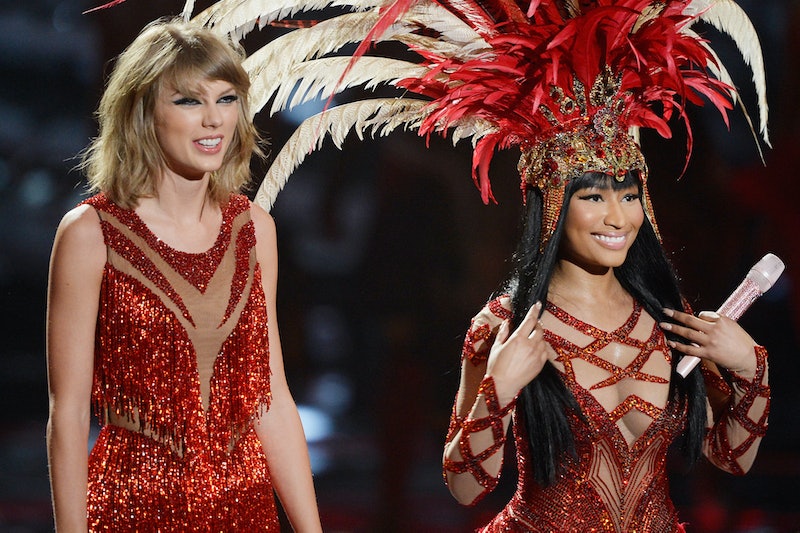 Back in July, Twitter was once again at the center of a serious misunderstanding, this time between Nicki Minaj and Taylor Swift. As you'll probably remember, Minaj expressed her disappointment over the lack of a "Video of the Year" nomination at the MTV Video Music Awards for "Anaconda", despite how phenomenally well the video had done and how many millions of views it had garnered. Minaj's point that women of color are often ignored for the very things which white celebrities are lauded for (despite those things often originating from black culture) was a valid one, but one that Taylor Swift — who was nominated — took personally. The resulting Twitter back and forth between the two was messy, but was eventually resolved in a way that everyone was happy about, teaching Swift with an important lesson she'll never forget.

While the whole thing between Minaj and Swift is done and over with (and it was never any of our business anyway), Swift has come away from the whole thing with a new understanding of how to handle situations like these should they arise in the future — and let's be honest, they probably will. In an interview with NME magazine, Swift advocated for thinking before speaking, and reaching out to someone personally when you're feeling confused or offended by something they've said rather than posting a knee-jerk reaction for millions to see.

"I don't want to talk about it," she said. "But I send text messages now. If there seems to be some kind of misunderstanding, I go to someone's management, I get their number and I text them. It's an important lesson for anyone to learn in 2015."

It might seem like a really obvious lesson, but I think we can all admit that we've reacted badly or completely overreacted in general to something that had nothing to do with us before. We're human and we're emotional creatures, so it's natural. It's embarrassing to be sure, and Swift had it even harder since she's in the public eye, but that doesn't excuse it. However, it's important that we learn from experiences like that and use them to change our behavior moving forward, as Swift has vowed to do. If you've heard that someone has said something about you or you believe that they've wronged you in some way, don't take it to social media — take it to the person in question. In most cases, you can solve the issue then and there without any added drama.